One of the world’s most celebrated clubs, The Haçienda in Manchester, opened 30 years ago today, on Friday May 21st 1982. In June 2007, a little after the 25th anniversary, the inimitable Manchester-based writer / musician, John Robb, author of books including ‘The North Will Rise Again: Manchester Music City 1976-1996’ (2009), ‘The Stone Roses And The Resurrection Of British Pop’ (1996) and ‘Punk Rock: An Oral History’ (2006), did a short interview with me about the club’s legacy:

WHAT WAS SO SPECIAL ABOUT THE HAÇIENDA?

The fact that this was never a club in the conventional sense, somewhere underpinned by sound business logic, but more about the passion of the individuals behind it, people like Tony Wilson, Rob Gretton and Mike Pickering, who had a vision that they could cultivate a club in Manchester that compared with their favourite New York venues, most notably Danceteria and the Paradise Garage. Had it not been for New Order bankrolling it, the club would have gone belly up in its first 12 months and we certainly wouldn’t be talking about it now, but The Haçienda was an idea that won through, in many ways against the odds, eventually bringing Manchester world status at the vanguard of dance culture. 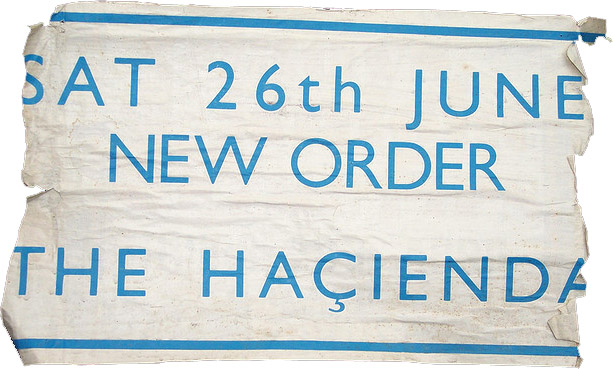 WHAT IS THE HISTORY OF YOUR INVOLVEMENT WITH THE CLUB?

In the summer of ’83, I was approached by Mike Pickering (not a DJ at this point, but the club’s promotions manager) to host a specialist dance night there on a Friday. My weekly Wednesdays, across town at Legend, catering mainly to a black audience, were widely regarded as the most cutting-edge dance music nights in the UK during the early ’80s Electro-Funk era. Mike, Rob Gretton and Tony Wilson, who’d all been along on the Wednesdays at various points, were blown away with what was happening at Legend, where most of the music I was playing was fresh out of New York on import. I was obviously someone they felt could attract a more dance based audience across to The Haçienda, the club at that time being attended mainly by students into Indie music. I suppose I was the obvious choice for the Friday, given my status on the underground dance scene, but The Haçienda wasn’t Legend and it was a struggle, for a variety of reasons, to get the black crowd in there on a regular basis. With hindsight, the club just wasn’t right at that point, and it wouldn’t be until ’84, after I’d retired from deejaying, that they moved the DJ box onto the balcony, which would certainly provide a statement of intent – the DJ previously being hidden away in a room down some stairs by the side of the stage. However, we had some brilliant one-off nights and the seeds were undoubtedly planted for what happened later down the line when Mike Pickering, continuing the Friday dance experiment, via his now legendary Nude night, built a great scene, led by the black crowd in Manchester, that would place the club in prime position when the Acid House movement exploded and the white audience wholeheartedly embraced dance music en masse.

ONE ANECDOTE THAT SUMS UP THE CLUB?

I’d moved to London in the mid-’80s, but kept strong ties via the Ruthless Rap Assassins, who I managed and produced – they got their deal with EMI following a gig at The Haçienda’s Zumbar night (which directly preceded Hot on the Wednesday). My abiding memory of the Haçienda in those ‘rave on’ days was the overwhelming response to the track “Rich In Paradise” by the FPI Project (an instrumental version of the classic “Going Back To My Roots”), which I witnessed during a visit from London. I stood chatting to Kermit (then of the Rap Assassins) in one of the alcoves when, while continuing the conversation, he raised his hand in the air as the track’s piano breakdown filled the room. In my heightened state I then noticed that all the people standing near us were giving the same type of salute. As I looked around it became apparent that everyone in the club was sharing this outpouring of togetherness, hands held high in the air! It was the most unifying moment I’ve ever experienced in a club and, although I witnessed similar sights subsequently, everything that followed seemed to be just chasing shadows, trying to re-capture something that was no longer there, at least not in its purest form. 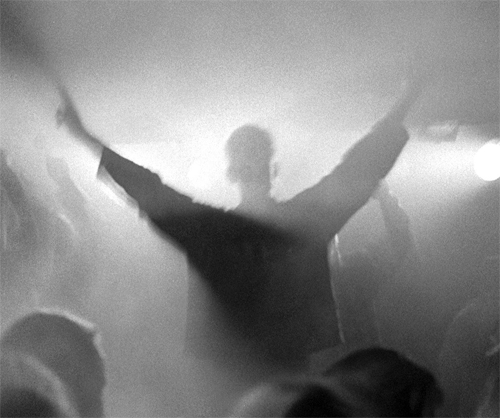 WHAT DIFFERENCE DID THE HAÇIENDA MAKE TO MANCHESTER?

One of Manchester’s major attributes in the early ’80s was that it was a very cosmopolitan city, certainly in relation to other parts of the UK. There was a crossover between the black community and the student population, especially in Hulme, so there was an open-mindedness with regards to music, which, by the end of the ’80s, had given Manchester its unique flavour, illustrated by the fact that Indie bands like the Happy Mondays and Stone Roses were inspired by dance music, pushing at the boundaries in the process and pioneering a new mutant genre, Indie-Dance (with Dave Haslam’s Temperance nights at the club every Thursday crucial to its evolution).

The Haçienda provided the focal point for this cultural pow wow, initially taking its lead from the underground black scene in the city, before House became the music of choice with the white audience (many of whom had previously been Indie kids with little affinity to dance culture) and the whole thing exploded on a mainstream level.

People will always look back on that late ’80s period, especially what happened in Manchester, with special affection. Its place in the history popular culture is assured, with The Haçienda pivotal to this. However, to view The Haçienda on its own obscures the foundations it was built on – a proud tradition of black music clubs in the city going back to the Twisted Wheel in the ’60s, and on through the ’70s and ’80s with venues like Rafters, Rufus, Legend, Berlin, The Gallery and The Playpen. These are the rocks on which The Haçienda was built. 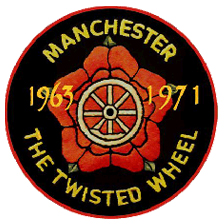 WAS IT SAD WHEN IT SHUT DOWN?

No. It was a poor reflection of its former self by that point. After 1990 the vibe had turned sour. Madchester became Gunchester and, as I said at the time in Sarah Champion’s book, ‘And God Created Manchester’ (1990), you no longer had ‘just love and peace, but ultra-violence’. The gangs had moved in to control the drug trade, so what was once positive soon turned negative. I suppose that after such an extreme high, there had to be a massive comedown. I could see the writing on the wall at the time – even at the peak of it all I knew this couldn’t sustain itself and the arse-end was an inevitability. There was change in the air, and it certainly wasn’t for the better. After 1990 it was the same building, but a very different club.

The previous year I was asked to list ‘Five Early Haçienda Classics’, although, for the life of me, I can’t remember who this was for. Anyhow, this was my selection: 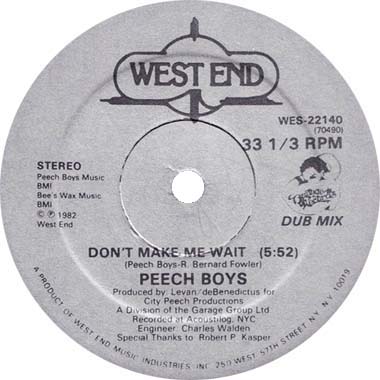 A seminal Larry Levan recording, which inspired a new dub-based approach to dance music. Huge on the specialist black music scene and featured by original Haçienda resident, Hewan Clarke, when the club opened in May ’82. Levan was, of course, the DJ at New York’s Paradise Garage, one of the clubs that inspired The Haçienda. 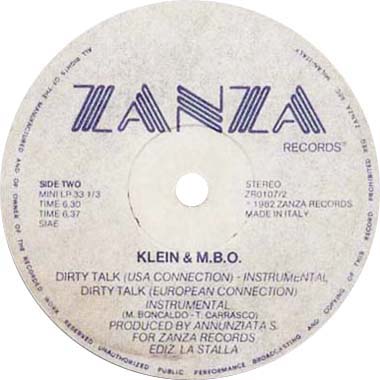 A track that I first started playing as an Italian import on my nights at Legend in Manchester and Wigan Pier. This was the groove around which New Order based their classic ‘Blue Monday’ – Hewan, being aware of what was going on across town at Legend, had picked up on the track and would loan his copy to the band after they’d heard him play it at The Haçienda one night, taking it into the studio with them whilst they worked on what would become a seminal recording. 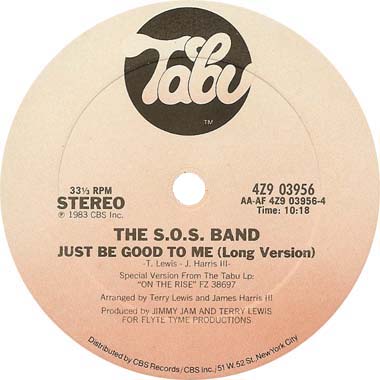 Brilliant downtempo groove, which was already huge for me when I started deejaying at The Haçienda in August ’83. Would eventually be a UK hit, but not until the following April. Norman Cook, who we met in Brighton during the Haçienda Review in Dec ’83 and, again, when The Tube was broadcast live from the Haç in Feb ’84 (the programme on which Madonna made her debut), would later cover it with Beats International in 1990 as ‘Dub Be Good To Me’, taking it all the way to number 1! 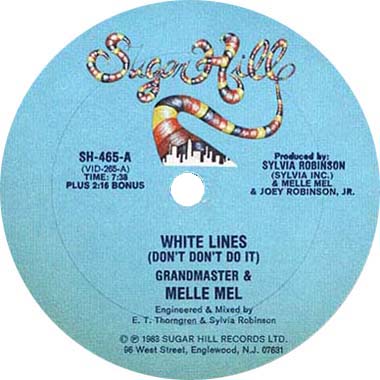 Although an instant hit on the underground scene, ‘White Lines’ would be a slow grower with the general club populace, many DJs finding it initially hard to get their heads around this unique record. Entered the lower region of the charts in Nov ’83, but dropped out after just 3 weeks. However, the momentum continued to build over the coming months and it re-entered in Feb ’84, this time going all the way into the top 10, whilst spending a mammoth 38 consecutive weeks on the chart! A truly groundbreaking record, which is nowadays regarded as something of a dance standard. 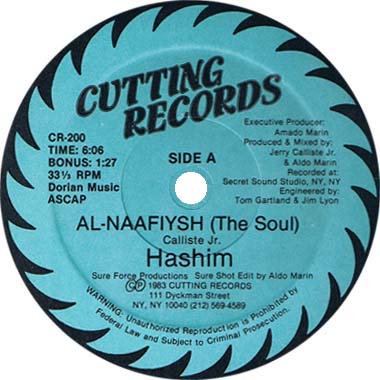 Relentless Electro cut, which came in on import towards the end of ’83 and immediately went massive on the specialist scene. A big favourite with the Manchester breakdance crew, Broken Glass, who were pretty much the clubs resident dancers at the time. Would still be getting regular plays, as a classic oldie, at the end of the decade.

Finally, I thought it’d be the perfect day to upload my ‘Walking On Confusion’ mash-up onto SoundCloud, which combines 2 Arthur Baker productions from New Order and Rockers Revenge – it’s origin was outlined by Peter Hook in his 2009 book ‘The Haçienda – How Not To Run A Club’, where the New Order bassist recalled the time I asked him if I could remix ‘Blue Monday’ back in 1983, when I was the club’s Friday night resident DJ:

“I remember him coming up to me, asking if he could remix ‘Blue Monday’. I told him to fuck off, thinking it was the most disgusting thing anyone had ever suggested – why should we let someone tamper with our work? How times change. Nowadays the remixes are often better than the originals. I don’t remember much of Greg beyond that episode, although I know he mixed ‘Walking On Sunshine’ by Rockers Revenge into New Order’s ‘Confusion’, which was ingenious. The first mash-up.”

A more comprehensive piece about ‘Walking On Confusion’ (via Nuphonic / Tirk Records in 2005), called ‘Confused Beats For Electro Freaks’, can be read here:
http://www.electrofunkroots.co.uk/confused-beats-for-electro-freaks/ 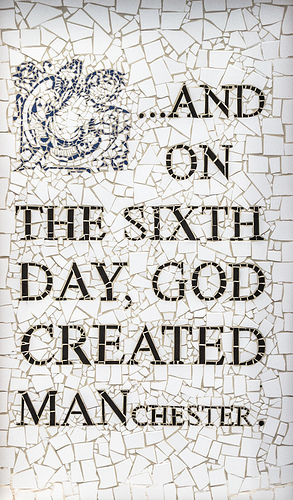 8 Responses to The Haçienda – 30 Years On