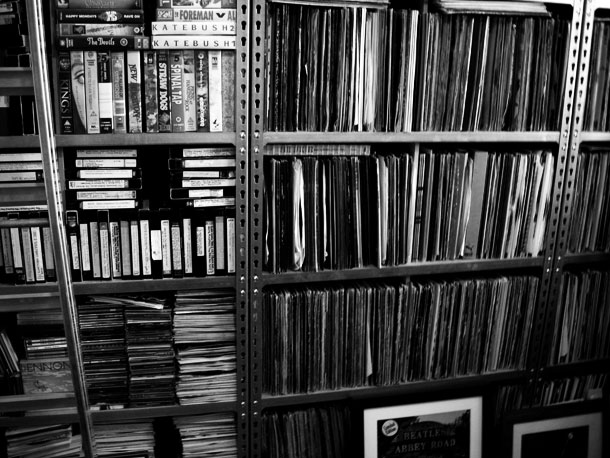 Greg began DJing in 1975. He enjoyed hugely popular residencies in the early-80s at Wigan Pier and Manchester’s majorly influential Legend, having originally started out in his hometown of New Brighton. He was a pioneer of mixing in the UK and in 1983 he became the first ‘dance music’ specialist hired for a regular weekly session at Manchester’s now legendary Haçienda club. Greg was instrumental in breaking the new electronic, post-disco records coming out of New York, a sound he has dubbed ‘Electro-Funk’. He would ‘retire’ from DJing at the end of 1983, going on to work on various studio projects, most notably with Manchester Hip-Hop crew the Ruthless Rap Assassins, for whom he’d produce 2 albums in the early-‘90s.

In 2003 he set up his own website, electrofunkroots.co.uk, to document this crucial era in the evolution of dance culture and, as a consequence, Greg returned to spinning tunes two decades on, receiving plaudits for his appearances at renowned nights including Electric Chair, Horse Meat Disco, Fabric, Back To Basics, Ministry Of Sound, Asylum, Melting Pot and the Sub Club. Before long he was picking up an ever-increasing amount of bookings throughout Europe and, subsequently, worldwide.

In 2005 Tirk Records released ‘Credit to the Edit’, a compilation of re-edits spanning Greg’s entire career, some even original tape edits from the mid-‘80s (Greg still uses a vintage Revox B77 reel-to-reel tape machine as part of his DJ set-up). This wasn’t his first compilation – he’d previously collaborated on most of the tracks to appear on the Street Sounds ‘UK Electro’ album in 1984, as well as being the selector behind the ‘Classic Electro Mastercuts’ LP in 1994.

Other firsts for Greg include being the first DJ to mix live on British TV (The Tube in 1983), putting together the first UK radio mixes of their type for Piccadilly Radio in Manchester (beginning 1982) and showing a certain Norman Cook (later Fatboy Slim), then a young aspiring DJ called Quentin, how to scratch (Dec ’83). Greg has written for magazines including DJ Magazine, Wax Poetics, Clash and Grand Slam.

2008 saw Greg go truly global, embarking on an end of year tour that literally took him right around the world, with dates in Japan, Australia and Brazil, following-on from a series of gigs in the US (a return to New York and his San Francisco and LA debuts). Now a firm favourite on the festival circuit in the UK, Europe, North and South America plus Australia and Japan, he also played Ibiza for the first time in the summer of ’08, including a terrace appearance at the famous We Love Sundays session at Space.

In January 2009 Greg’s reputation was further enhanced when his Essential Mix on BBC Radio 1 became something of an instant classic, receiving almost universal acclaim and, in the process, providing the perfect way to commemorate the 5th anniversary of a remarkable renaissance.

Credit To The Edit Volume 2 was released in November 2009. With tour dates throughout the following months in the UK, Europe, Japan, Australia and the US to promote the release.

In April 2010, as part of their Essential Mix 500 special, Radio 1 selected Greg’s Essential Mix as one of 10 classics that spanned the shows near 17-year history, whilst in 2015 it was selected as one of Rolling Stone magazine’s 25 greatest internet DJ mixes of all time.

Greg’s Blog, ‘Being A DJ’, was launched in June 2010. He describes it as “not a DJ blog as such, but more a blog by someone who happens to be a DJ”. The blog is now well established, Greg’s observations on various aspects of club culture becoming an online touchstone for an ever-increasing amount of dance enthusiasts and aficionados.

In August 2010 he co-curated the Warehouse and Roller Disco areas at the inaugural Vintage Festival at Goodwood, which proved to be an overwhelming success, being named ‘Best New Festival’ at the UK Festival Awards (Greg also being nominated in the ‘Best Feel Good Act Of The Summer’ category). The following year he co-curated the Warehouse and Style Studio areas as Vintage was hosted at London’s Southbank.

Greg is also highly active on SoundCloud, where his mixes, edits and podcasts have picked up almost six and a half million plays since he opened his account in 2009.

Greg has produced a series of documentative podcasts, Time Capsule, Random Influences and Early 80’s Floorfillers, as well as the long-running blog series, Living To Music, where people were encouraged to listen to a monthly album selection in their home environment. This served to influence other related events, Colleen Murphy’s successful Classic Album Sundays audiophile experience included.

Away from the dancefloor, Greg has given talks on music and DJ culture at settings including The Tate Gallery in Liverpool, London Southbank and London ICA and at various festivals, perhaps most notably as part of a panel alongside legendary figures Nile Rodgers and Giorgio Moroder at ADE in Amsterdam. Greg has also been interviewed for a number of books, TV and film projects focusing on the history of club culture.

In 2014 he unveiled his new multi-media label Super Weird Substance, re-connecting with Rap Assassin Kermit Leveridge to unleash ‘the uplifting, life-affirming’ mixtape, ‘Blind Arcade Meets Super Weird Substance In The Morphogenetic Field’, before following it up with a series of 5 Super Weird Happenings in different locations across the UK.

December 6th 2015 was the 40th anniversary of Greg’s first club date, and the following week Greg was presented with DJ Magazine’s Industry Icon award. His ‘Discotheque Archives’ series for the magazine would subsequently run for 25 editions between 2016-2018, documenting classic DJs, clubs, records and labels.

The Credit To The Edit series returned in April 2018, with a third volume, this followed a series of Credit To The Edit club nights in the UK and Europe, with support from collaborators Derek Kaye, Peza and Henry Greenwood, and, after the release, a trio of Australian dates with Late Nite Tuff Guy and Dr Packer. Greg also became more active in the studio, working on various remix and re-edits projects, plus a batch of new recordings for Super Weird Substance, to be issued during 2019.