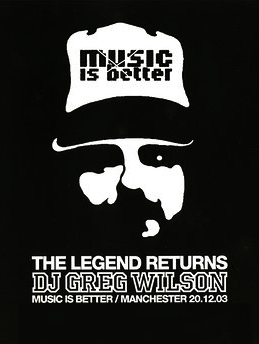 This Friday it’s the 10th Anniversary of the gig that marked my return as a DJ, and I’m celebrating the occasion with a special event at Underdog in Manchester, which is just around the corner from The Attic, the club that hosted the Music Is Better night that did so much to re-launch my DJ career 20 years on from when I’d originally left it behind. Also appearing will be Danny Webb (co-promoter of Music Is Better) and Solid State (aka Richard Hardcastle), who also played on that night back in 2003. Neil Scott from El Diablo’s Social Club, who’s done so much in keeping the Manchester flame alight post-Electric Chair, has helped me put the event together. Further info and press release here:
http://www.residentadvisor.net/event.aspx?536821

Whilst I’ve been digging through a few old files relating to Music Is Better I came across some comments that had been left on a handful of the dance music forums in the days that followed. I’d forgotten all about these, so it brought a smile to my face to rediscover this little time capsule and remember just how good it made me feel that these people, after only one gig, already had so much faith in me. It wasn’t as though the place was packed, there were probably only about 90 people there, but as I’ve said before – they were the right 90 people.

These words (and in some subsequent cases, the actions of those who shared them) were vital to the successful navigation of those crucial early stages of my comeback. A turn out of just 90 people could easily have been deemed an anti-climax, especially when the promoters had billed my appearance, with some fanfare, as ‘The Legend Returns’, but there was no negativity whatsoever – it was good vibes all round. They say the best recommendation is word of mouth, and this is certainly a case in point. Furthermore, the fact that it wasn’t just people from Manchester who were welcoming me back with such open-armed positivity, but from Sheffield, Birmingham, Leeds, Newcastle and London (and perhaps a few other places), helping spread my name further afield and resulting in bookings in all of those cities during 2014.

I’d like to take the opportunity to publicly thank these people a decade on, and if any of you are reading this and would like to come along on Friday, just let me know. You’re more than welcome. You can read the comments here: https://blog.gregwilson.co.uk/forum-feedback-greg-wilson-comeback-at-music-is-better-manchester-20th-december-2003/

Although the night wasn’t recorded, I re-created it after the event, editing the tracks down so I could fit onto a limited edition CD, ‘Music Is Better Re-Edited Highlights’, which was only available via Piccadilly Records in Manchester, where Danny Webb worked at the time. It’s since been shared via SoundCloud:

Looking forward to seeing both old friends and new in Manchester on Friday. Also currently looking into the possibility of a 10th Anniversary tour in 2014. I’ll keep you posted.

More about Music Is Better:
https://blog.gregwilson.co.uk/2011/09/music-is-better-re-edited-highlights/