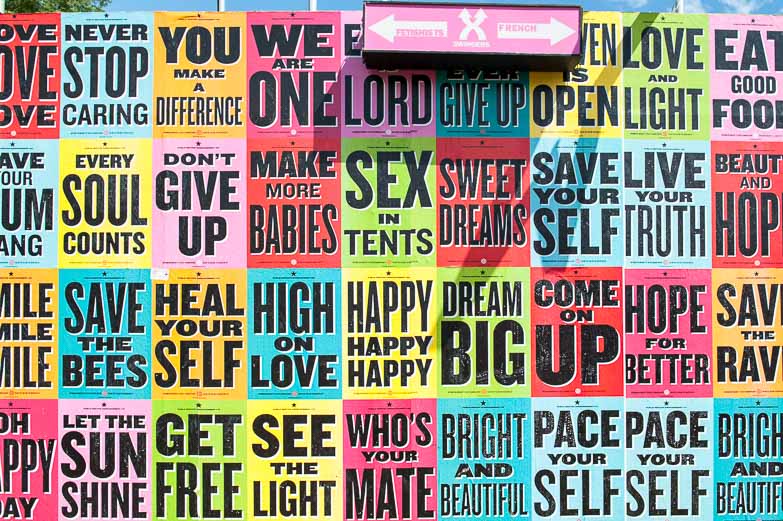 Glastonbury has become so important to me during the past 2 summers. My first appearances there weren’t until 2011, at which point my key festivals were undoubtedly Bestival and the Big Chill. However, with the demise of the latter, which left Bestival temporarily unchallenged, it’s going to be strange this year not to be over on the Isle Of Wight, having played the previous 8 Bestivals. I hope this is only a gap year, as one of the phrases I’ve heard most from people who I’ve chatted to at gigs down the years is ‘I first heard you play at Bestival’ – it’s undoubtedly been my greatest recruiting ground, and the scene of some incredible memories for me, especially the Rizla Invisible Players years, and more recently in the Bollywood tent.

Although my debut year at Glastonbury was the perfect introduction, I didn’t get chance to take in the wider festival vibe, driving onto an extremely muddy site and playing on the Wow! stage, before being transported around the perimeter to Block 9 and NYC Downlow. Then it was back around the perimeter to where my car was and, with a push to help me on my way, straight off site and homeward bound. It was more a case mission accomplished and get out while the going’s good. There’s a short blog post about it, including mixes, here:
https://blog.gregwilson.co.uk/2011/06/glasto-wow-downlow/

Last year was when I was really touched by the Glastonbury magic, spending a couple of nights onsite, and finding myself truly bowled over by the crowds who turned out to see me play, and the incredible atmosphere they generated, both in the Stonebridge tent and, as night turned into day, at Genosys, the Block 9 outdoor arena. It moved me to get my feelings down in a blog post, ‘Glastonbury – The Greatest Show On Earth’:
https://blog.gregwilson.co.uk/2013/07/glastonbury-the-greatest-show-on-earth/

This year I found myself taking 3 gigs, all on the Friday, the first back at Stonebridge, but this time starting at 2pm in the afternoon, then it was onto the Beat Hotel for a 6pm start, and finally, once again 4 hours on, at 10pm, for my Genosys finale. There was a certain order to my itinerary amidst the essential chaos of the Glastonbury experience. No sooner had I finished one gig and broken my equipment down, then it was on to the next to set up again – the day passing by very quickly in the process. As they say, time flies when you’re having fun.

I’d like to thank everyone who turned out to hear me play – it was really special for me to receive so much support, each of the appearances a joyous gathering of party people giving it up to the groove. Recordings from all 3 are now available to stream / download on SoundCloud:

Glastonbury has emerged as an integral part of my summer schedule, something that I hope to build upon during the coming years. It’s the festival of festivals – the only one I can think of with anything close to the aura that surrounds it is Burning Man in the Black Rock Desert of Nevada, which is perhaps the most significant omission in my list of clubs / events I’ve yet to play – hopefully this will be rectified in the next couple of years.

A special mention to Kermit, Debi, Scott, Jacky, Windy, Sharon and Dave – great to share the experience with you. Looking forward to doing it all again in 2015, and hopefully spending more time on site (I had to get away early this year as I had another festival over in Holland to get to).