On Easter Sunday, The Date @ Loft Studios in London hosts a ‘Disco Special’ All-Dayer, commemorating it’s 2nd birthday with 8 hours of music, commencing at 4pm in the afternoon and continuing until midnight. I’ll be appearing alongside New York’s Studio 54 legend, Kenny Carpenter, plus Baleraric favourite Phil Mison, Faith’s Dave Jarvis, and residents Stuart Patterson and Tim Keenoy. All the info is here:
http://www.residentadvisor.net/event.aspx?563538

Loft Studios is one of my favourite London spaces. I made my debut there for ‘A Night with…’ in 2012, playing a marathon 8 hours, before returning last year for The Date, and a hook-up with New York luminary Danny Krivit – you can stream / download the recording here:

Growing out of the Mod scene of the ’60s, All-Nighters were synonymous with Soul music, and later Funk, the DJs priding themselves on playing the latest imported black music (or, in the case of the Northern Soul scene, rare US 45s). All-Dayers were initially an offshoot of the Soul All-Nighters, the events generally held on Sundays or Bank Holiday Mondays, kicking off about 2pm in the afternoon, and going on until around midnight. What happened during the ’70s marked the development of a whole new direction for the black music scene, and the golden era for the All-Dayer can be roughly dated from the mid-’70s to the mid-’80s. Although All-Dayers largely died off following the advent of Acid House / Rave, the term was still being used by some of the events of this subsequent era – announcing that the ‘2nd Summer Of Love Starts Here’, The Sin All-Dayer at The Astoria in the center of London on May Bank Holiday 1989 featured 3 of the fabled ‘Ibiza 4’, DJs Nicky Holloway, Paul Oakenfold and Johnny Walker (Holloway, the events promoter, having started out during the All-Dayer dominated Jazz-Funk years):

When I was starting out myself in the mid-’70s, Blues & Soul magazine was the essential publication for black music aficionados, and their coverage of the club scene, both North and South, was second to none at the time. The first All-Dayers I saw advertised were at what seemed to me to be exotic locations back then, like The Locarno in Birmingham, Nottingham Palais, and The Ritz in Manchester; old ballrooms from a different epoch that provided the ideal environment for what was very much a dance orientated audience – who liked to find a bit of floor space and do their thing. 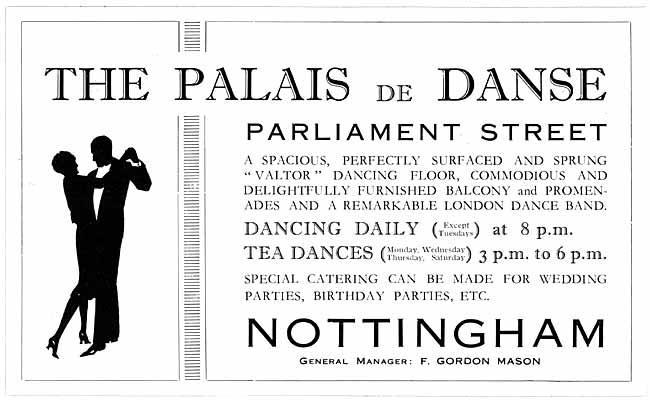 The drug associations with All-Nighters (speed being a staple of the Mod and the Northern Soul scenes) meant that it became increasingly difficult for promoters to find venues that were able to obtain the special licenses necessary to host such events. There weren’t so many obstacles in staging daytime gatherings, so, as far as the Jazz-Funk scene was concerned , the All-Dayer became absolutely central. 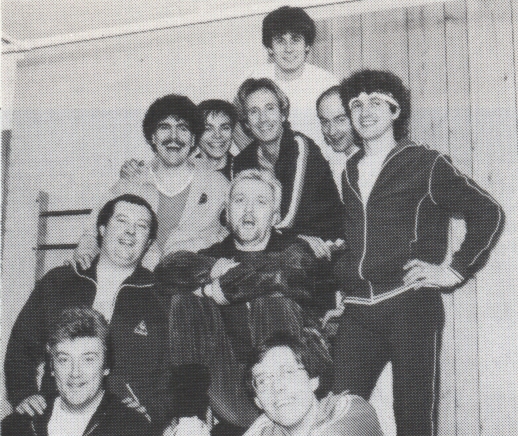 It was via All-Dayers that the South’s soon to be all-powerful Soul Mafia DJs, led by Chris Hill, really made their mark. Kicking off at the Top Rank Suite in Reading (commencing August 1976), they eventually had to find a new venue, due to ever-increasing crowds, and would really hit their stride with a major step up to the 4000 capacity Tiffany’s in Purley. Jazz-Funk All-Dayers would soon be popping up all over the South, with the Mafia in great demand – they’d even eventually move on to full weekend events at Caister Holiday Camp (which still continue to this day).

The general criteria for being booked to appear at this type of event was that you’d already have to have had established your credentials on the specialist scene, either by running a successful club night or presenting your own Soul show on a local radio station, for the DJs were, of course, expected to come complete with a fair chunk of their club crowd, the more people who followed you to these events, the greater your status – it was all about pulling power. This is what made the All-Dayers important to the overall well-being of the scene – the coming together of otherwise separate groups of people, creating a sizeable infrastructure of black music clubs, DJs and enthusiasts, both black and white, and thus strengthening inter-area ties as people happily travelled outside of their home environment to sample what was on offer elsewhere. A popular DJ could attract an audience from a wide radius of towns and cities to their club nights, and the All-Dayers provided the perfect recruiting ground for this purpose. 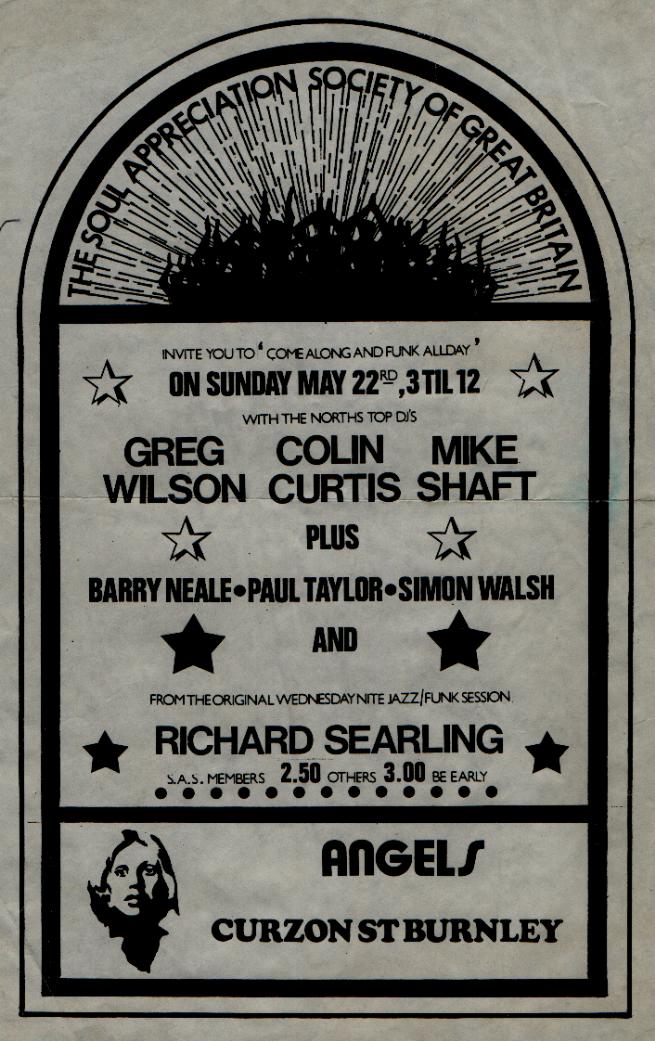 When, during the late ’70s, I looked at the impressive DJ line-ups for the Jazz-Funk All-Dayers advertised in Blues & Soul, with all the big names of the time (Colin Curtis, John Grant, Mike Shaft, Chris Hill, Robbie Vincent, Greg Edwards, Froggy etc), I could never have imagined that in just a few short years I’d be right up their on the top line of bill alongside some of them, headlining at events not only where my club nights were based (Wigan and Manchester), but in places like Sheffield, Leeds, Bradford, Birmingham, Nottingham, Derby, Burnley and Preston. 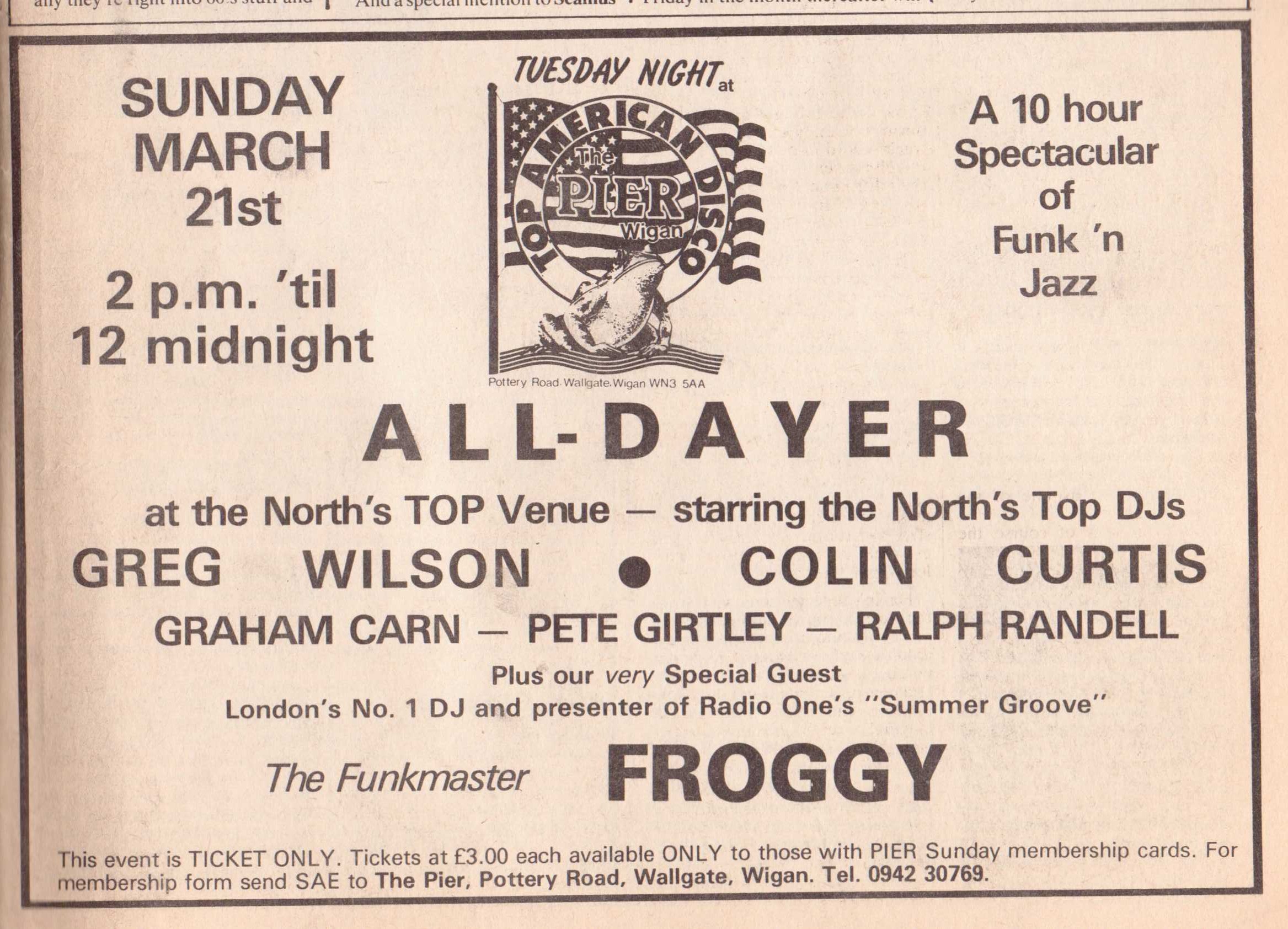 There was still a definite North / South divide at the time with DJs from the North and Midlands rarely appearing in the South, and vice-versa. I was always pushing to buck this trend, falling foul of Blues & Soul Northern club correspondent, Frank Elson when I brought Mafia DJ Froggy up North to play at a Wigan Pier All-Dayer in 1982 (but that’s another tale for another time). The only London DJ to play regularly on the All-Dayer scene in the North and Midlands throughout the early ’80s was Cleveland Anderson. There’s an interview with him here, which helps illuminate this period, as well as what was happening on the London scene during the mid-’70s – mid-’80s:
http://www.electrofunkroots.co.uk/cleveland-anderson/

The first Jazz-Funk All-Dayer I was booked to appear at was in March 1981 at Man Friday’s in Blackpool. Colin Curtis & John Grant, then a major force in Manchester, topped the bill, with support courtesy of Neil Neal from Derby, and Blackpool DJ tag team Pete Haigh & Frenchie. 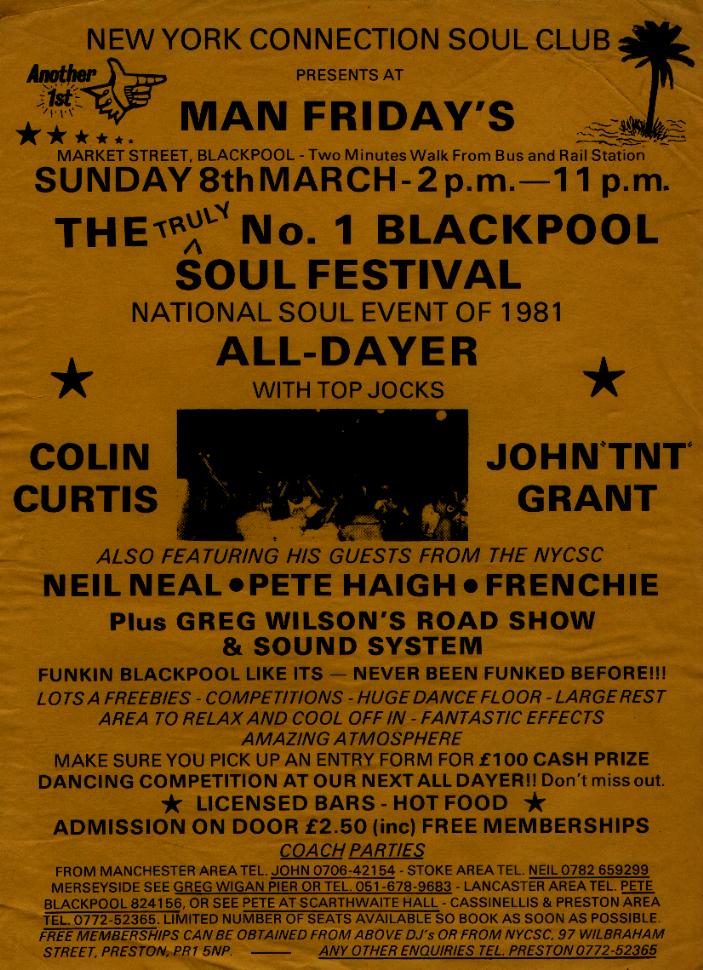 I’d taken over the residency at Wigan Pier around 6 months earlier, including the Tuesday Jazz-Funk night, which had been built to a commendable 350+ weekly attendance by my predecessor Nicky Flavell, who’d inherited the night from DJ Kelly before him (both were on 6 month contracts, the Pier opening a year before my tenure). I was on the bill for this Blackpool All-Dayer purely because the promoter came to the Pier, was impressed by the amount of people there, and thought that if he booked me I might be able to pull a healthy percentage of them to his event. Part of the condition of my appearing was that I organized a coach to bring my crowd over – this was the norm, and later down the line I sometimes put on 3 or 4 separate coaches, from Wigan, Manchester and Huddersfield (where I played at the Stars Bar every Thursday during an eventful 6 month period commencing August 1982).

It’s funny to see that in order to give my name a bit more weight, the promoter of the Man Friday’s All-Dayer concocted a completely false description – ‘Greg Wilson’s Road Show & Sound System’. Although I’d run a mobile disco back in 1975, I’d never owned something as elaborate as my own Road Show & Sound System. This was the one and only time I was billed in this way.

The most popular event in the North during the 81-84 period, when I became a regular on the All-Dayer circuit, was Clouds in Preston. The fact it was held somewhere that didn’t have a strong underground club night at the time worked in its favour, with Preston regarded as neutral ground for the crews in attendance, who came from far and wide. Towards the end of my time as a DJ, during the latter part of 1983, the baton passed to the state-of-the-art Birmingham club, The Powerhouse, with Rock City in Nottingham also absolutely essential – both clubs were active in bridging that North / South divide by booking DJs from both regions, including London’s Paul Murphy, Paul ‘Trouble’ Anderson and Tim Westwood. 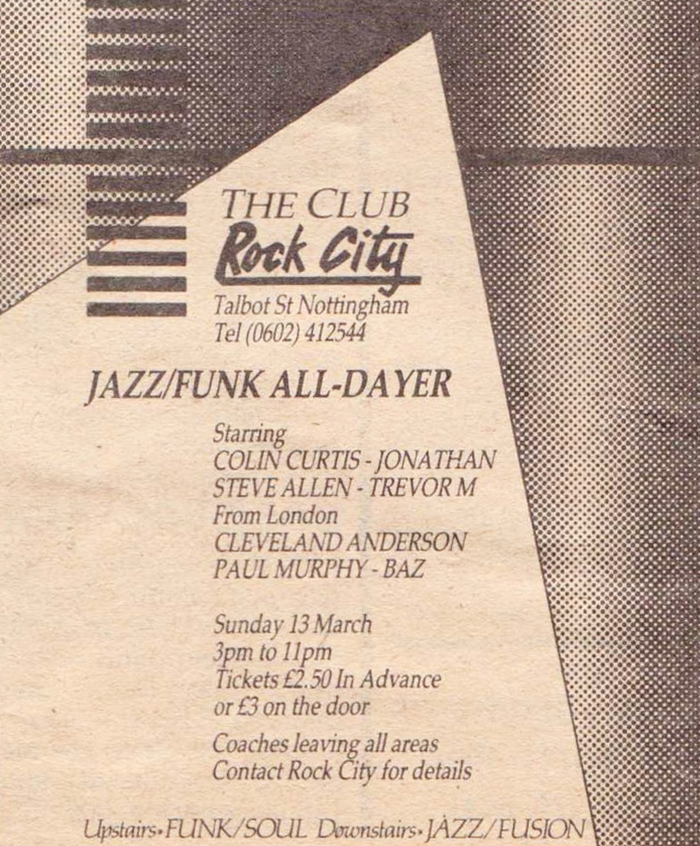 I never got to play an All-Dayer in the South back in the day, so Sunday at Loft Studios will be something of a belated debut. I still believe the All-Dayer format could work in the modern era, outside of festival season that is. All it would take would be 3 or more club nights within the same region to agree on a suitable neutral venue, possibly off the beaten track, and organize a couple of coaches from each club – that would ensure 300+ in attendance without accounting for those who’d prefer to get there under their own stream. I’m sure that the spin-off, new friendships having been forged, would involve a fair amount of these people subsequently checking out each others club nights further cross-pollenating. It’s from these small acorns that scenes grow and thrive.

Looking Back Moving On
Making A Fool’s Leap

2 Responses to The All-Dayer