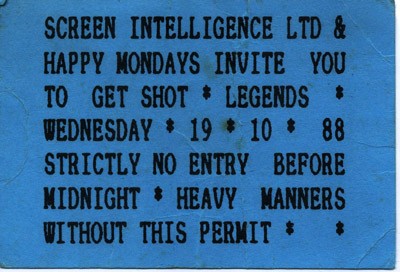 This is particularly precious footage for me, given that both these promo videos were filmed at the club where I experienced my ultimate DJ highs back in the early ’80s, Legend in Manchester. This is the only footage of the club I’ve seen (although Juliana’s, the company who installed the sound and lighting, are likely to have filmed in there for their own purposes).

The video for ‘Wrote For Luck’ had the theme of a children’s party, with a multi-racial audience, which seemed to sum up the cultural melting pot that had been stirring in the city for a number of years. Whilst I’ll never forget the first time I saw the video to ‘WFL’ – this time the children had been replaced by a club full of what were now termed ‘ravers’. A brilliant visual representation of those early ‘E’ days, perfectly capturing the time and the vibe, this video obviously made a deep impression on me. Seeing the same dancefloor that had been packed with black kids on my nights earlier in the decade, now full of white kids, was hugely symbolic of the way youth culture in this country was changing.’ https://blog.gregwilson.co.uk/2011/08/legend-manchesters-other-club/

1988-1990 were the peak years of what came to be regarded as the Madchester era, when The Haçienda was at its height and A Guy Called Gerald and 808 State recorded classic dance singles, gaining hit status in the process, whilst the Happy Mondays and the Stone Roses were at the forefront of a new mutant genre, Indie-Dance, with DJ Dave Haslam its champion via his Thursday night sessions at The Haçienda. The term Madchester came into common use after the Mondays released their ‘Madchester Rave On’ EP in ’89, along with a video of the same name, which featured many of their best-known tracks, and included the promos for ‘Wrote For Luck’ and ‘WFL’ (sadly, it’s never been issued on DVD). 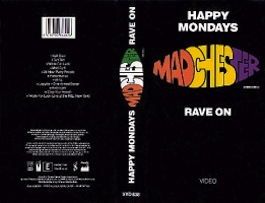 This was at a time when the Happy Mondays still had a cult following, prior to the band making their commercial breakthrough in 1990 with their album ‘Pills ‘N’ Thrills And Bellyaches’, which was produced by Paul Oakenfold and Steve Osborne. Oakenfold’s association with the Mondays began with his mix of ‘WFL’ (assisted by Terry Farley), pressed back to back with the Vince Clarke mix, which is the version used in the video (Clarke had scored hit after hit throughout the ’80s with Depeche Mode, The Assembly, Yazoo and Erasure). ‘WFL’ was, of course, ‘Wrote For Luck’ remixed.

I was a big fan of the Mondays at this point – along with the Roses, they were regarded as the coolest band in the country, right at the vanguard of this E fuelled era of baggy bravado. Following the introduction of MDMA into Manchester (the legend has it that Mondays dancer and vibesman, Bez, was the catalyst), an ever increasing number of white kids turned on to the dance grooves previously associated with the black scene. The underground was about to go mainstream, and Manchester was right at the cusp of things. The Happy Mondays had anticipated this with the release of ‘Wrote For Luck’ in ‘88, an addictive downtempo groover and the key track in their memorable live sets of the period, which echoed back to the Punk-Funk ethos of an earlier time. 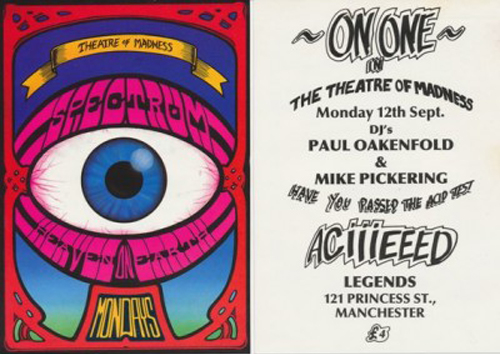 The videos for both ‘Wrote For Luck’ and ‘WFL’ were directed by the Bailey Brothers (Keith Jobling & Phil Shotton), who claimed to have coined the term Madchester. During recent years I’ve attempted to track them down, but without success, as there are a whole heap of questions I’d like to ask, like ‘why Legend?’ – most people assume the videos, especially ‘WFL’ were shot at The Haçienda, given that the Mondays were signed to Factory Records and Factory owned The Haçienda. Although Legend had hosted his Spectrum parties in Manchester during this period, Paul Oakenfold, in his authorised biography, seemed oblivious to its history, despite having phoned me on a number of occasions when I was still working there earlier in the decade, in the days before he’d hit the big time, to ask what records I was playing – the book is embarrassingly wide of the mark in describing it as ‘a mainly indie venue that had gained favour during acid house’. I’d also ask the Bailey Brothers ‘was there any intended symbolism in the decision to use a multi-racial cast of school kids in the video for ‘Wrote For Luck’, given Legend’s legacy with regards to the black scene earlier in the decade, and who were these kids?.’ So, if anyone knows their whereabouts I’d appreciate it if you could give me a heads up. 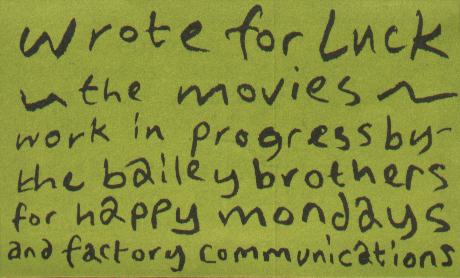