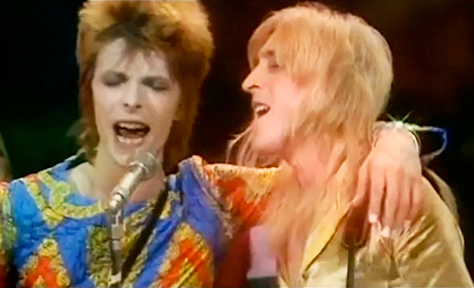 Like so many of my generation I was transfixed to my TV screen exactly 40 years ago today, when David Bowie performed ‘Starman’ on Top Of The Pops, and Ziggy Stardust, the singer’s alter ego, burst ever so brashly into public consciousness, ushering in a new era for Pop music.

There’s a YouTube link to this TOTP landmark in my Hazy Cosmic Jive blog piece, where I focus on a mix I did for New York’s Beats In Space, which was influenced by (and includes) ‘Starman’:
https://blog.gregwilson.co.uk/2010/10/hazy-cosmic-jive/

I talked about my Bowie / Ziggy obsession when ‘The Rise And Fall Of Ziggy Stardust And The Spiders From Mars’ was the Living To Music selection 18 months ago, so, to save me repeating myself, I refer you to here:
https://blog.gregwilson.co.uk/2010/12/living-to-music-david-bowie-the-rise-and-fall-of-ziggy-stardust-and-the-spiders-from-mars/

BBC 4 marked the anniversary with an excellent documentary, ‘David Bowie And The Story Of Ziggy Stardust’, which covered Bowie’s early career, and his struggle, following his first Top 10 single, ‘Space Oddity’ (1969), to shake off the ‘one hit wonder’ tag he’d been labelled with. In retrospect, it’s incredible to think that ‘Hunky Dory’, his classic 1971 LP, totally flopped on release (it would eventually enter the UK chart in ’72 on the back of his ‘Ziggy’ success, and climb even higher, to #3, ‘Ziggy’s’ peak position being #5 – Bowie’s first #1 album would be the 1973 follow-up, ‘Aladdin Sane’, which he described as ‘Ziggy goes to America’). 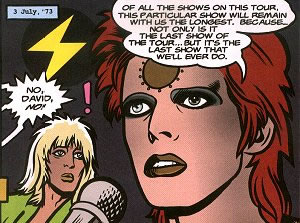 The programme then outlined the evolution of the Ziggy character, and his band, The Spiders – Mick Ronson (guitar), a whole creative force in his own right who was absolutely crucial to the project, along with Trevor Bolder (bass) and Mick ‘Woody’ Woodmansey – through until the stunning conclusion on the final tour date, when, before the last song, ‘Rock And Roll Suicide’, the shock is audible as Bowie announces that this is not only the final date of the tour, but Ziggy’s last performance ever (something Bolder and Woodmansey weren’t even aware of). The concert, which took place on July 3rd 1973 at the Hammersmith Odeon in London, 3 days short of the ‘Starman’ Top Of The Pops anniversary, is hallowed as one of the all-time great live concerts, and was recorded for posterity by the acclaimed American documentary filmmaker, D. A. Pennebaker, whose previous contributions to popular culture included ‘Monteray Pop’, capturing the first major rock festival in ‘67’s Summer Of Love (with incredible performances by artists including Jimi Hendrix, Otis Redding, Janis Joplin and Ravi Shankar) and ‘Dont Look Back’ (the seminal ‘fly-on-the-wall’ insight, which follows Bob Dylan on his 1965 UK tour). 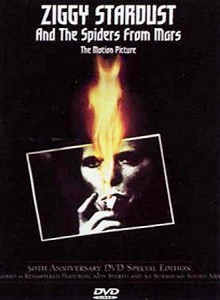 There’s so much more I could say on this subject, such was the impact that David Bowie had on me during the ’72-’74 period, when I hung on every sound and every word, totally absorbed in this prolific body of mindblowing music (for blow my young mind it did). It wasn’t just Bowie, but the whole Ziggy package, complete with the Spiders, that rocked my world. ‘Hunky Dory’, ‘Ziggy Stardust’ and ‘Aladdin Sane’ are life-defining records for me, which also happen to be the 3 LPs that all 3 Spiders appear on. So, whilst acknowledging Ziggy’s 40th, I also want to celebrate one of the great rock bands – Bowie may have had the vision and the drive, but The Spiders From Mars, especially Ronson, were the facilitators of his wildest dreams. 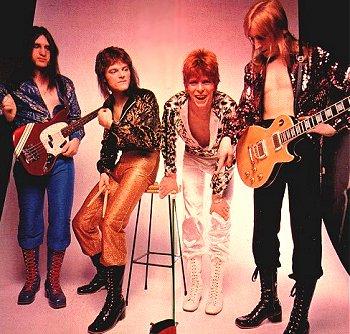