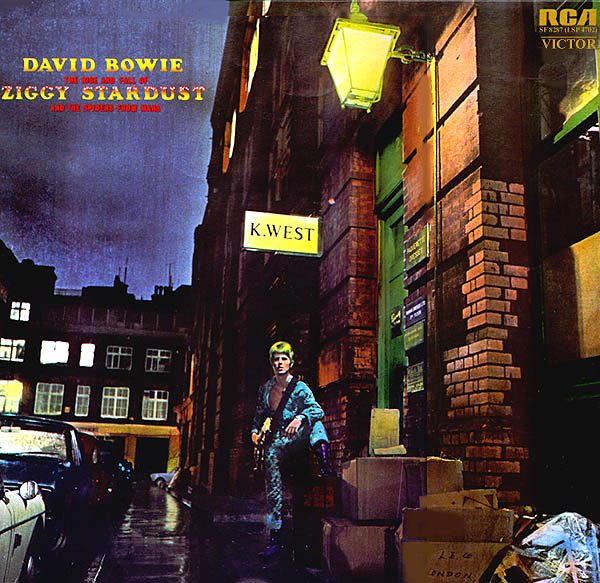 ALBUM: ‘THE RISE AND FALL OF ZIGGY STARDUST AND THE SPIDERS FROM MARS’

This Sunday (Jan 2nd), at 9pm, you’re invited to share a listening session with some likeminded souls, wherever you might be. This can be experienced either alone or communally, and you don’t need to leave the comfort of your own home to participate. Full lowdown here:
https://blog.gregwilson.co.uk/2010/06/living-to-music/

I’ve probably listened to ‘Ziggy Stardust’ more than any other album. As with so many others, my Bowie obsession began on July 6th 1972 (when I was 12) with the mesmerising ‘Starman’ performance on Top Of The Pops. It was a seminal Pop moment – I mentioned it back in October in the ‘Hazy Cosmic Jive’ blog post:
https://blog.gregwilson.co.uk/2010/10/hazy-cosmic-jive/

After buying a copy of ‘Starman’ I picked up his previous single, ‘Changes’, from Strothers, a local record shop in Liscard. I can remember being stood in one of the old style listening booths whilst the shop assistant played it for me. ‘Changes’ hadn’t even entered the lower region of the UK chart when it was issued, it had been a total flop (as was the album it was taken from, the now acknowledged classic ‘Hunky Dory’), but I was absolutely blown-away by it, as I was by his next single ‘John I’m Only Dancing’ (not to mention the one after that, ‘The Jean Genie’, a parting shot for ’72 that packed a real punch).

However, despite an incredible run of great singles, the real discovery was the albums. During the school holidays in 1973 I got a job, working in a local amusement arcade, and with my wages I bought a Bowie LP every week, until I had everything available – seven albums in all at the time, dating back to compilations of his early stuff in the ’60s. I was now a total Bowie freak, absorbed in his words and music. I tagged my name using ‘Aladdin Sane’ type lightning streaks for the Gs in Greg, and dyed my hair in Ziggy homage. It wasn’t until 1975, when he entered his Soul phase, that this fixation subsided (although I liked the ‘Young Americans’ album, I was already grounded in Soul music, so this wasn’t  a new direction for me, as it would have been for many other Bowie fans).

Looking back, I realise that it was Ziggy rather than Bowie per se that I idolised, and by Ziggy I mean the Spiders too, for this was a more than a solo artist, it was a beast of a band:

The Spiders.  The stuff of legend, rock n roll style.  Nothing as worldly as The Crickets or The Beatles.  These insects were from Mars. At first they were The Rats (from Hull, birthplace to all Spiders). Then (Mick) Ronson was lured into the Bowie fold, followed at intervals by drummer Woody Woodmansey, then bassist Trevor Bolder.  After recording the Ziggy Stardust album it was decided that to promote the record these three should be dubbed The Spiders From Mars.  Thus they were restyled, from head to toe, and the illusion was complete …. Weird and Gilly – Trevor and Woody.  Not as noticeable as the multi-talented Ronno, but an essential part of the drama.  And they knew how to play.  The Spiders were a hot band.  The hard thing for Trevor and Woody was all the attention devoted to Bowie and Ronno, of which they got to share little.  And when the band broke up they slipped back into obscurity, though Trevor would surface a few years later with Uriah Heep.  The Spiders From Mars.  What would Ziggy have done without them?

I could go on and on about ‘Ziggy Stardust’ and its incalculable impact on British popular culture (it was only a minor hit in the US, where Bowie wouldn’t take centre stage for another couple of years), but why bother when there’s such a wonderful a web resource as this for you to explore at your leisure, if you so wish – The Ziggy Stardust Companion:
http://www.5years.com/start.htm 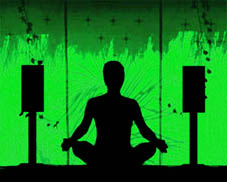 The Rise And Fall Of Ziggy Stardust And The Spiders From Mars Wikipedia:
http://en.wikipedia.org/wiki/The_Rise_and_Fall_of_Ziggy_Stardust_and_the_Spiders_from_Mars

A Christmas Gift For You
The Greatest Dancers