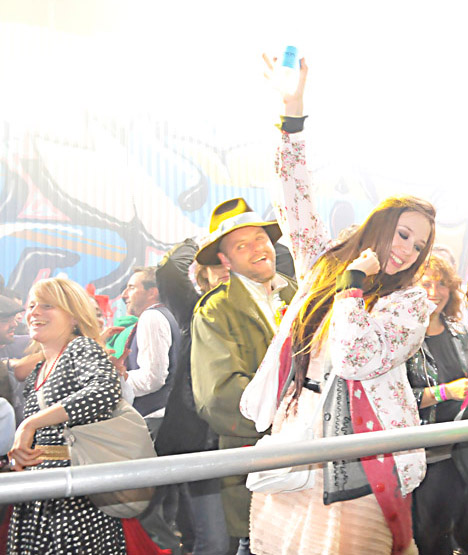 I got involved with Vintage on the back of ‘Music Played In Discotheques’, the mix of tracks I put together from the years leading up to when I stared deejaying in the clubs in late 1975, illustrating an era when disco music wasn’t a genre as such, but the music played in clubs and discotheques. This was something Wayne Hemingway and his son Jack (who’d been to some of my DJ dates) had asked me to do for the silent disco space they’d curated at Liverpool’s Tate Gallery, the centrepiece being an underlit disco dancefloor.

The mix is here:
http://soundcloud.com/gregwilson/music-played-in-discotheques-full-length-by-greg-wilson-for-the-tate-gallery

Here’s some footage from the Late At The Tate silent disco event:
http://www.youtube.com/watch?v=zqYbo10PUV0

Wayne and Jack told me about the Vintage Festival they were planning to stage at Goodwood the following summer, and asked if I’d be interested in curating the Warehouse and Roller Disco areas. Thus I became involved in an adventure that’s spawned no less than a seminal event.

As I write this, fourty-eight hours after I played the final track, I’m still radiating from the buzz of those three days in Goodwood. This was some trip for sure! There was a special vibe generated in the Warehouse throughout the weekend, especially during the hours of darkness when the arena was in full effect. The sound and lighting were absolutely top notch, worthy of what Vintage proclaimed ‘the greatest line-up of British DJs ever assembled’.

My intention from the off was that we should be celebrating the unique qualities of the British DJ in a way nobody has done previously, with the main body of those approached having helped cultivate this rich dance culture of ours via their own individual contributions, all essential to the rhythmic stew that’s been eagerly gobbled up down the years. We wanted pioneers and we got them, putting paid to the myth that Ibiza ’87 was some sort of year zero, but more the culmination of their previous endeavours, for these were the guys who laid the blueprint, some of whom are well-known names, others who’ve never received the props they deserve. Hopefully this will do something to help redress the situation and right a few wrongs.

You feel the weight of what’s been achieved when someone of the stature of Colin Curtis states;

“I have been a DJ in the UK for over 40 years and I have seen many developments and progressions through our club fashion and lifestyle cultures. I have NEVER experienced anything like this, a true fantasy with a unique vibe in an unprecedented setting”.

Casting my mind back to Friday evening, I was really concerned that our Warehouse weekend was about to be spoilt by the weather. I’d taken a wander around the site and, with the rain pouring down, The Torch, Let It Rock, the Leisure Lounge and the Soul Casino (all enclosed, and each incredible in its own right), were full and thriving. By contrast, the Warehouse‘s open air design was working against it, hardly an appealing place to be without a raincoat during a downpour, so we cursed our luck and crossed our fingers for a dryer night. Then, hallelujah, the rain stopped on cue for A Guy Called Gerald, and things really took on from that point. By the time Noel Watson stepped up to the plate things were really cooking and I was as blown away as everybody else by the ace light show, which perfectly complimented an absolute killer of a sound system. As with all aspects of Vintage, attention to detail is everything – if there was going to be a Warehouse, with a line-up of legendary names, only the best sound and lighting would do – it was a total experience we were after. 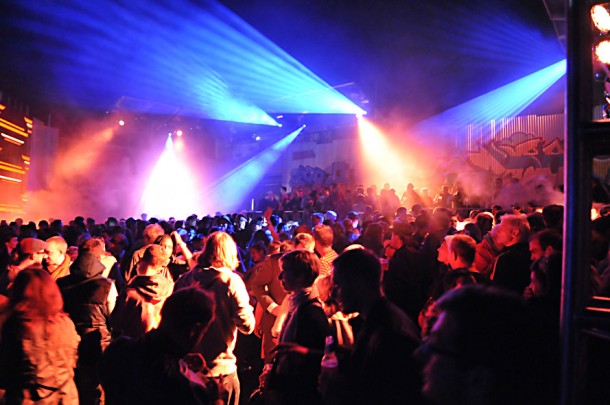 One of the biggest thrills for me was when I saw The Warehouse from a distance at night – smoke was raising from its open roof, changing colour with the lights – it was an awe-inspiring sight, glistening away in its full splendour. Inside it was really pulsing with energy – during the final hour, whilst Danny Rampling played, there were so many people trying to get into an already packed arena that the police on site, seeing how swamped it was, all descended upon it to sort things out – it certainly evoked memories of the proper old fashioned illegal warehouse parties of the ’80s for some of the older heads in attendance, we couldn’t have planned it better if we’d employed actors!

The skies opened a couple of times on Saturday, but this didn’t manage to dampen proceedings for long and the arena filled up a lot earlier than the previous day, the festival now at full capacity. By the end of an unforgettable day of highlight upon highlight I said to Jack that even if there was a monsoon on the Sunday the event would be still remembered as a runaway success. Twenty-four hours on from an inspired appearance, Norman Jay, bowled over by the experience, would twitter; “just returned from far & away the BEST UK festival experience this year! For me personally, VINTAGE @ Goodwood had it all.” For someone so associated with both festivals and warehouse parties, that’s quite a heavyweight endorsement.

The weather on Sunday was what everyone had hoped for, not even a touch of drizzle, so we were able to end the weekend both dry and super satisfied. Having played the opening track, Aurra’s ‘Such A Feeling Pts 2&3’, almost sixty hours earlier when Luke Unabomber was slightly late on site, I finally arrived at the concluding one, the Bionic edit of the Electric Light Orchestra’s ‘Last Train To London’. 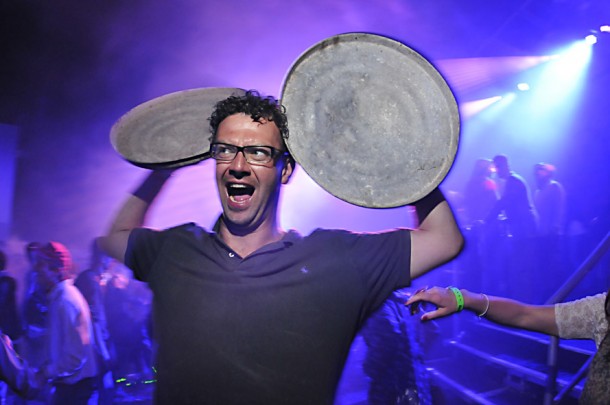 To have a vision is one thing, but to pull it off takes big balls, especially when you’re launching on Friday 13th, so respect and admiration due to Wayne & Gerardine Hemingway and Goodwood owner Lord March, the festival’s founders – what they’ve done really raises the bar. Big thanks to the backstage crew, led by the well crucial Maz Phiri (Artist Liason) and Ross ‘The Boss’ Bowden (Stage Manager) – it was a hub of activity throughout the weekend with a veritable who’s who of DJ’s coming in and out.  Being part of a backstage team was certainly an eye-opener for someone like myself, whose previous experience of festivals has been purely on a DJ level (although there was a sense of greater involvement with the Rizla Arena when I was one of the Invisible Players in 2007 and 2008). Finally, big up to Jack Hemingway, who, as co-curator of the Warehouse and Roller Disco, I worked with the most closely. Jack’s ability is matched by his energy and enthusiasm, and whilst he’s Wayne and Gerardine’s son he’s very much a force in his own right. The Warehouse was Jack’s baby, my role being more the mid-wife who helped facilitate a somewhat difficult, yet ultimately joyous birth.

Needless to say that there’s going to be an almighty scramble for tickets next year. 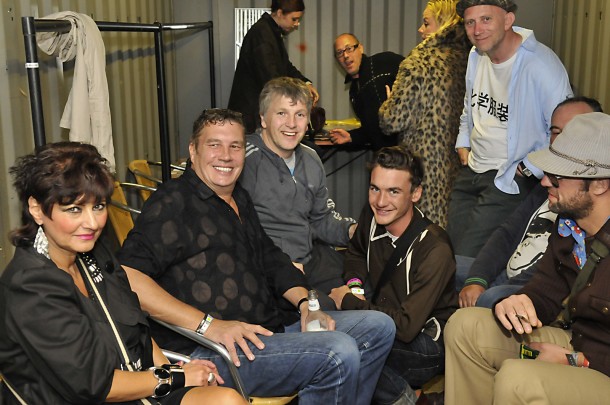 You can stream or download my full live mix from the Warehouse here: