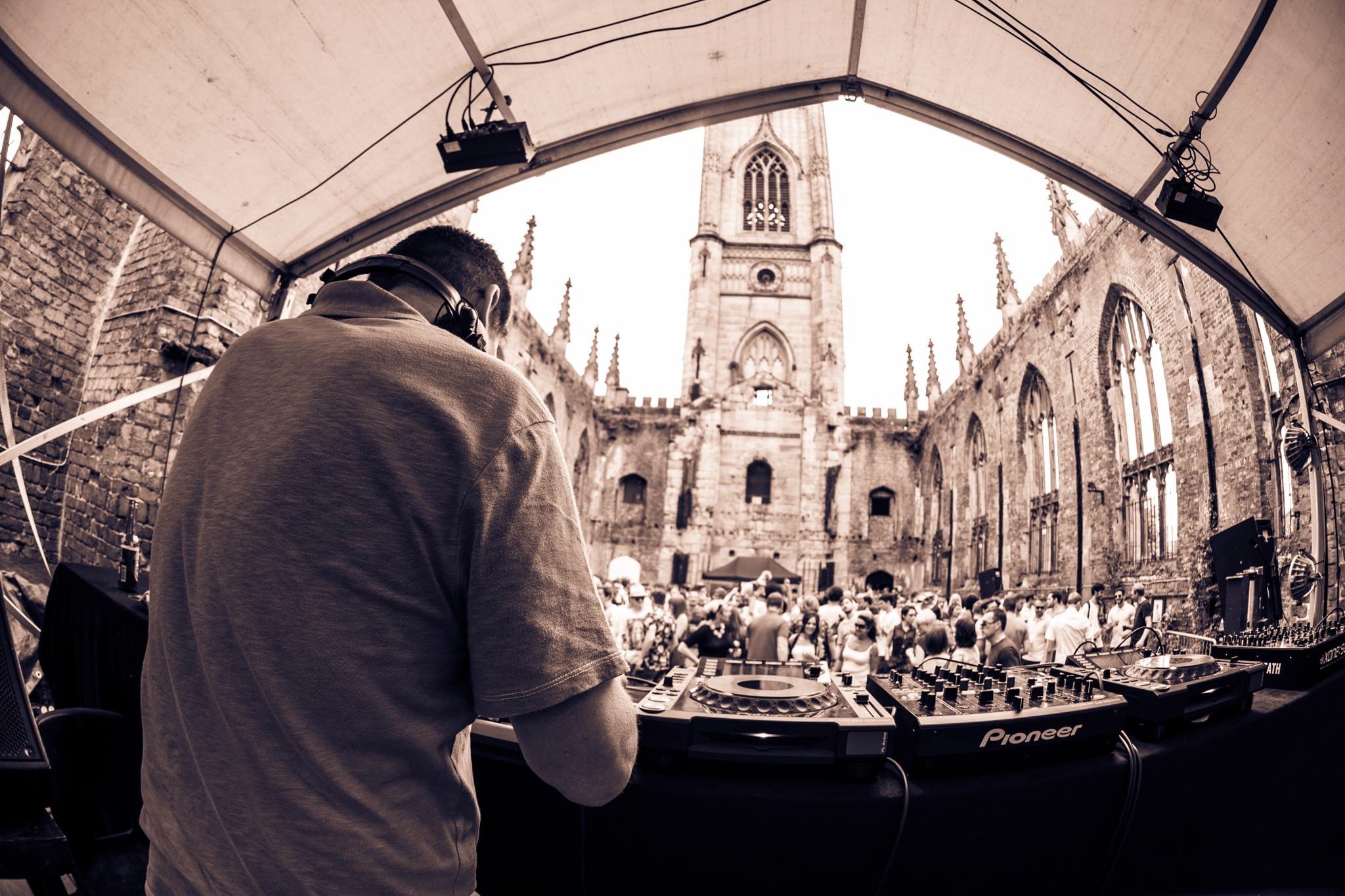 It’s been a particularly hectic period for me – within the last 3 weeks I’ve been in Ibiza, and then Glastonbury, before heading over to Croatia for the Garden Festival, with a couple of further festival appearances in Holland (Down The Rabbit Hole) and Leicestershire (Noisily) slotted in for good measure. On the back of this came a special event right on my doorstep in Liverpool, at St Lukes, a once Anglican parish church originally built in the early 19th century, which, during the intensive German bombing raids on Liverpool in 1941 was hit by an incendiary device and reduced to a ruin. The burnt out shell, without a roof, has become a city center landmark, affectionately known as ‘the Bombed Out Church’, and during more recent times has been utilised as a venue for a series of arts-based events. It’s a proud symbol of the city’s defiance, but it’s currently under threat of being taken over by developers, and potentially ending up as some fancy boutique hotel, or prime location accommodation. In a world where style so often triumphs over substance, let’s hope the Crowdfunder recently launched to help enable this iconic building to remain a community / arts space, raises the necessary financial support. Find out more here: http://www.crowdfunder.co.uk/Bombed-Out-Church

Liverpool club promoters, Freeze, hired the space last year for their initial event there, proceedings beginning in the afternoon with an after party taking things on deep into the night. It was a big success, and when they approached me with the idea of staging a trio of gigs in interesting locations, to be presented under the banner ‘Greg Wilson Summer Sessions’, the Bombed Out Church was the jewel in the crown.

I’d originally been booked by Freeze for Camp and Furnace in 2013. It was an odd one because I was on really early, from 9pm–11pm on a normal Saturday night – I’d wondered if there was going to be anyone in there whilst I played, but was assured it would be fine, which it turned out to be. In fact, it was more than fine – it was a great crowd, all vibed up nice and early, and eager to get their groove on. 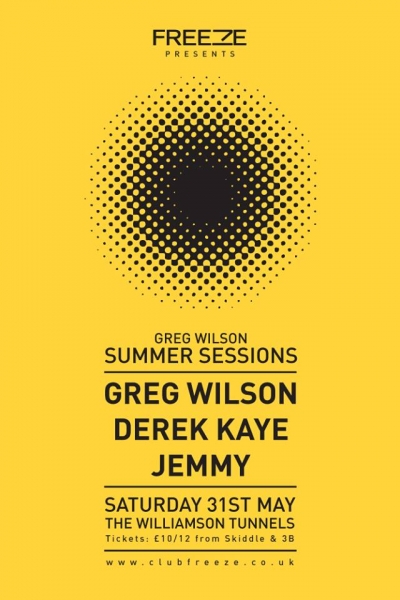 The Summer Sessions kicked off with a top night at Williamson Tunnels in May, and we were hoping to get The Kazimir for the 3rd installment, but it’s been difficult to find a date. Instead we’re now looking to gear towards our Liverpool Super Weird Happening, planned for October – we’ll announce via social media as soon as we have confirmation.

With it being an open-air arena, there were the obvious concerns about the good old British weather – it’s always a risk with this type of thing, so it was fingers crossed for some sunshine. All was looking good until the day before when the forecast said there’d be some showers coming in from the west during the latter part of the afternoon, which was exactly what time I was due to play – the event kicking off at 2pm, whilst I was rounding things off between 6 and 8pm. Derek Kaye was also playing, along with Jim Baron of Crazy P, so there was a real disco flavour to the day.

The weather was great when I arrived – there was a bit of cloud obscuring the sun’s rays, but otherwise it was fine summers day. I’d been playing the festival in Leicestershire the previous night, so had driven back having stayed in a hotel overnight. I unfortunately missed Derek – that’s him in the photo above, which gives the DJ perspective on these incredible surroundings. Jim followed, and the good vibes flowed and the weather held – that was until about 5.30 when the skies well and truly opened. Freeze were prepared though, having bought 300 plastic rainproofs to distribute amongst the audience, almost all of whom had gallantly braved the downpour, embracing it wholeheartedly rather than letting it spoil their day. 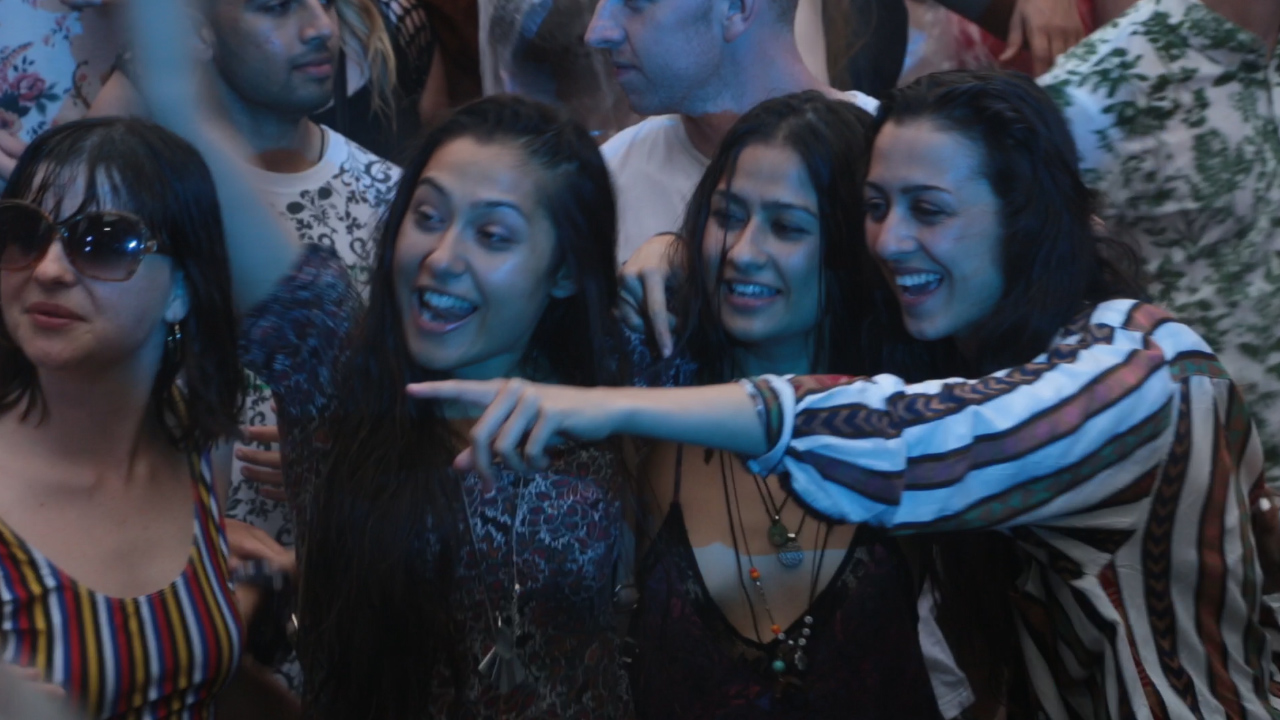 There were a few people who were a little concerned at first, thinking it might cause some to leave, or at least look to shelter, but I knew that, rather than being something negative, this actually added to the occasion. It reminded me of an amazing day at Bestival, during my time as an ‘Invisible Player’, when the Rizla arena, set up with a raised amphitheatre type structure, with people dancing at different levels, experienced one of its most memorable days with people refusing to give up the dance as the rain soaked them (once again rainproofs were available to those who wanted them). The whole spectacle was something else, many of the people in fancy dress – it was wet plastic and umbrellas aplenty, and a whole heap of smiling bobbing humanity.

This was similar, but also held a spiritual undertone given the surroundings – there was a definite feeling of peace, harmony and love throughout the day; everyone I’ve spoken to since would testify to that. This was Liverpool at its best, and I don’t think it’s over-egging the pudding to say that this event will go down in local clubbing folklore. It was already the hottest ticket in town, having sold out last month – the promoters said they could have sold it out 3 times over. Sometimes this can put too much pressure of expectation on an event, but not on this Saturday afternoon / evening – everything worked out beyond our already sky high expectations. It was a communal experience, and the environment added a poignancy that, if not thought about, was almost certainly felt by the majority of those in attendance.

Just before I went on the rain stopped and things brightened up again (at least for a while). I couldn’t resist the opportunity to open with ‘I Can See Clearly Now’ by Johnny Nash, which added to that sense of shared experience. It wasn’t just the literal meaning of the song, but its metaphorical meaning. Liverpool is on the rise again, and there’s a fresh confidence in the city, and, better still, a fresh heart. I really believe that special things will happen here in the coming years – its cycle is now due. ‘It’s going to be a bright, bright sun-shiny day’.

However, it was my closing track that gives this post its title, my ‘one more tune’ following the finale of ‘Get Back’ by hometown band The Beatles (Bonar Bradberry’s edit).

‘Oh Happy Day’ was one of those powerfully beautiful records of my youth (mashing up its religious reference via its release on the Buddah label), a massive hit on both sides of the Atlantic as the ’60s came to a close, reaching #2 in the UK and #4 in the US. Although it was a Gospel recording (which would win a Grammy in that category), not something you’d find in the UK chart back then (or on the US pop listings for that matter), this was during an era when Liverpudlian George Harrison would top the chart with ‘My Sweet Lord’ whilst producing The Radha Khrishna Temple, who would perform on Top Of The Pops, having scored a remarkable hit with their rendition of the ‘Hare Krishna Mantra’ – even the final single by The Beatles, ‘Let It Be’, had sounded like a hymn (as did Simon & Garfunkel’s epic ‘Bridge Over Troubled Water’). It was a spiritual epoch drawing to a close and these recordings, at least to my young ears, were like prayers for the changing times. They were the new hip prayers, not the boring type you were taught to repeat, parrot fashion, at school assembly. They had power and meaning.

Given it had been recorded at a church (in Berkeley, California), the symbolic act of playing ‘Oh Happy Day’ in the Bombed Out Church held huge significance to me. I hadn’t set in stone that I was going to do it, but had decided if it felt right in the moment I’d close proceedings with it – and it certainly did feel right, as right as the rain that, as the words say ‘washed our sins away’.

As it came on I was aware that a fair percentage of those there may not be aware of the track, being 45 years since its release, and were perhaps waiting for some kind of beat to latch on to, so it was fascinating to observe how, as great music can do, it gradually moved the crowd, evoking a joyousness that was infectious – it’s like you can see the holy spirit entering people, myself included.

There’s only so much you can say by way of explanation, words are never enough when you’re trying to describe a feeling, but it’s there in the footage, thankfully captured by Tim Collins – a precious 5 or so minutes we all shared on a deeper level. So, love, love, love to all in attendance – that’ll live in the memory for a long long time to come. Spiritual is the only word for it. 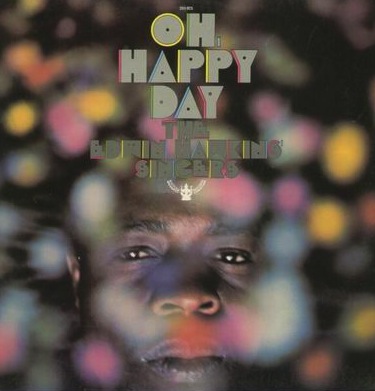