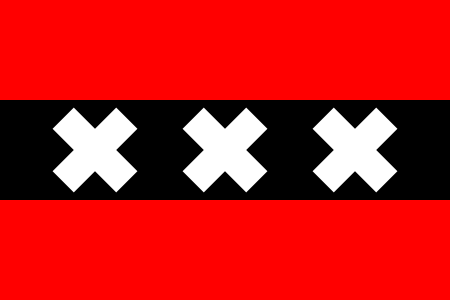 I was over in Amsterdam last weekend for ADE, one of 300,000 visitors to the city from countries all over the world for its 18th, and most successful, dance music festival / conference to date. During recent years the Amsterdam Dance Event has superseded the Winter Music Conference in Miami as the main annual gathering point for the dance music industry to schmooze and network – it’s a destination where the dreams and schemes of a multitude of DJs / producers are prevalent, as they arrive in the hope that they’ll meet up with someone who can give them their big break, or at least help them along their career path.

As one of the, shall we say, elder statesmen of the DJ community, someone who remembers the time when people would ask you ‘but what’s your real job?’ when you told them you were a DJ, it’s incredible to consider just how much this profession has skyrocketed since I was a teenager starting out almost 4 decades ago. What symbolised this more than anything for me was the ‘Your ADE DJs’ poster campaign by watchmakers TW Steel, visible throughout the city, with 4 DJs, 3 male (Delivio Reavon, Mitchell Niemeyer and Aaron Gill) and 1 female (Eva Young), shot by Amsterdam photographer Rahi Rezvani in a style more akin to an Armani or Calvin Klein fashion shoot. These were upcoming DJs, rather than established ‘superstars’, clearly picked for the physical image they project, the males tattooed and greased, with the female enigmatically looking away from the camera (an interesting comment in itself on the recent debate about sexism in the industry and how female DJs are objectified by their looks). The campaign placed these DJs in an iconic context, projecting a strong image of desirable people who play desirable music, and you can bet that a whole heap of young DJs would have been absolutely seduced by this ideal, wishing it was them up there on the billboard. It was the sophistication of the imagery that struck me. There were also the impressive hanging portraits, in classic black & white, of some of the better known DJs, which adorned the circular main hall at the Felix Meritis Centre, which hosted many of the conference panels, as well as some of the other rooms. 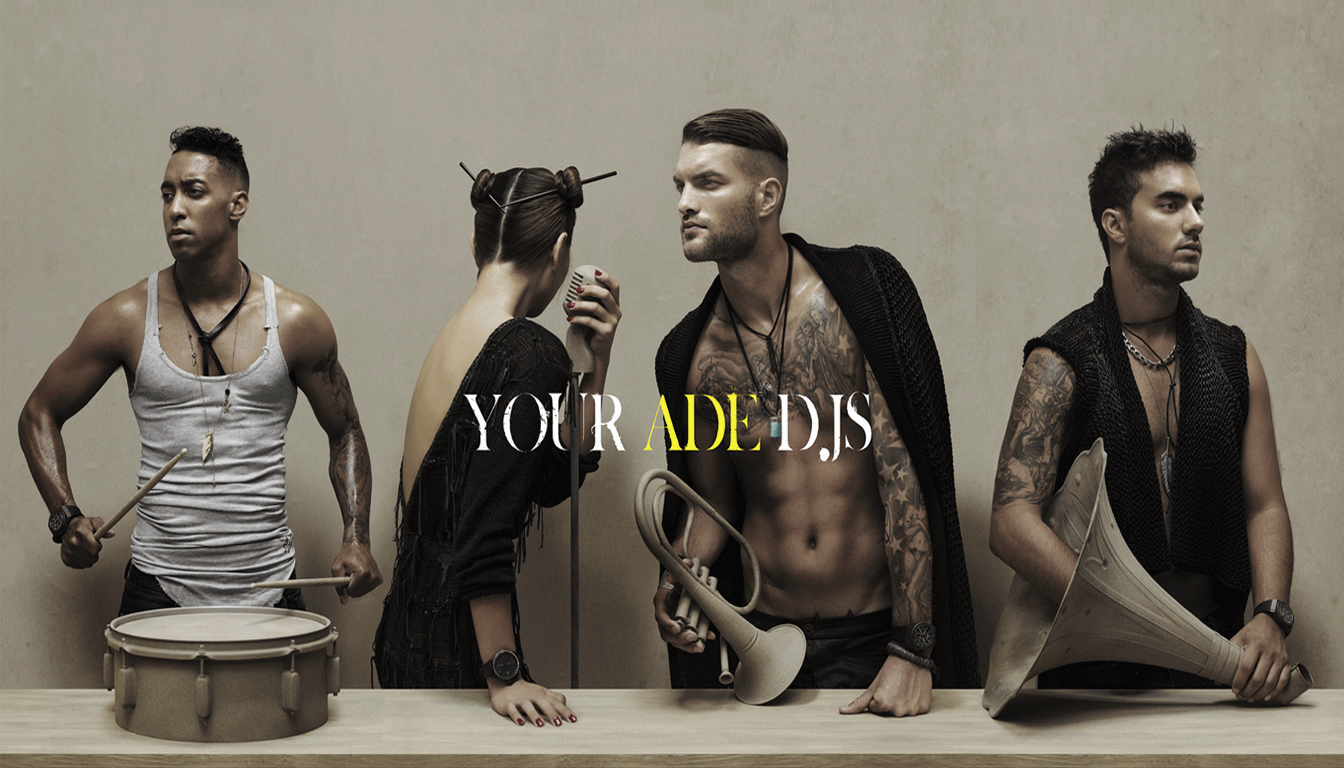 I became a DJ because of my love for records, particularly black music, so it was a natural progression for me to make a living by playing my musical choices for others, although, earning £6 a night when I started out, this was more a vocational role than the route to fame and fortune back then. DJs, by and large, have always had inflated egos; the very fact that you’re prepared to get up and select the music for a room full of people shows that you’re hardly a shrinking violet, and whilst there were always serious DJs who strove to drive the music forward, or shine a light on undiscovered areas, there were also those who were in it largely for the perks of the job. Back when I began these perks might be a bit of extra beer money, or because the role initiated greater contact with the opposite sex (these were the days when people used to be encouraged to come up to the DJ and request records), but nowadays the perks, for those who reach the upper echelons of the profession, have become huge financial rewards and the celebrity lifestyle that can accompany it. For many, the music is the means, but it’s the lifestyle that’s the end. Few would admit this, but would happily bow to these temptations if on offer, tailoring their music in accordance by following the popular trends – applying their head at the expense of their heart. In an age when DJs are held aloft as idols of popular culture, principles can quickly fly out of the window and, as a consequence, the musical integrity of those DJs who, perhaps, set out with the best of intentions, can be greatly diluted as they fall into the celebrity trap and begin to believe their own marketing myth. These are new obstacles that need to be negotiated in the modern era by those who wish to maintain their credibility as music lovers first and foremost.

Attending ADE reminded me that, even though my own career curve continues to move in a positive direction, I’m still very much a part of the underground, and more than happy to remain so – the lure of the mainstream has never appealed to me, and although it’s nice to receive recognition for your efforts, I find the ever-growing adulation of the DJ, as illustrated in this day and age by dancefloors filled with camera phone holding admirers, rather than people actually dancing, to be a more unwelcome aspect of our profession, and something that is bound to attract a large proportion of those whose primary objective isn’t to push dance music forward, but to seek their own celebrity. It’s the nature of the beast these days – too much style and not enough substance.

My reason for being there was because I was appearing at the ‘We Love Amsterdam’ party held at Air, a club I’ve played at a couple of times previously, and also to contribute to 2 of the conference panels. The first of these was pretty special, as it placed me with 2 true icons, key figures whose ’70s innovations helped set the foundations of dance culture as we know it, whilst exerting a strong influence on the pop music that followed – Nile Rodgers and Giorgio Moroder. Rodgers, along with the late Bernard Edwards, co-wrote / produced classic after classic during the late ’70s for his own band Chic, as well as Sister Sledge, before going on to work with some major pop acts during the ’80s, including Diana Ross, David Bowie, Duran Duran and Madonna. During more recent times he’s enjoyed something of a renaissance, touring extensively with Chic and gaining a whole new audience in the process, whilst collaborating with Daft Punk on their global bestseller ‘Random Access Memories’, which was released earlier this year. Like Rodgers, Moroder has returned to wider public consciousness via the Daft Punk album, with a track, ‘Giorgio By Moroder’, dedicated to him, and featuring his spoken reminiscence of starting out in the industry. As co-writer / producer (with Pete Bellotte) of Donna Summer during her Disco heyday, his credits include the seminal tracks ‘Love To Love You Baby’ (1975) and ‘I Feel Love’ (1977), whilst he also achieved success as an artist in his own right, and was dubbed ‘the father of Eurodance’. Highlights of an outstanding career include the 3 Academy Awards he picked up – Best Original Score for the film ‘Midnight Express’ (1978); Best Song for ‘Flashdance…What a Feeling’ by Irene Cara, from ‘Flashdance’ (1983); and Best Song for Berlin’s ‘Take My Breath Away’, from Top Gun (1986). Now aged 73, Moroder launched his belated DJ career at Deep Space in New York last May, and is set to make his UK debut on November 8th at Oval Space, as part of the London Electronic Arts Festival. 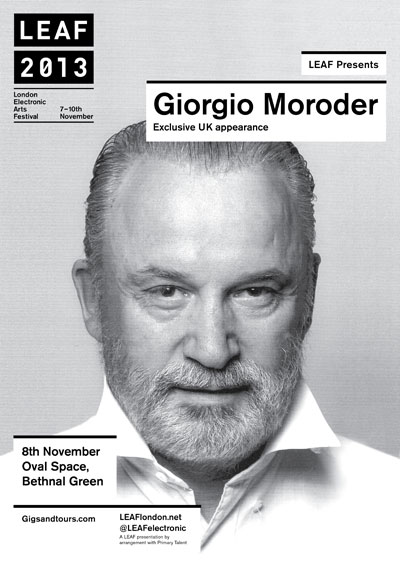 You can imagine my surprise on being invited, at the request of Brooklyn based DJ / producer Tommie Sunshine, to participate on a panel with such luminary figures, especially given the blog pieces I’ve written this year relating to them, both specifically and in reference to their collaborations with Daft Punk:

It was somewhat embarrassing for me to hear Tommie Sunshine, in his introduction, describe us as 3 dance music legends, my own contribution but a minor side note in comparison to what these 2 giants have achieved. Needless to say it was an honour to share the stage alongside them for the panel ‘Disco – How Deep are Your Roots?’ The time went nowhere, and the session seemed to be over no sooner had it begun. Nile Rodgers is such a great storyteller, as illustrated in his autobiography ‘Le Freak’ (2011), so it was fascinating to hear what he had to say, whilst Giorgio Moroder also added his own nuggets of wisdom to proceedings. Having posed with members of the audience for the obligatory photo opportunities, Rodgers got off pretty sharpish, but Moroder stuck around backstage a little longer and it was a pleasure to talk to him – a really nice guy.

The following day I was on a 2nd panel that Techno DJ, Dave Clarke, had organized, called ‘Demolition Part XVII’, alongside DJs Todd Terry, Vato Gonzalez, Chris Liebing, Sandrien and Riva Starr. I hadn’t read up on it properly, and arrived under the impression it was a production forum, but it turned out to be a competition where unsigned tracks were submitted for the panels assessment and marks out of 10 – an EDM X Factor if you like. None of the tracks featured rocked my boat, so it was a difficult situation to be in, having to find something constructive to say about music that just didn’t move me – even in ADE’s own report on the panel they stated that the submissions ‘painted quite a bleak future for dance music.’ 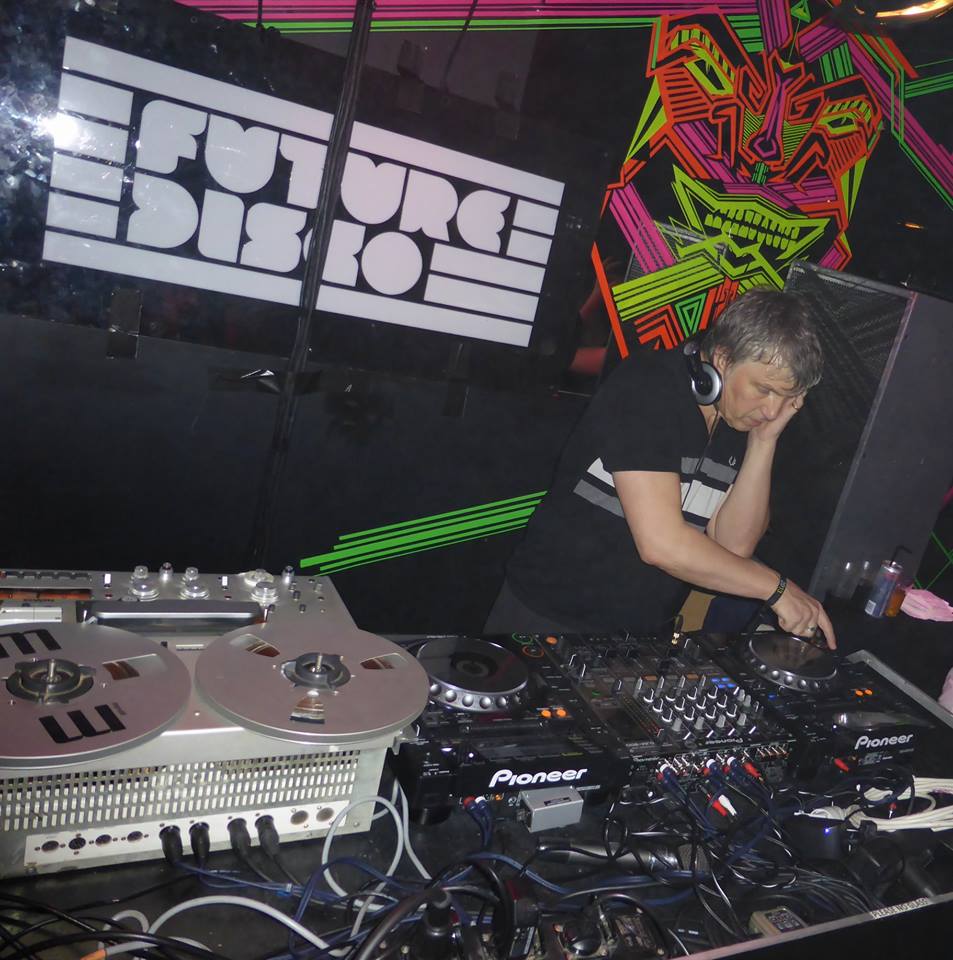 Later that evening it was on to Air, where Future Disco were hosting one of the rooms, with a line-up of PBR Streetgang, Sean Brosnan and myself. My previous appearances at Air have been in the main room, but I really enjoyed the intimacy of the 2nd room – there was a great close-up atmosphere in there, and a wonderful energy. The mix is now available to stream / download via SoundCloud (I made sure to tip my hat to both Giorgio Moroder and Nile Rodgers along the way):

Amsterdam is a city with a long clubbing tradition, a legacy documented in the new book, ‘Mary Go Wild – 25 Years Of Dance In The Netherlands’ – a commendable collective effort covering a quarter century of club culture in the country. I was given a copy following my first panel appearance, and although it’s in the Dutch language, the story is also told through some marvellous pictures, including a few of my (and many others’) favourite Amsterdam club, The Roxy, of which I have fond memories of blissed out nights in the late ’80s (the club is now long gone, having burned down in 1999). With its good time vibes and libertarian values, Amsterdam is the perfect place to play host to the various factions of our largely hedonistic global dance music industry, even those of us operating on the periphery, away from the mainstream and its larger rewards but greater scrutiny. 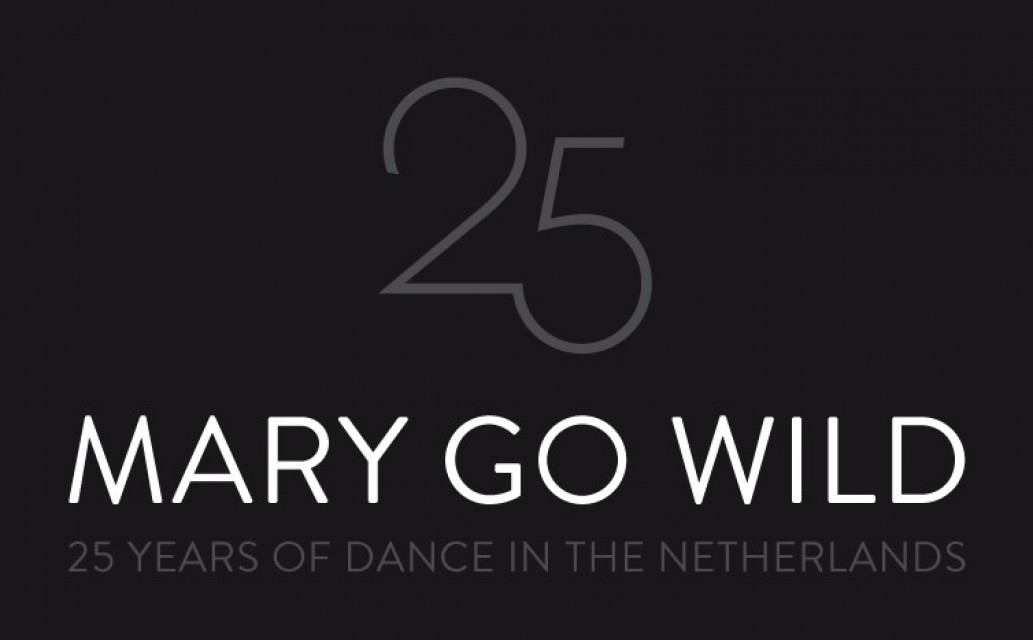