By Greg Wilson on June 13, 2013 in Black Culture, DJ Appearances 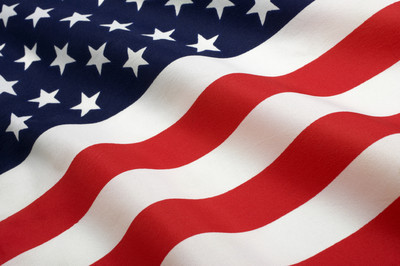 Just back from a flying visit Stateside, playing consecutive days in 3 of dance music’s seminal cities – Detroit, Philadelphia and New York. The Detroit and New York parties were both really special, but not all ran smoothly, for sandwiched in between the Philly gods conspired against us.

In Detroit I played outdoors on the Thursday at TV Lounge, from midnight to close, at 2am – it was a free ‘Appreciation Party’ in a brilliant space, courtesy of Paxahau, the organizers of the wonderful Movement festival, which had taken place the previous weekend. They’d booked me for what was, in effect, their wrap party, concluding proceedings for 2013. It had been the most successful Movement to date and, mission accomplished, everyone who worked on delivering the festival was finally able to relax and enjoy the celebratory nature of the night.

I was supposed to play at TV Lounge back in 2011 – it would have been my Detroit debut, but my visa was delayed and I ended up frustratingly having to cancel my US tour dates. As a consequence of this, my first Detroit appearance would be a Saturday afternoon main stage set at last year’s Movement, which, as it worked out, couldn’t have been a more perfect introduction to a city that, in just 2 short visits, has made such a big impression on me – as illustrated in my blog post from last year, ‘Detroit Hustles Harder’:
https://blog.gregwilson.co.uk/2012/06/detroit-hustles-harder/

A huge bonus for me was, unlike last time, when I got there to find it closed for Memorial Day, the Motown Museum was in full effect, and TV Lounge manager Josh Guerin was kind enough to take time out from setting up the venue to drive me along in the afternoon. I’d expected it was, as with The Beatles Museum in Liverpool, somewhere you walked through at your own pace, but they had a tour guide, and it became a communal experience, which was especially poignant given that our group included some highly vociferous elderly black ladies who’d lived this whole thing first hand, as it originally unfolded, before mushrooming to global proportions, announcing Detroit as a world power of music. The brainchild of Soul visionary Berry Gordy, drawing inspiration from the car production lines that had defined the city, Motown is right at the roots of dance culture as we know it, the original discotheque music, a fact far too many people seem to be totally unaware of – it didn’t start with House and Techno, it didn’t start with Disco or Funk, it all stems from Motown and ’60s Soul. As I stepped into that building I was totally aware that I was setting foot inside a hallowed space – Hitsville USA no less. 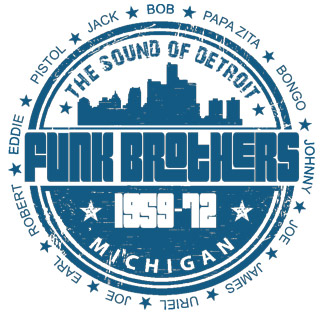 As I’ve spoken / written about on many occasions, I was immersed in this magical music throughout my formative years – it’s right at the foundation of what makes me me. So, to stand beneath the happenstance ‘echo chamber’ in the upstairs room, the very spot where many classic songs I deeply love were sung, and to walk down into ‘The Snake Pit’, where the Funk Brothers made all our dreams come true with music that lifted the hearts of a generation, released all sorts of karmic emotions within me. Strangely, the thing that got to me the most was hearing the opening notes of ‘You Can’t Hurry Love’ by The Supremes, and being instantly transported back to the boy in myself, mesmerized by this and so many other wondrous Tamla Motown singles of the ’60s.

Later, I would kick off my spot with the Reflex Revision of Stevie Wonder’s ‘I Wish’, which (although it was originally recorded in 1976, 4 years after Motown had relocated to Los Angeles) harks back to his own Detroit boyhood. To close I played 2 of Motown’s best-loved recordings, ‘Tears Of A Clown’ by Smokey Robinson & The Miracles and ‘Reach Out (I’ll Be There)’ by the Four Tops – both classics amongst classics. There was a special moment when I was drawn to James Jamerson’s iconic baseline in ‘Reach Out’, which I could hear in my left ear (stereo often split to extremes on ’60s records) – this drew my attention to the street outside, which cut through midtown Detroit, and the awareness that I was there amidst it all, became acute. This was Jamerson’s city, Stevie’s city, Marvin’s city, Diana’s city, Smokey’s city, Gordy’s city and on and on and on. Hallelujah Detroit, praise be to God for your ever-giving gift of music.

The recording from the night is now available to stream / download via SoundCloud:

From Detroit to Philadephia on the Friday, where, by contrast, things were somewhat subdued because of an unexpected freak weather curveball – a tropical storm called Andrea, I believe. However a hardcore of clubbers braved the downfall, 4” of rain in some parts of the city, and made it to the venue, Morgan’s Pier, (which was part in and part outdoors). Although it was a smaller gathering than we’d anticipated, before the heavens opened up that is, what it lacked in numbers it made up for in spirit. So, to the Philly crowd who made it along, I salute your gallant efforts, and look forward to a return in sunnier climes. 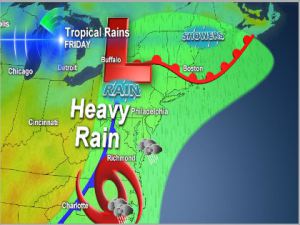 Following on from Motown, students of dance music will know that Philadelphia International Records was the next major dance music label to emerge, laying the blueprint for Disco in the process by, as Fred Wesley (formerly of James Brown’s band, The J.B’s, then later Parliament / Funkadelic) once remarked, elegantly ‘putting the bow tie on the Funk’. The golden era of the Philly Sound spanned the early to mid-’70s, when producers, Gamble & Huff, were at their most prolific, churning out hit after hit by artists including The O’Jays, Harold Melvin & The Bluenotes, Billy Paul, The Intruders, The Jacksons and MFSB, the Soul / Funk orchestra working out of the city’s famous Sigma Sound Studios who were so vital to shaping the sound of Disco (later, most of these musicians would re-locate to New York to form the Salsoul Orchestra – beginning a fresh chapter for dance music).

New York was my final port of call. The massive influence this city has had on me, especially during the early ’80s, is well documented. This is where Disco fermented in the ’70s, growing into a global movement and defining the course of dance culture. Even after it was supposedly killed off at the end of the decade in a racist and homophobic tirade by the Rock establishment, spouting their ‘Disco Sucks’ mantra, it continued to flourish on a more underground level, with classic independent labels like Prelude and West End flying the flag – with the term Disco sullied, people began to refer to it as Dance music instead. A positive result of all this was that, with the mainstream glare now elsewhere, an era of experimentation followed, setting the tone for the oncoming Hip Hop, House and Techno directions, which would dominate dancefloors for the next 30 years. 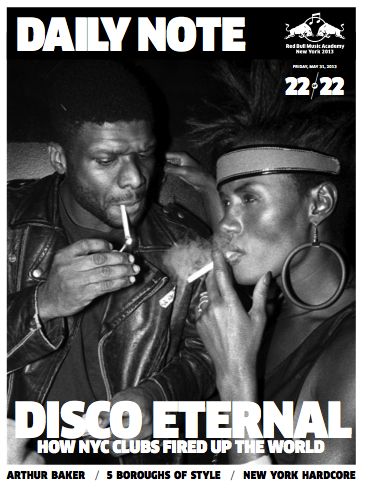 The Red Bull Music Academy, held in New York this year, had only just ended the previous weekend, and the final issue of The Daily Note, the event’s free paper, carried a great article from ‘Love Saves The Day’ author, Tim Lawrence, the front page, adorned with a fabulous shot of DJ Larry Levan with Grace Jones, announced ‘Disco Eternal – How NYC Clubs Fired Up The World’. Tim’s piece, ‘From Disco To Disco – New York’s Global Clubbing Influence’, looks at some of Manhattan’s legendary venues of the ’70s, including The Loft, Paradise Garage, Studio 54 and Danceteria, whilst discussing how the city inspired 2 of the UK’s most celebrated nightspots, The Haçienda in Manchester and London’s Ministry Of Sound. You can read online at: http://www.redbullmusicacademy.com/magazine/from-disco-to-disco
or download a PDF of the publication:
http://www.redbullmusicacademy.com/downloads/dailynotenyc/ISSUE-22.pdf

My NYC gig was a boat party, from 4pm until 10pm on the Hudson, promoted by TBA Brooklyn and Autobrennt, and also featuring ex-pat Mancunian DJ Billy Caldwell (whose magnificent edit of ‘How Soon Is Now’ by The Smiths has been a big tune for me during recent times). Given that New York is only a few hours from Philadelphia, it had also experienced bad weather in the days beforehand, so, even though the forecast had it clearing up on the Saturday, there was still a concern that it might rain on our parade. We needn’t have worried though, not only did the rain hold off, but the sun broke out – it was an ideal day for a boat party, and the event was a major success. 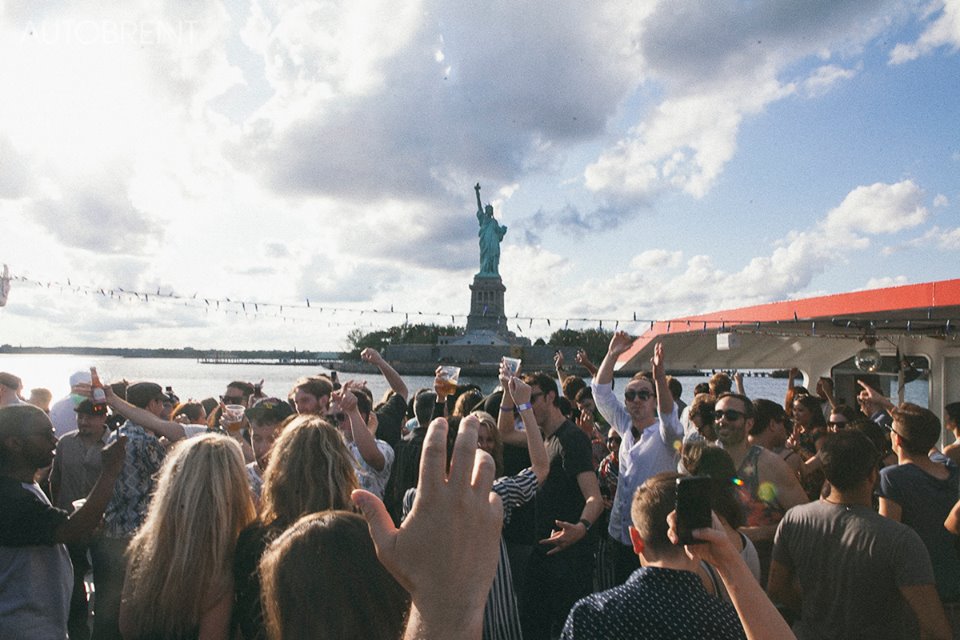 A personal highlight was seeing the Statue Of Liberty for the first time. To view from a boat, as so many people who immigrated to the US originally saw it after it was erected in 1886, was awe-inspiring. A gift from the French, and a symbol of freedom, you can only imagine the emotions it would have conjured up in the hearts of those seeking a new beginning in what was a whole other world. A small group of us broke away from the party to view it from a quiet spot at the front of the boat – the four people with me, all now US citizens, each coming from different European countries (Albania, Serbia, Poland and Turkey), emphasising the cultural melting pot that makes up America. 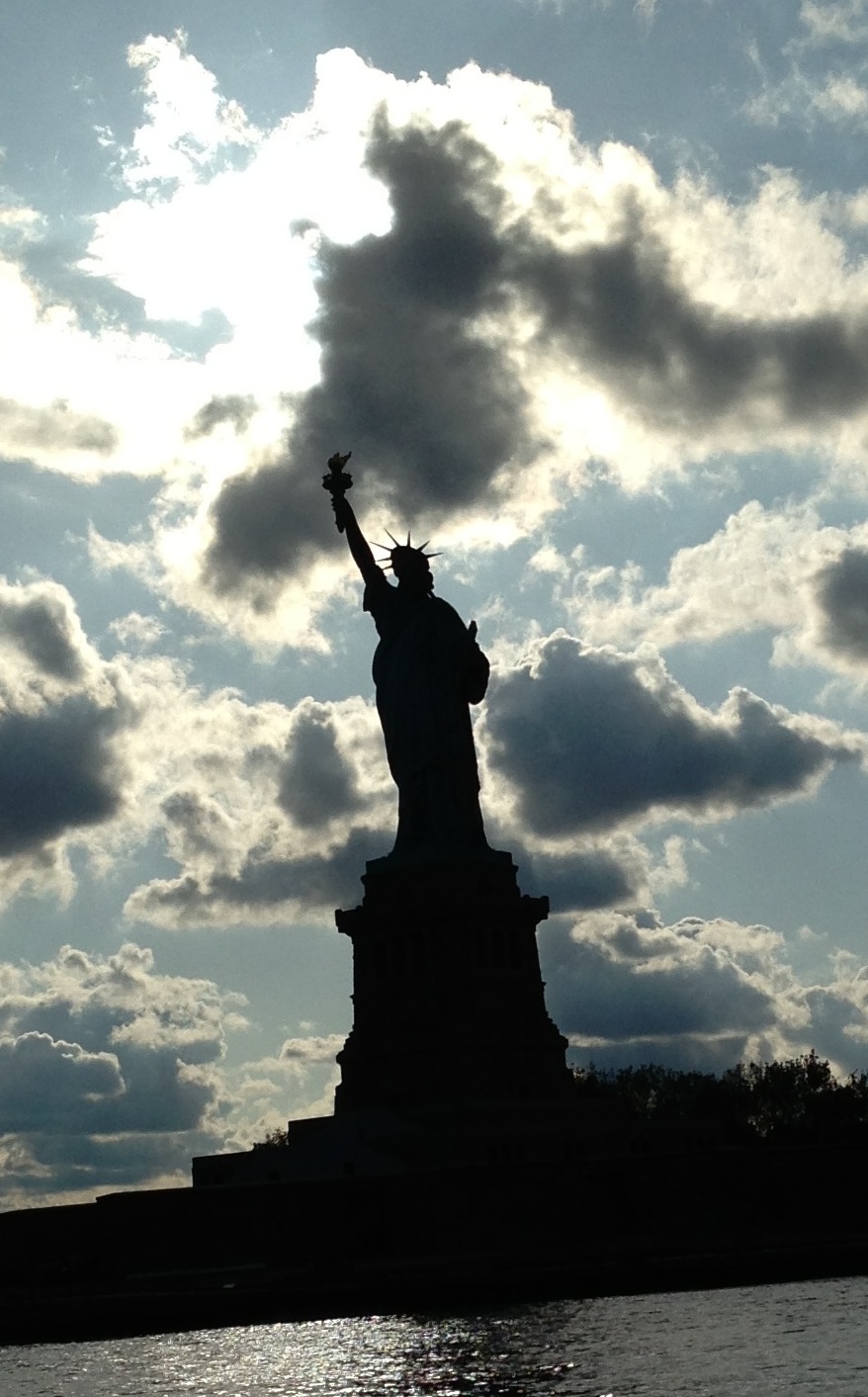