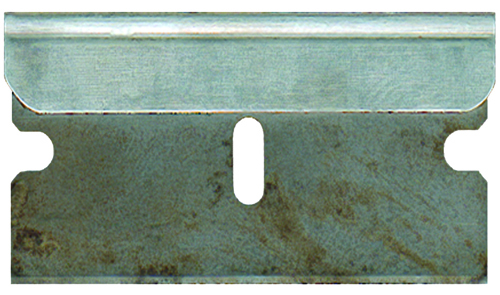 One of the biggest tunes for me during the past 12 months has been the edit I did of Late Nite Tuff Guy’s ‘One Nite In A Disco’. It’s finally been made available as a digital download, having previously been part of a limited vinyl only EP, which, now digitized, is topping Juno’s Disco download chart as I write this:
http://www.junodownload.com/products/1937261-02.htm

Late Night Tuff Guy is Carmelo Bianchetti (aka Cam aka HMC aka LNTG), who, under his HMC (House Master Cam) DJ guise, is revered as one of Australia’s House and Techno pioneers. Dubbed by DJ Magazine as ‘the godfather of the Adelaide scene’, in the ’90s he played dates in Asia and Europe, but an aversion to flying unfortunately put an end to any international aspirations. However, via his Late Nite Tuff Guy edits, he’s now connecting with a new audience of people around the globe, and my bet is that he’s about to blow up in a big way, the quality and consistency of his work currently placing him at the cutting-edge of this ever-growing edits movement.  He’s also somewhat prolific, with 5 releases in less than 12 months, a 6th imminent, and a 7th already lined up! 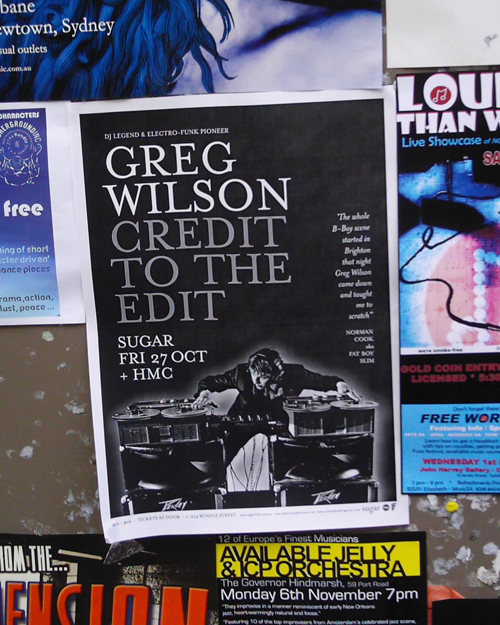 I met Cam / HMC in October ’05, when I played at Sugar, my regular stop in Adelaide, for the first time. Since then I’ve come to realise that DJs all over Australia hold him in high regard, as somebody who blazed a trail back in the day, and continues to do things on his own terms. So it’s really good to see him receive some long overdue recognition outside of his home country.

Anyhow, back to May of last year when Driller, the owner of Sugar, sent me an email telling me he’d set up a record label, Dessert Island Discs, and linking me to the inaugural release. This was the first time I heard ‘One Nite In A Disco’, and it really grabbed my attention in a big way. The intro was mesmerising, with ‘one nite in a disco…in a disco…in a disco…in a disco’ rhythmically repeating over and over. Even though it was moulded from a well-known track, Sister Sledge’s ‘He’s The Greatest Dancer’, it wasn’t obvious – that was until after the 8th measure of vocal, when the next line in the song, ‘on the outskirts of Frisco’, burst in and changed the whole vibe for me, abruptly snapping me out of my disco trance.

I was disappointed to hear this line for two reasons. Firstly, I’ve always felt, as I know many others do, that some of the lyrics in ‘He’s The Greatest Dancer’ are, shall we say, a tad corny – the rhyming of ‘Disco’ and ‘Frisco’ the prime example. For this reason I’ve never played the original version since I started deejaying again – the Rodgers / Edwards groove is, of course, sublime, the Chic Organization really on a roll at the time, but I can’t get past those lyrics. I remember hearing Danny Wang play it in Liverpool back in 2004 and it sounded great, but Danny can get away with stuff like that – it just didn’t sit right for me personally.

However, even more important to me was that the line fixes the song in a definite place, whereas I could see the possibility of an edit that would make the track’s location neutral, so that when people are dancing to it the ‘one nite in a disco’ that the words are referring to isn’t somewhere else (anchored to ‘Frisco’ in this case), but here and now, in whichever disco you happen to be in, regardless of where you are. I wanted to make the track universal, so, when I play it, it speaks to that particular ‘nite’, the one we’re experiencing. So I tailored an edit for my own needs, focusing the track’s hypnotic vibe by removing the offending lyrics (annoying would be a better word – I could never be offended by a Rodgers / Edwards song), whilst extending the groove that had hooked me like an opiate. 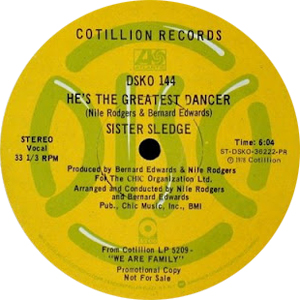 I’d already been playing an edit of ‘He’s The Greatest Dancer’, which also made excellent rhythmic use of part of the same line, repeating ‘a disco’ during the intro and outro. In October 2010 I received an email from Darren Dalton (aka Daz), who’s over in Waterford, Ireland. He linked me to a number of edits, including his take on ‘Greatest Dancer’. I told him that ‘your Sister Sledge is a masterstroke. You’ve got the cheesy lyrical content out, which, to be honest, is probably what stops me from playing it. It was all good and well back in ’79, but it detracts from the wonderful groove – you’ve done a version I can play, and with that great in and out you’ve really nailed it’. Check it out here:
http://soundcloud.com/getdownedits/sister-sledge-greatest-dancer-daz-digs-disco-re-edit-1

The Daz Digs Disco edit of ‘Greatest Dancer’ would become a massive tune for me, and appears in a number of my online mixes. Interestingly I was playing it the following month in Osaka, Japan, when who should come up to me to say hello, but Danny Wang, who unbeknown to me at the time, was appearing at another club in the city later that night. Definitely some karmic forces at work, taking things full circle from when I heard him dig out the original 7 years previous in that Liverpool basement. 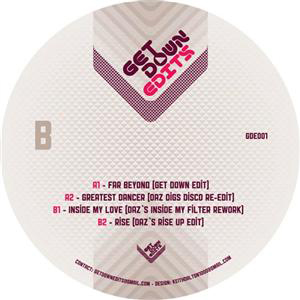 I tipped off a couple of the people I know who release edits, and this resulted in Daz’s edit being issued last July on limited vinyl, along with three of his other reworks, as ‘Get Down Edits Vol 1’. Daz was always very gracious about the support I’d given it, but really it’s a two way street and I’m obviously thankful that he put together something that fitted so well into what I do (which is the case with all DJ’s who thank me for playing their edits, when they’re the ones who are deserving of the real thanks for doing them in the first place).

By the time I received Driller’s email, ‘Greatest Dancer’ was something I’d been playing for a fair while, so it was time to move onto other stuff anyhow, and the edit I’d done of ‘One Nite In A Disco’, which slipped effortlessly into the vacuum (taking up the Sister Sledge baton), would blow up big time for me. Soon I’d inform Driller that ‘this is going to be one of the biggest tracks of the year for me. You should see how the atmosphere in the room lifts when I put it on – there’s a real buzz of anticipation when people realise what it is. The build is awesome – the bit where the sound all of a sudden fattens out is a real moment, takes it up a level and the floor just rides it like a communal mass of groove jockeys.’ 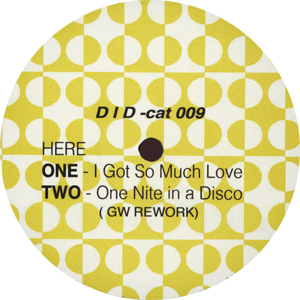 After a bit of confusion as to whether I was offering to let them put out my edit on Dessert Island, or was asking them to get Cam to do something similar, the situation was clarified and now the ‘GW Rework’ is finally out and about in time for the summer ahead, as part of an EP that also includes 2 newer LNTG edits that both feature in my recent mix from the Queen Of Hoxton in London, which only went up on SoundCloud a couple of days ago – these are ‘I Don’t Like Acid’ (10cc’s ‘Dreadlock Holiday’) and ‘You Got Me Groovin’’ (Yarbrough & Peoples ‘Don’t Stop The Music’). Check out the QOH mix here:
http://soundcloud.com/gregwilson/queen-of-hoxton-london-23-03

So finally, here are the 2 versions of ‘One Nite In A Disco’, the first being the original, followed by my rework. I’m sure there are plenty of people who, unlike me, love the cheesy lyrics, and see me as a bit of a killjoy for taking them out, but, by the same token, there are plenty of others who’ll thank me for sparing them the cringe factor. Both versions work in their own context, but, from a personal perspective, it’s a deeper track for the loss of those words – something that gets into your bones, and not on your nerves.

That’s what it is with an edit, you’re coming at it from your own angle – the blade cutting diagonally.

11 Responses to The Anatomy Of An Edit