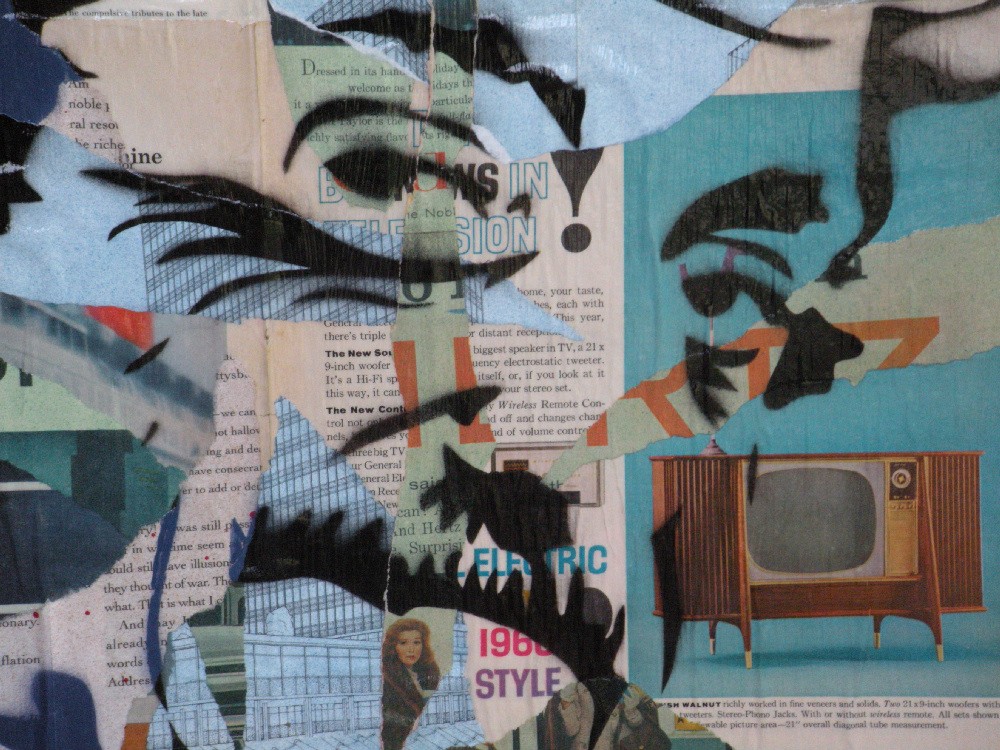 Having made reference to it in the recent ‘Little Big Man’ blog post, I’ve just re-read Kurt Vonnegut’s ‘Slaughterhouse-Five’, a book I’ve returned to every four or five years since I first discovered it back in the ’80s – it’s one of those books I’ll always go back to as it contains some deeper truths, yet presents them in such a fantastically engaging and entertaining manner. Given the writing style, and with the book being just over 150 pages, this is a breeze of a read.

If you haven’t read ‘Slaughterhouse-Five’, but are aware of it by title only, I can guarantee that it’s nothing like you imagine it to be. The fact it centres around the experience of an American POW in the 2nd World War is probably off-putting to many people, some who’d no doubt avoid war (or, in this case, anti-war) books like the plague, but to dismiss it out of hand because of this is to deny yourself the fruits of a wonderful piece of literature.

Whatever your pre-conceptions, let them go, for ‘Slaughterhouse-Five’ is totally unconventional, its anti-hero, Billy Pilgrim, having ‘come unstuck in time’, finding himself at the mercy of fate as he bounces around the various points of his life, many of which place him in ridiculous situations, be it located in Dresden, where he witnesses the devastating firebombing that left the city in ruins during the early part of 1945, or on the planet Tralfamadore, where he’s been abducted by aliens and exhibited in a zoo, at first alone, but later with a mate called Montana Wildhack, an earthling porn star (somewhere between all this he practices optrometry in Ilium). 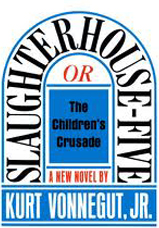 You begin to get a measure of why this book is held in such high regard when you realise that Kurt Vonnegut, before he started out on his career as an author, was an actual POW in World War II who bore witness to how the allies unnecessarily destroyed Dresden, a city with little military value, many would say in retribution for the German blitzing of London and Coventry earlier in the war. When you consider that more people are said to have been killed in Dresden than when the atom bombs were dropped on Hiroshima and Nagasaki, the sheer scale of the slaughter comes into focus – the bodycount has been disputed down the years, but what’s for sure is that what happened, as Vonnegut would say, was “carnage unfathomable”. The title of the book has nothing to do with that though – Vonnegut having been held in an old slaughterhouse, which turned out to be one of the safest places in Dresden when the city was flattened, its address being Schlachtof-funk (Slaughterhouse-five).

Returning to the US after the war, Vonnegut was shocked to discover that the bombing of Dresden had been swept under the political carpet – pretty much nobody in the US had any idea that it had even happened. Vonnegut’s ‘Dresden book’ was always going to be his defining moment, but it took until 1969, when he was already an established author, for him to finally bear witness.

It was typical Vonnegut when he later stated: “The Dresden atrocity, tremendously expensive and meticulously planned, was so meaningless, finally, that only one person on the entire planet got any benefit from it. I am that person. I wrote this book, which earned a lot of money for me and made my reputation, such as it is. One way or another, I got two or three dollars for every person killed. Some business I’m in.”

‘Slaughterhouse-Five’, as the Cliffs Notes for the novel state, combines historical, sociological, psychological, science-fiction and biographical elements, with its key concept concerning predestination. Vonnegut suggests that his novel is ‘schizophrenic’ – having originally intended to write in a more traditional linear way, telling the story with a beginning, a middle and an end, he turned things on their head via his use of the Tralfamadorians, who’d first appeared ten years previously in his 1959 novel ‘The Sirens Of Titan’, in order to unstick time. 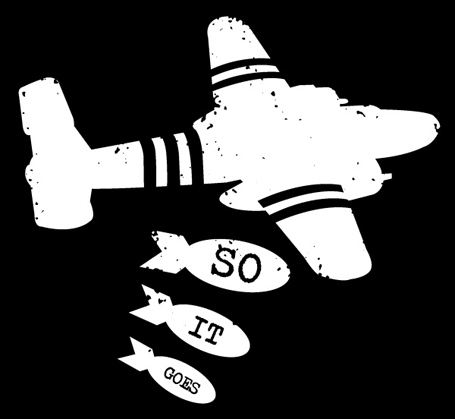 Here’s a classic passage from the book, in which Billy Pilgrim is watching an old war film:

He came slightly unstuck in time, saw the late movie backwards, then forwards again. It was a movie about American bombers in the Second World War and the gallant men who flew them. Seen backwards by Billy, the story went like this :

American planes, full of holes and wounded men and corpses took off backwards from an airfield in England. Over France, a few German fighter planes flew at them backwards, sucked bullets and shell fragments from some of the planes and crewmen. They did the same for wrecked American bombers on the ground, and those planes flew up backwards to join the formation.

The formation flew backwards over a German city that was in flames. The bombers opened their bomb bay doors, exerted a miraculous magnetism which shrunk the fires, gathered them into cylindrical steel containers, and lifted the containers into the bellies of the planes. The containers were stored neatly in racks. The Germans below had miraculous devices of their own, which were long steel tubes. They used them to suck more fragments from the crewmen and planes. But there were still a few wounded Americans, though, and some of the bombers were in bad repair. Over France, though, German fighters came up again, made everything and everybody as good as new.

When the bombers got back to their base, the steel cylinders were taken from the racks and shipped back to the United States of America, where factories were operating night and day, dismantling the cylinders, separating the dangerous contents into minerals. Touchingly, it was mainly women who did this work. The minerals were then shipped to specialists in remote areas. It was their business to put them into the ground, to hide them cleverly, so they would never hurt anybody ever again.

The American fliers turned in their uniforms, became high school kids. And Hitler turned into a baby, Billy Pilgrim supposed. That wasn’t in the movie. Billy was extrapolating. Everybody turned into a baby, and all humanity, without exception, conspired biologically to produce two perfect people named Adam and Eve, he supposed. 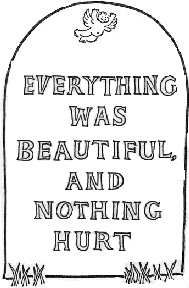