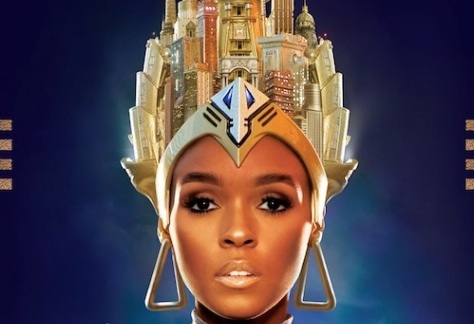 I was listening to Radio 4 on my way back from Bestival last month and there was an interview on their arts programme that really caught my attention. It was with Janelle Monáe, an American recording artist who’s been getting big acclaim for her album ‘The Archandroid’. I was fascinated with the off the wall stuff she had to say – she certainly looks at things from a novel perspective. Apart from being intrigued to hear first-hand what the fuss was all about with her music, which I was informed covered a whole spectrum of styles, I also had an ulterior motive – having learnt that it was a concept album set in a science fiction future, I wondered if there was anything on there that might suit the mix I was about to put together for Beats In Space (see the ‘Hazy Cosmic Jive’ previously posted). So when I got home I ordered myself a copy.

It’s the type of album that will annoy the hell out of some people, whilst others will hail it as a work of genius – when someone states that ‘I can’t decide if it’s a masterpiece or a total mess’ you know you’re in for an aural experience decidedly different to the norm, which this album most certainly delivers.

I say all power to her – hats off to anyone out there breaking the mould, and Janelle Monáe is definitely doing that with bells on. It’s an album that might need a good few plays before it properly clicks with you, but ‘The Archandroid’ is well worth the perseverance, and offers a welcome beacon of light in this era of quick fix throwaway pap.

I enjoyed this review by Anthony Fantano from theneedledrop.com:
http://www.youtube.com/watch?v=3niVOWuSVF4

Check out a few of her tracks on YouTube: