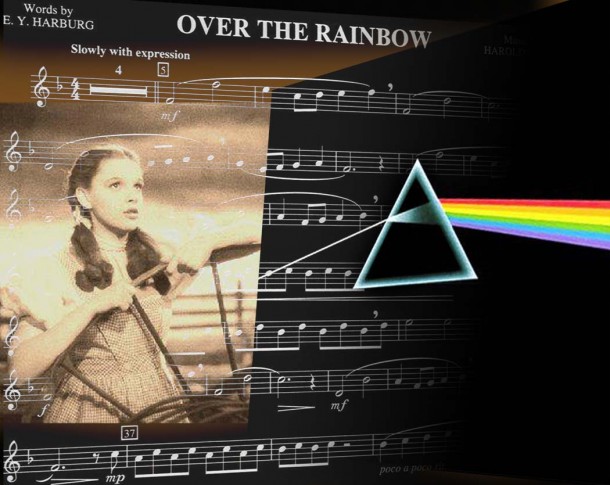 Synchronicity – a phenomenon in which coincidental events seem related but are not explained by conventional mechanisms of causality (Carl Jung).

In the lead up to the last Living To Music session a couple of people mentioned this in the comments, but I asked them if they’d mind me removing as I didn’t want it to distract people who were going to participate. I certainly didn’t want them trying this during the session, as this would completely defeat the object, by introducing such an evocative visual association into what is supposed to be a listening experience. Apologies to them for that – thanks for understanding.

I decided that, after we’d got the session out of the way, I’d sit down and give it a whirl – see what all the fuss was about. It’s a fascinating coupling regardless of whether or not anything syncs in a literal sense. Besides, I felt it would make a good blog post.

I found some examples on YouTube, but wasn’t very impressed  to start with – there isn’t a great deal of visual stimulus in the opening part of the film as the characters are introduced, and, of course, it’s shot in black and white, which only emphasises the starkness and lack of coherence with the music. However, there is a definite moment of synchronization as Dorothy walks along the edge of the fence in the pig pen as the words ‘balanced on the biggest wave, race towards an early grave’ are sung – at which point she falls and ‘On The Run’ begins. 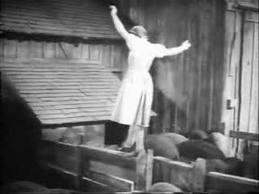 Alas, it was a false dawn and the momentum was lost no sooner had it been found. I pondered that, having picked up the pace, ‘On The Run’ would have been more suited to the part a bit later in the film, when the tornado hits and the house spins into the sky (weirdly I’m having deja vu as I type this). But hang on a minute, here’s the introduction of Miss Gulch (aka The Wicked Witch Of The West) on her bicycle during the intro of ‘Time’ (her arrival ringing the alarm bells) – I could almost hear a suitably stoned chorus of ‘far out man, syn-chro-nicity’.

The tornado actually coincides with ‘The Great Gig In The Sky’, and makes for a pretty impressive sequence, fusing Clare Torry’s awesome vocal with the atmospheric  footage and special effects, the combination of voice and visual epic in scale – there’s something very beautiful about the juxtaposition, it’s a magical fit (I instantly revised my previously jumped to conclusion that this part of the movie would be perfectly suited to ‘On The Run’). Furthermore as the track ends, concluding Side One, Dorothy opens the door to reveal that wondrous moment when a technicolor Munchkinland metamorphosizes from a monochromatic Kansas, right on cue for Side Two to kick in with ‘Money’. For this section alone I applaud whoever was at the root of this intriguing marriage of music and movie.

There must have been some slight speed manipulation in the clip for things to fall so perfectly. I tried it myself with CD and DVD, and was somewhat frustrated to find that the film footage is a good few seconds slower, with the door opening on the last note of ‘Great Gig’ rather than after it in the silence between the two sides. The synchronization would have first been done with VHS, and possibly vinyl, so that might account for the time difference.

Having realised that my timings were out, I didn’t look too closely for Side Two’s serendipity, but just enjoyed the feast of aural innovation and iconic imagery that these two great works served up, although I should make special mention of the scarecrow dance as the words ‘the lunatic is on the grass’ is repeated, and we see the Wicked Witch on the grass hid behind a tree.

There are no doubt many different connections for different people, depending on what you read into it on a personal level, reflecting  your existing relationship to the visuals, the music, the lyrics, and how they combine. There’s also plenty of opportunity for the abstract to emerge – it’s a bit like the ‘Paul Is Dead’ urban legend, the more you look (and listen), the more you’ll find. 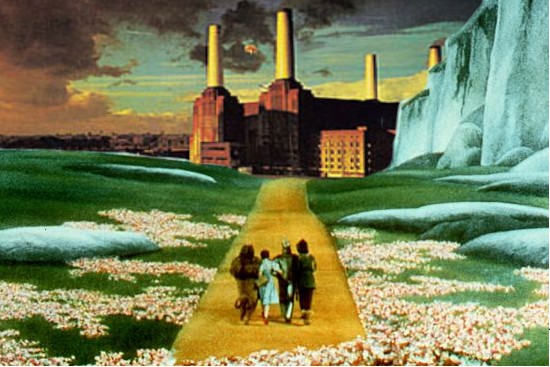 Dark Side Of The Rainbow Wikipedia:
http://en.wikipedia.org/wiki/Dark_Side_of_the_Rainbow

The Dark Side Of The Moon Wikipedia:
http://en.wikipedia.org/wiki/The_Dark_Side_of_the_Moon

4 Responses to When Dorothy Met Floyd