By Greg Wilson on September 6, 2010 in Black Culture, Hear, Misc, See, The Seventies

Soul is not something you acquire, it’s something you either have or you don’t, and sometimes you can find it in the most unlikely people.

It’s over a decade now since I was first introduced to the truly extraordinary talent that is Super Bad Brad, via Dermot Doran, whose father,  Eamon Doran, founded the famous pubs  in Dublin and NYC, which bear his name.  Dermot  had run off some VHS copies of Brad, who he’d got to know over in the US, singing ‘Ben’ and ‘You’ll Never Find Another Love Like Mine’, in order to amaze and entertain his friends. One of these tapes becoming essential viewing in our household, and something we’ve shared with numerous appreciative visitors down the years.

Given that I rarely play anything off VHS these days, and I’ve not had the time to transfer my old tapes to DVD, I haven’t watched this for a good while. However, my son was telling me about a busker he’d seen when he was in Dublin with my wife last week (it was my wife who had got to know Dermot back in the ’90s through a mutual friend and inspiration, no longer with us, Charlie Comer), and this prompted me to dig out the Super Bad Brad tape to show him. There’s another tape somewhere, of Brad in Dublin in 2000, but I couldn’t lay my hands on it, so I went online to see if it was there (it wasn’t). However, I found some great clips, a couple of which I hadn’t seen before, and thought they needed to be shared here.

I remember Dermot telling us that when Brad first came over to Dublin he took him to The Kitchen, the club owned by U2. Bono was there that night and Dermot introduced him to Brad. Apparently Brad said to Bono ‘what do you do, man’, and Bono said ‘I’m a singer’, to which Brad replied ‘yeah, me too’. Super Bad Brad would tour in Ireland with the Fun Lovin’ Criminals.

It’s great to know that Brad is still out there on the streets astounding all and sundry, wherever he pops up.  One-offs like Super Bad Brad make the world a better place. Respect to this unlikely Soul Brother. 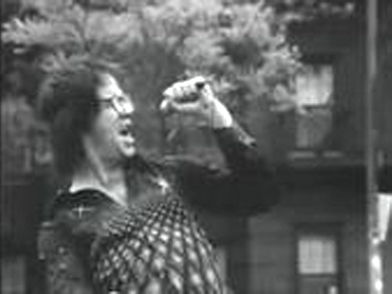 I liked the reply to this suggestion left in the comments beneath one of the YouTube clips:

“absolutely better than most well known singers anywhere. It takes a person with a hell of a strong voice to sing that lovely using only a cheap mic and a boombox. Simon Cowell needs to hear you. Then again you may be happy doing what your doing. Either way you’ve got the talent my friend!! I hope to meet you some day.” – MrInsultking

“man, Simon Cowell doesnt deserve to stand in the vicinity of Brad.” – Kaptenmax

The Punk & The Prankster
When Dorothy Met Floyd