By Greg Wilson on January 28, 2020 in Manchester, The Eighties, The Nineties 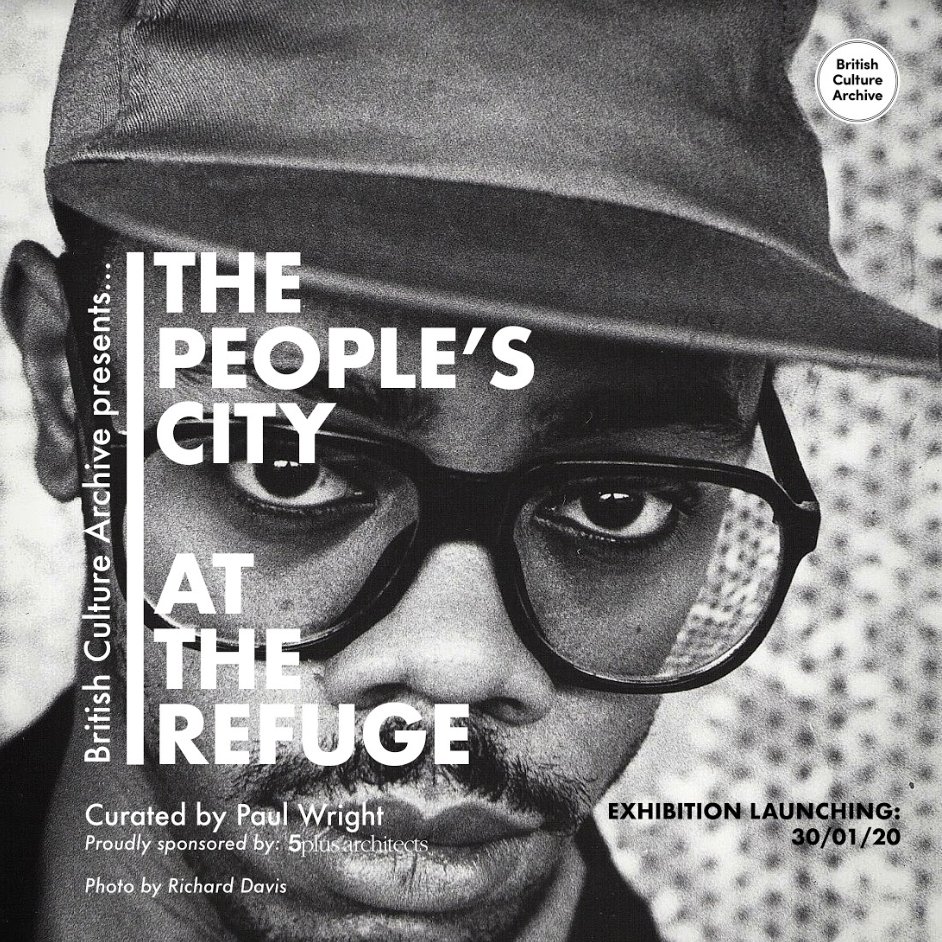 Launching in Manchester on Thursday (January 30th), the British Culture Archive present a photographic exhibition, ‘The People’s City’, in conjunction with the host venue, The Refuge on Oxford Street, highlighting the work of Peter Walsh, Rob Bremner and Richard Davis, and curated by Paul Wright. This follows on from their debut exhibition late last year at The Social in London.

Peter Walsh was photographer for Manchester’s City Life Magazine and documented the Acid House explosion and its aftermath in the late-‘80s / early-‘90s, whilst his camera also captured the bands and fashions that defined the city during its Madchester heights.

Rob Bremner is a Scot who, I’ve only recently learned, came to my hometown to study at the Wallasey School Of Art in the ‘80s. One of his teachers was Tom Wood, known for the 1989 book ‘Looking For Love’, a candid collection of photos taken at New Brighton’s Chelsea Reach, the venue where I’d kicked off my DJ career a decade before. Martin Parr was also in Wallasey, his seminal colour shots from New Brighton perfectly capturing a seaside town in decline, published as a book called ‘The Last Resort’ in 1986. Wood and Parr had a massive influence on Bremner, who adopted a similar documentative approach to his work around Merseyside during the late-‘80s, the Liverpool Echo recently acclaiming him as ‘the photographer who captured the true heart of ‘80s Liverpool’.

Richard Davis’s shots are centred around day to day life in Manchester’s infamous Hulme Crescents during the late-80s / early ‘90s, where he then lived, and as with the other contributors, perfectly illustrates the remit of the British Culture Archive to compile The People’s Archive, documenting images of everyday life, working class society and culture in the UK from days gone by. 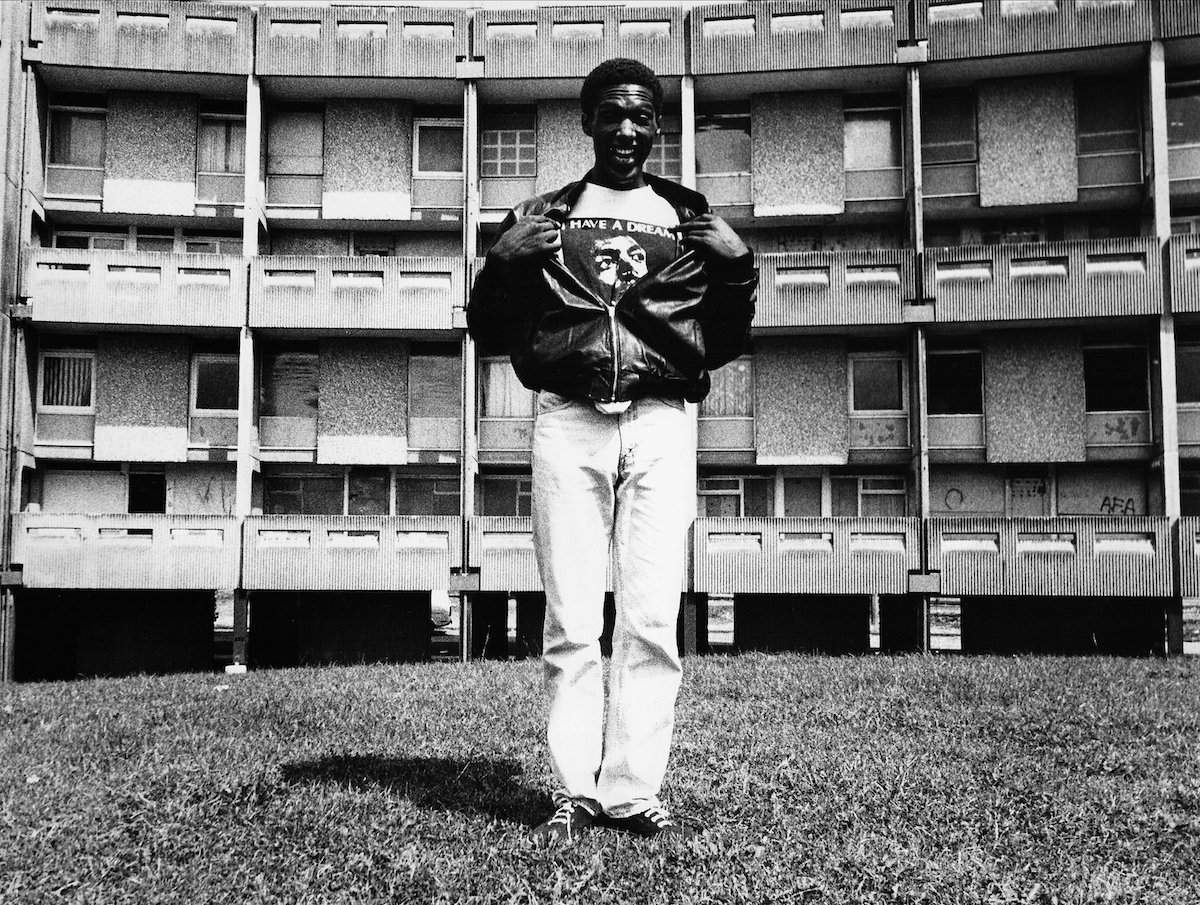 The lead image, one of those used to promote the exhibition, is of rapper Anderson ‘Dangerous’ Hinds during his time as a Ruthless Rap Assassin, taken by Richard Davis, as was the shot above, of Lemn Sissay, then a young poet in his early-‘20s, nowadays an acclaimed author and broadcaster.

I spent a lot of time in Hulme during that exact timeframe, which were the years when I managed and produced the Rap Assassins. Two of the crew, Anderson and Kermit, had flats on Hawksmoor Close, which was connected by a bridge to Charles Barry Crescent, with Kermit’s sister Christine (Kiss of Kiss AMC) also based there. I remember that, despite its notoriety, it felt a bit like an urban Butlins, especially when the sun shone, with all these interesting characters living there, including an array of artists scattered throughout its ‘chalets’.

That said, it very much held its dangers, as anywhere you might describe as edgy will – there were wolves in the shadows more than willing to take advantage of anyone who might have wandered off the beaten path. I remember the dodgy pub as you entered the estate, he Spinners – it was really The Spinners, but the missing T was never replaced in all the time I spent in Hulme, Then, on the opposite side of the Crescents who could forget the unnerving sight of the not so friendly Dobermans wandering freely on the flat roof of the Henry Royce Pub, menacingly growling and barking at people on their eye-level, mainly kids on the wind up, safely secured on the top decks of the passing busses.

Then, of course, there was The Russell (later the PSV), on Royce Street, where Factory launched their nights in the late-‘70s, prior to the acquisition of The Haçienda, with live performances by bands including The Human League, Echo & The Bunnymen, Teardrop Explodes, OMD, Simple Minds, The Cure, PIL, The Pretenders, The Fall and, of course, Joy Division. Perhaps the most celebrated photo session taken in Hulme was Kevin Cummins’ shots of Factory nobility Pete Saville, Tony Wilson and Alan Erasmus outside of The Russell in 1979. 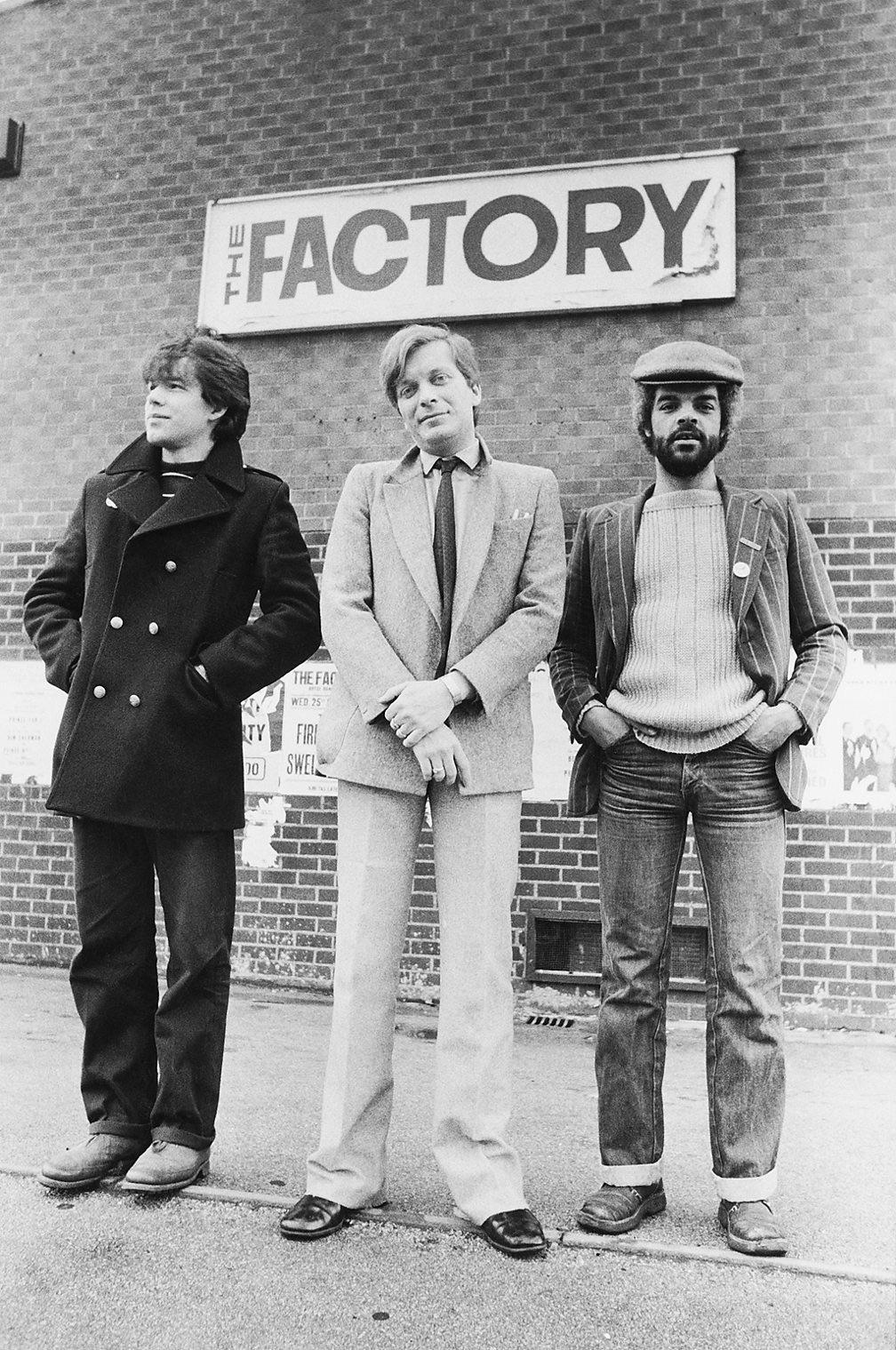 Two years after the Crescents had been occupied by families who’d been sold a better future, the Manchester City Council embarrassingly declared that, due to design flaws, the environment was unsuitable for families, the accommodation now deemed adult-only. This led to the development of what might be described as an alternative society, where the influx of students and artists had resulted in a multicultural melting pot, Hulme becoming a hotbed of ideas and creative cross-pollination, something I’ve previously referred to as the black / white mix, which provided the fertile soil from which dance and alternative music would embrace in the city during the late-‘80s, resulting in new hybrid recordings from the likes of Happy Mondays, A Guy Called Gerald, The Stone Roses, 808 State and, albeit, without the commercial success of these other Manchester innovators, the Rap Assassins, who would embody the spirit of this community via their ‘North Hulme Sound’.

The North Hulme Sound came about with a tongue-in-cheek tip of the hat to Boogie Down Productions, KRS-One chanting his ‘South Bronx’ affiliation on their 1987 track. The Assassins responded with their own ‘North Hulme’ declaration and this was picked up by the press as a description of their unique approach to Hip Hop, which would eventually find plaudits with their debut ‘Killer Album’, released 30 years ago this year, then heralded as the first authentic British Hip Hop offering. 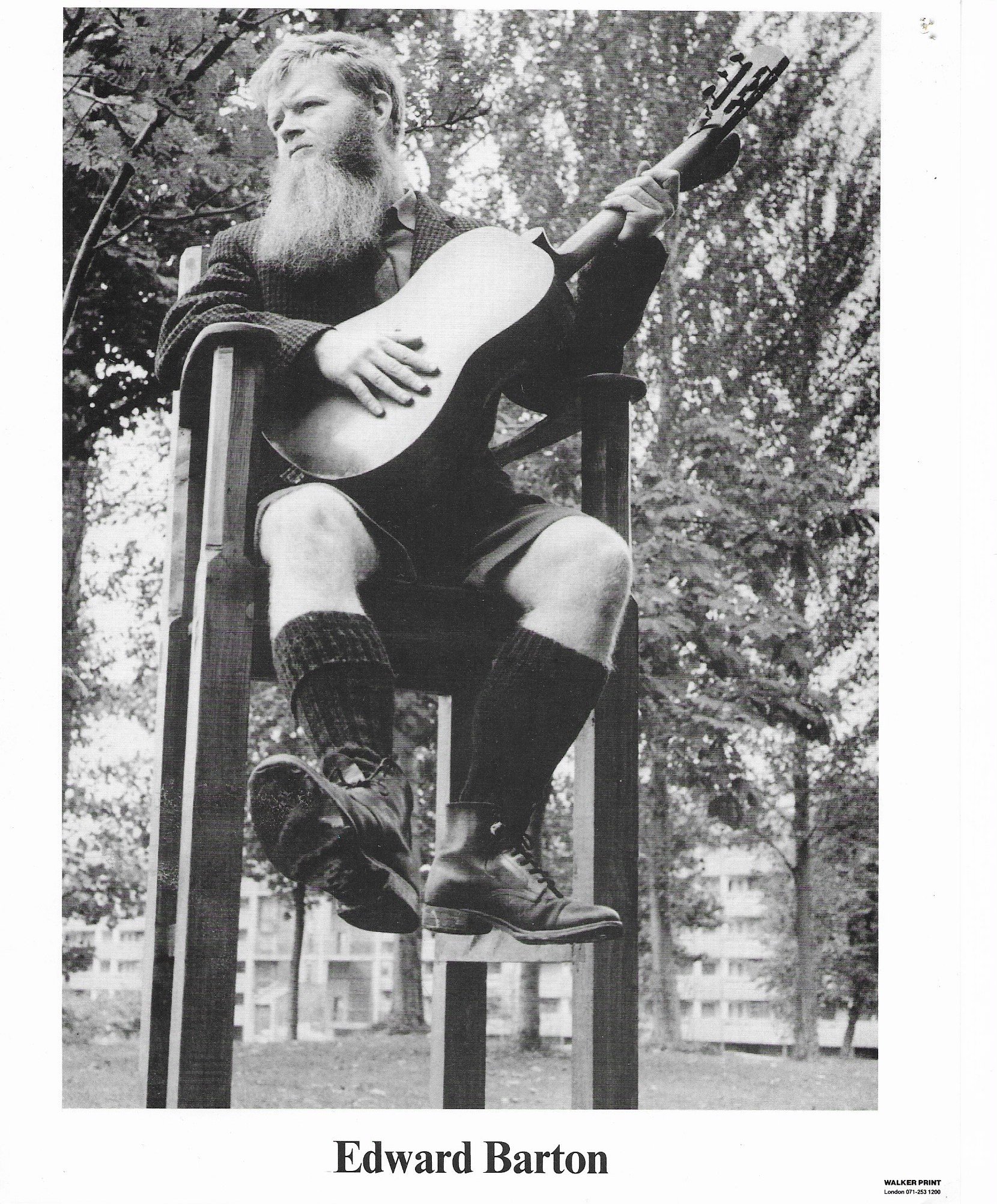 Then there was, of course, artist Edward Barton, perhaps the uncrowned king of the Crescents He was the terror of The Tube whose manic rendition of ‘I’ve Got No Chicken But I’ve Got Five Wooden Chairs’ had traumatised the Friday evening TV audience in 1985. Who’d have thought that it was the same guy who’d written a gentle childlike poem inspired by Hulme and its Crescents called ‘It’s A Fine Day’, and then produced an acapella recording in 1983 by singer Jane – the release on the Cherry Red label a top 5 indie hit. Then, in 1992, some bright sparks called Opus III added a groove and created a club hit that quickly went mainstream, the song reaching #5 on the UK pop chart, whilst topping the US Dance chart. By way of serendipity, it enabled him to buy his own house when the Crescents were demolished in the early-‘90s, Edward one of the last residents to leave.

Edward and his brother had taken flats next to each other, knocking the wall between them down so they had access to each-others living space. This illicit DIY renovation would be taken up by The Kitchen in Charles Barry, which having initially been set up as a studio, knocked down a couple of walls to become a key after-hours haunt during the Rave era.

Edward collected pieces of wood, and all sorts of found items he’d pick up around the Crescents, not least discarded children’s dummies, which he hung from suitable branches he’d foraged. The promo shot he had around the time, resplendently bearded on his wooden highchair, surveying his Crescent domain, is my favourite shot of him. He infamously had a birthday cake, which he’d left uneaten and rotting in his home, a photo of which adorns his ‘Edward Not Edward’ album from 1989, a compilation of his songs performed by various Manchester artists, including 808 State, A Guy Called Gerald, Inspiral Carpets, Chapter & The Verse, Kiss AMC and the Rap Assassins. Later, on the 1991 Assassins track ‘Hard And Direct’, which documents the origins of the crew and others on the fledgling Manchester rap scene, they’d give a special shout out to Edward and his birthday cake. 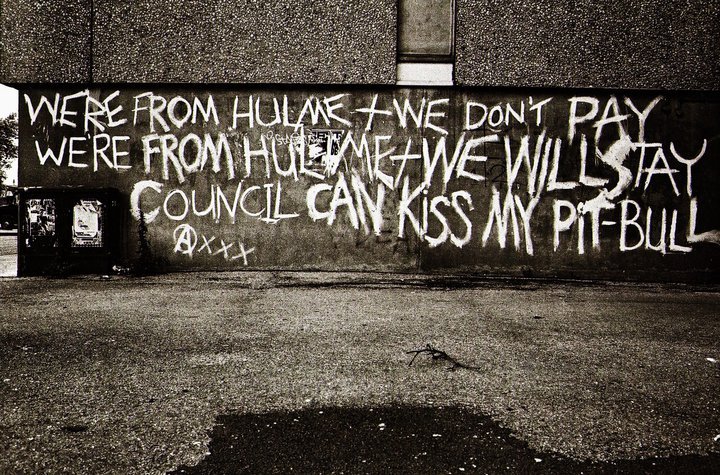 As an experiment in social housing (it was the largest public housing development in Europe), Hulme had been a colossal failure, but it was, as a consequence, a hugely successful cultural hub and sadly lamented by many when the Crescents were bulldozed in the early-‘90s, just a couple of decades after they’d been built.

The launch party of The People’s City at The Refuge from 5pm on Thursday is in conjunction with Proper Magazine, and the party will feature guest DJs including Dr D bringing a bag of Reno Soul & Boogie on the night, Paul Wright himself, Neil Summers, founder of Proper Magazine, Luke Unabomber, Glenn Kitson (filmmaker), Abigail Ward (co-founder of Manchester Digital Music Archive). The British Culture Archive is currently running a crowdfunding campaign to help create a full online archive and a permanent gallery space in Manchester. For more information: https://www.crowdfunder.co.uk/thepeoplesarchive

4 Responses to The People’s City Exhibition