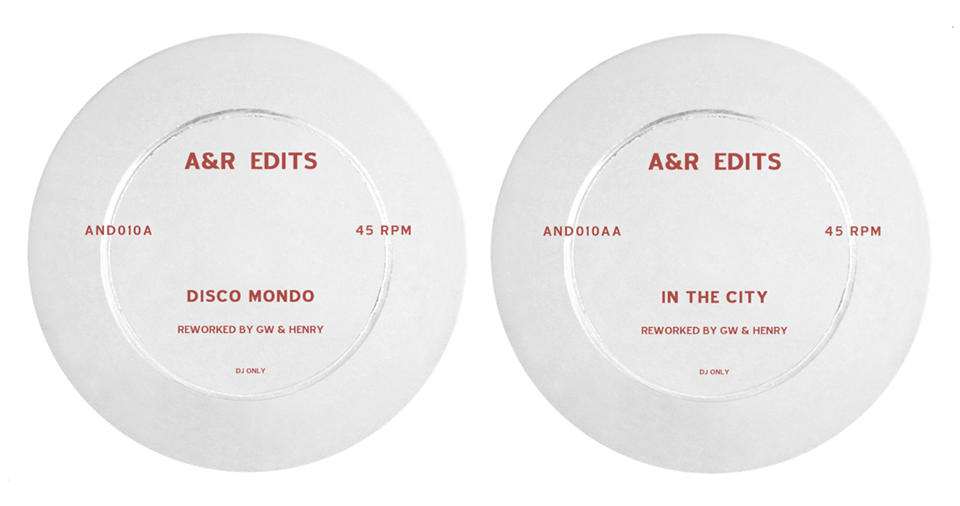 The limited-edition A&R Edits label returns to vinyl after a 4 year gap, the last and 9th release in the series appearing back in 2015 – previous edits courtesy of Henry Greenwood, Derek Kaye, Sophie Lloyd, F.A.M.E, Fingerman, Peza and Twisted Soul Collective. The new release, a collaboration between Henry and myself, couples ‘Disco Mondo’ with ‘In The City’, and is available to purchase here via Juno:
https://www.juno.co.uk/products/gw-henry-disco-mondo/739367-01/

These are both tracks that I’ve been playing over the past year or so, and which I’ve been asked on many occasions whether vinyl copies will be made available. The re-launch of A&R seemed the ideal way of going about this, and we now have a few further releases lined-up for the coming months.

‘Disco Mondo’ reworks ‘Mondo Disco’, which was recorded by the Los Angeles based songwriting and production team Laurin Rinder & W. Michael Lewis, who forged a distinctive Disco sound during the mid-late 70’s, drawing from their background as Rock and Soul session musicians, whilst playing all the instruments themselves, El Coco and Le Pamplemousse being their initial projects. They’d later record a series of albums under their own names, Rinder & Lewis, including the grandiose Disco concept album, ‘Seven Deadly Sins’. The smooth grooving and somewhat esoteric ‘Mondo Disco’ is one of their early tracks released under the El Coco moniker in 1976.

This is pressed back to back with ‘In The City’, recorded in 1978 as ‘Dancing In The City’ by Marshall Hain, a brooding Balearic treasure by a group who experienced a fleeting moment of fame with this Pop / Rock treat and its addictive downtempo dance beat. It’s these qualities we’ve tried to enhance, making the track more contemporary for DJs to play out now, whilst retaining the distinctive essence of the original. First released on EMI’s progressive label, Harvest, it was a huge UK hit, reaching #3 on the singles chart, as well as scoring big in Europe, Australia and South Africa, and just missing out on the US top 40. The duo behind the track, keyboardist Julian Marshall and vocalist/bassist Kit Hain had met as pupils at Dartington Hall School in Totnes, Devon, just a few years beforehand, but their success would be short-lived. A follow-up, ‘Coming Home’, was less memorable, just about scraping into the top 40 before, as with the band itself, completely vanishing from the pop realm, indifference to their album, ‘Free Ride’, the final nail in the coffin.

Marshall would become a member of The Flying Lizards, whose oddball post-punk/avant-garde cover of the R&B classic, ‘Money (That’s What I Want)’, released on Virgin, went top 5 in 1979, before forming Eye To Eye, who released 2 albums for Warner Bros. in the early-‘80s. Hain pursued a solo career, recording the albums ‘Spirits Walking Out’ for Deram (1981) and ‘School For Spies’ for Mercury (1983), before subsequently moving to the US and turning her attention to songwriting.

An A&R Edits playlist is now available at SoundCloud featuring all the reworks released in the series. Stream below: