By Greg Wilson on June 6, 2018 in Black Culture, The Sixties 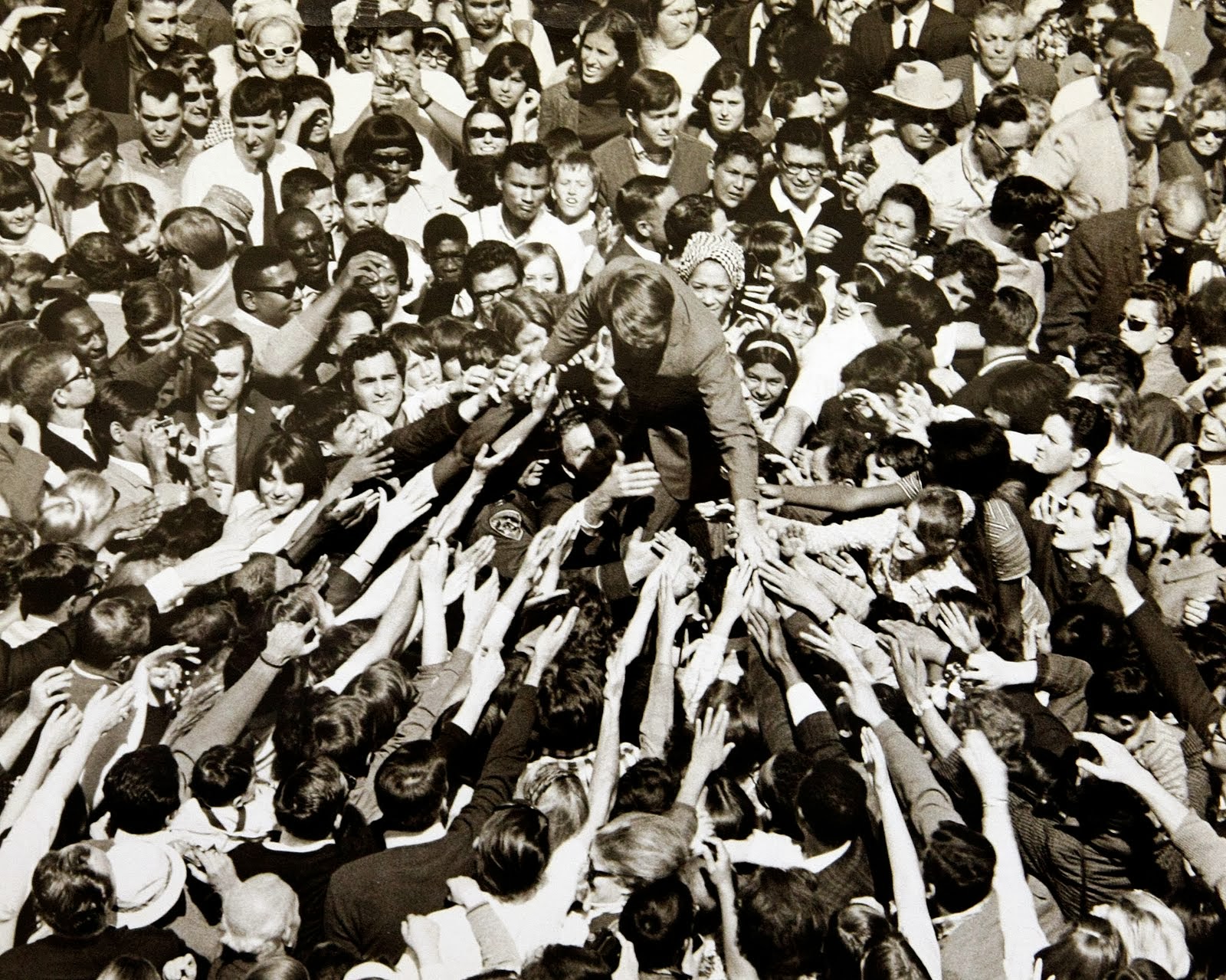 The recent Childish Gambino video to ‘This Is America’ provided a genuine cultural moment, reminding us of the long-standing tradition of the protest song, and how well-chosen words (combined with imagery in this case) can pierce us on a deeper level.

Protest and music go a long way back, perhaps the greatest of all protest songs was Billie Holiday’s recording of Lewis Allan’s anti-lynching poem, ‘Strange Fruit’, which, 60 years later, in 1999, was named as Time Magazine’s ‘song of the century’. You can still feel the weight of that song watching old footage of Holiday performing it – its impact at the time was enormous, saying more in the few minutes she took to sing it than someone could put into the many pages of a thick book.

The ‘60s saw the protest song enter the mainstream via records including Bob Dylan’s ‘Blowin’ In The Wind’ and ‘The Times They Are A-Changin’’, Sam Cooke’s ‘A Change Is Gonna Come’, Buffalo Springfield’s ‘For What It’s Worth’, James Brown’s ‘Say It Loud – I’m Black And I’m Proud’ and the Plastic Ono Band’s ‘Give Peace A Chance’. 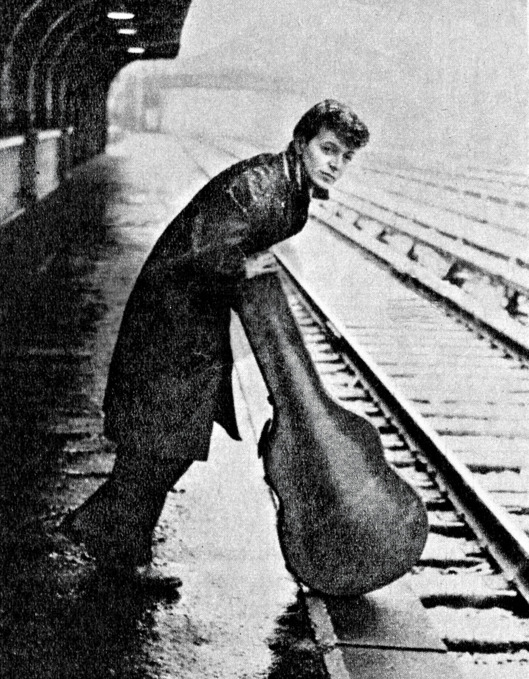 Bronx-born Dion (Dion DiMucci), had scored a run of hits between 1958 and 1963, both with his group The Belmonts, and later solo, most notably ‘Teenager In Love’ (1959), ‘Runaround Sue’ and ‘The Wanderer’ (both 1961). Success had dried up and Dion had struggled with heroin addiction, but in 1968 he was to have one final unlikely chart swansong, the track he recorded, courtesy of Indianapolis songwriter Dick Holler, was a huge departure from his previous post-Rock & Roll style, taking the singer into Folk-Rock territory. 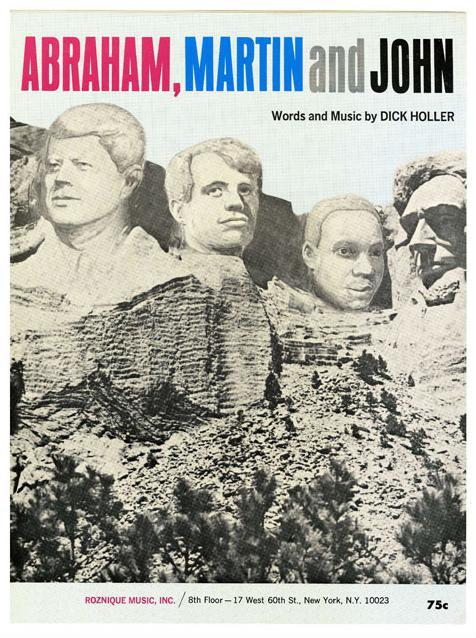 This was ‘Abraham, Martin And John’, the title referring to Abraham Lincoln, Martin Luther King and John F. Kennedy, all of whom met the assassins’ bullet, all of whom are named individually in their own verses. It’s a simple but poignant lyric, each of these verses having the same words, with only the names changing each time around:

“Has anybody here,
Seen my old friend Abraham, (Martin / John)
Can you tell me, where he’s gone.
He freed a lot of people,
But it seems the good die young
I just looked around,
And he was gone.”

However, the inspiration behind the song was the assassination of Robert F. Kennedy that year, Holler had written in it the hours after he’d been shot, the fourth and final verse asking ‘has anybody here seen my old friend Bobby’, only this time the verse, and the song, ends with the words ‘I thought I saw him walkin’ up over the hill with Abraham, Martin and John.’ 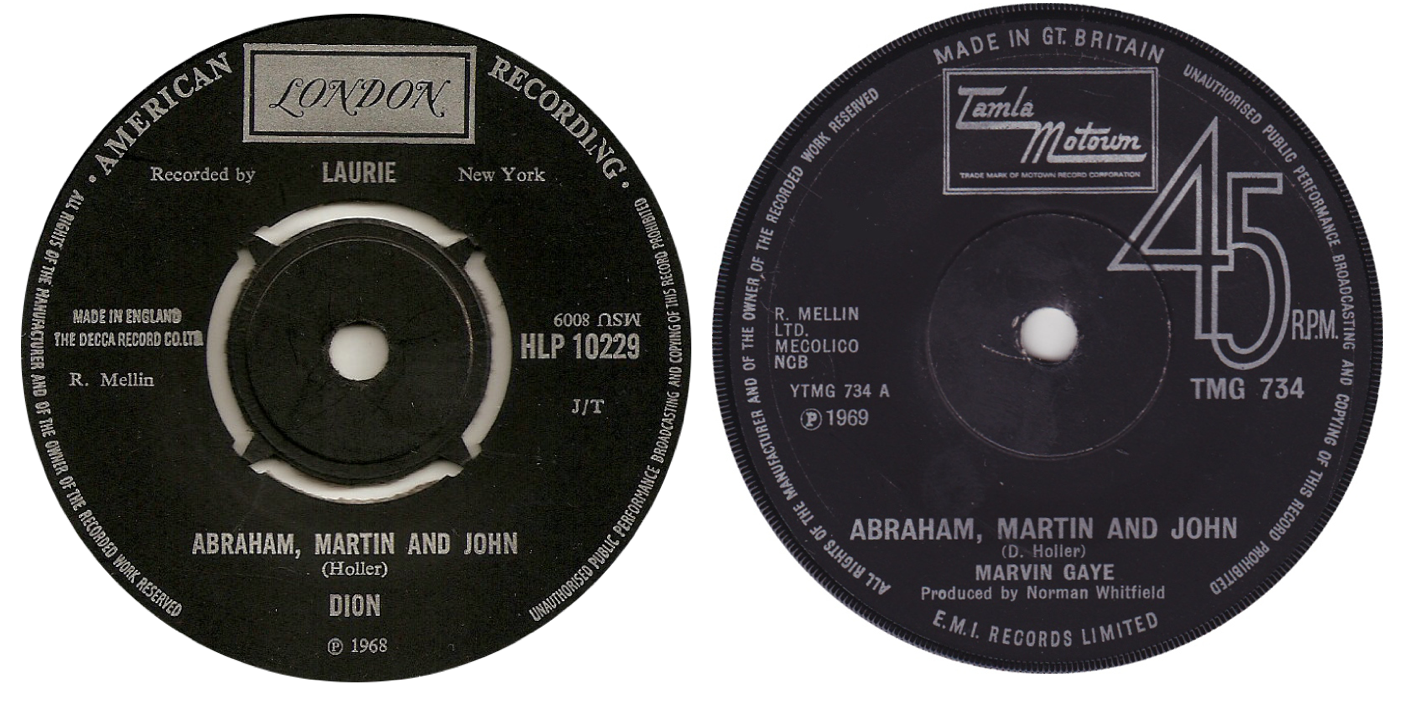 This record made it all the way to #4 on the US chart, part of the American soundtrack in the winter months of ’68. It’s gentle tribute to these giant figures who died for their beliefs, offering some type of reassurance of a greater good, their lives not in vain due to the difference they made. The final ‘walkin’ up the hill’ line leaving a reassuring image of these 4 tragic figures offering each other support in an afterworld, their mortal deeds towering back over us. In many respects it’s a prayer that protests the violent waste of lives that did so much to change the lives of others.

Despite its US success the track passed unnoticed on its UK release via the London label. So, when I heard the Marvin Gaye cover on Tamla Motown in 1970, which was only available as an album track in the US, I assumed that this was the original recording. 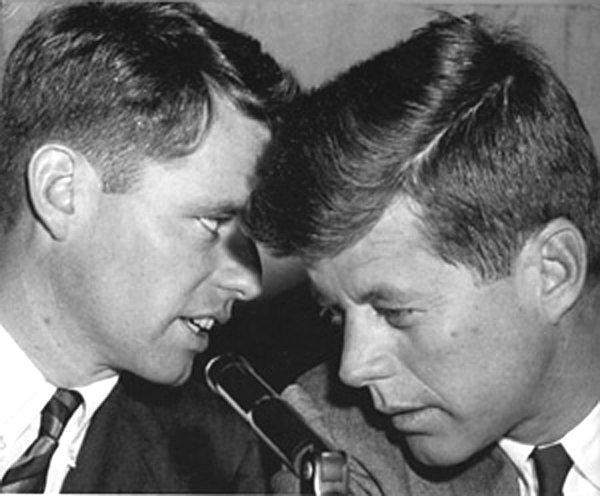 50 years ago today Robert Kennedy (aka Bobby Kennedy / RFK), brother of John F. Kennedy (JFK), and attorney general and power behind the throne during his sibling’s ill-fated presidency, was himself assassinated in Los Angeles having scored a major victory when he won the California primary shortly before midnight on June 5th 1968, setting up a head-to-head for the Democratic nomination with Hubert Humphrey. He would be slain taking a short cut to the press room via the kitchen of the Ambassador Hotel, his assailant quickly named as 24 year-old Palestinian, Sirhan Sirhan, who is still alive today, incarcerated in San Diego, California.

Everyone has heard about JFK and his shooting in Dallas on November 22nd 1963 – the conspiracy theories still running rampant all these years on. Yet Bobby’s slaying, quickly brushed under the legal carpet as an open and shut case, has become something of an historical footnote, rather than the definitive event it was, full of its own conspiracies. It’s clear that had RFK won the presidency over Richard Nixon the world would have been a very different place – instead Humphrey took on Nixon and lost, resulting in one of the most divisive presidencies in US history, concluding with Nixon resigning in shame in 1974, during his 2nd term, following the Watergate scandal. 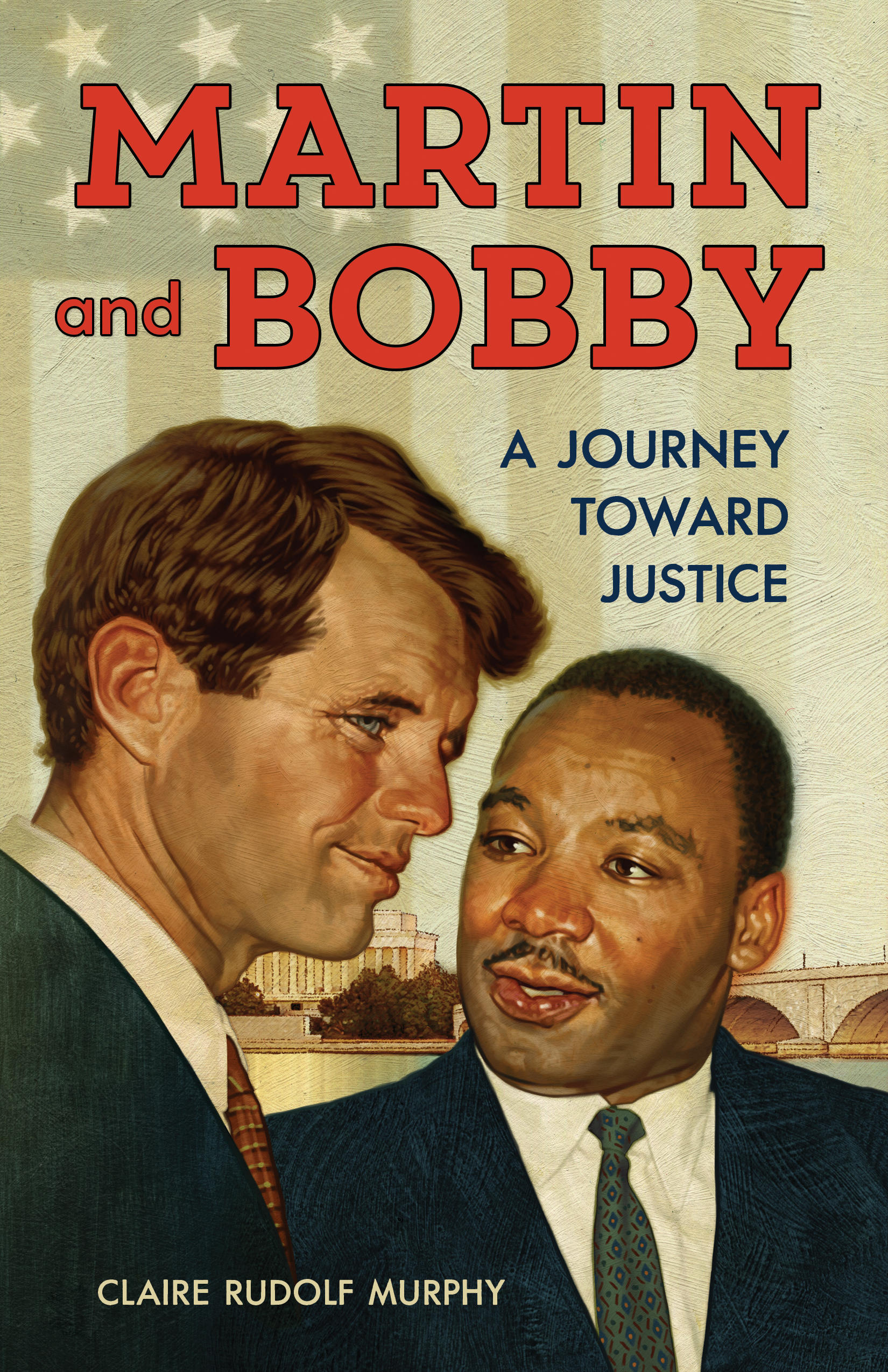 What fascinates me so greatly with Bobby Kennedy is that this was a man who, from questionable political beginnings, experienced a deep personal epiphany, a process that had begun during JFK’s early-‘60s presidency when the civil rights movement was making urgent demands for equality in a country where apartheid was still a daily reality for a great many people of colour, but accelerated to its completion with the tragic death of his brother, one of the most shocking events of the 20th Century.

He came to champion the causes of the poor and downtrodden, whether they be black, Hispanic or white, visiting areas of deprivation and lending a powerful voice to their issues. The footage of him mobbed on the streets by huge crowds of supporters when campaigning is testament to his popularity with people of all colours. He was the symbol of hope to so many Americans during a particularly turbulent time in their history.

His assassination, just 2 months after Martin Luther King had been shot dead in Memphis, was almost too much for a great many people to bear. It’s no surprise that the non-violence stance of the Civil Rights movement and the peace and love ethos of the Hippies soon gave way to the anger and unrest of communities who felt under siege – their heroes being picked off one at a time. 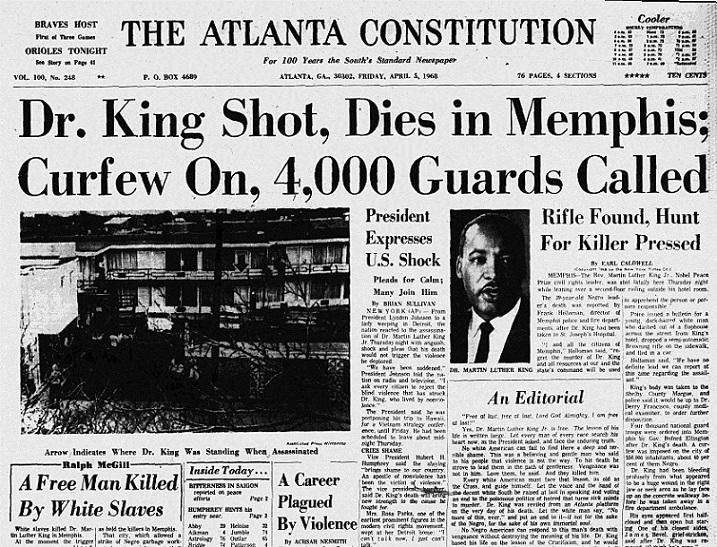 Following Martin Luther King’s death, RFK, who was campaigning at the time, broke the devastating news to a largely black audience in Indianapolis, Indiana – it’s one of the most heartfelt addresses you’ll ever hear from a politician. He’d been warned that the police might not be able to protect him if, on receiving this news, people began to riot, as would, understandably, happen in black communities throughout the US, but nevertheless he chose to stand before the crowd, unscripted, on the back of a flatbed truck, to deliver one of the greatest speeches in American history, his inclusion of the Ancient Greek poem by Aeschylus, so fitting:

“Even in our sleep
pain which cannot forget
falls drop by drop upon the heart until,
in our own despair, against our will,
comes wisdom through the awful grace of God.”

I vaguely remember the second Kennedy assassination, certainly enough to realise who ‘Bobby’ was when I’d immersed myself in the Marvin Gaye version of ‘Abraham, Martin And John’ a couple of years on. I was 10 at the time and had dived into my brother and sister’s singles collections, mainly Soul records on labels like Stax, Atlantic and, of course, Tamla Motown. Gaye had recorded the song as the opening track on Side 2 of his 1970 album ‘That’s The Way Love Is’. Struggling to make sense of an ever more fractured world, with the Vietnam War raging, inner-cities rioting and a growing divide between those who have and those who have not, Gaye would become increasingly introspective, leading to the recording of his masterpiece of social commentary, ‘What’s Going On’, his next LP in 1971. His version of ‘Abraham, Martin And John’, beautifully orchestrated by the great producer Norman Whitfield, is seen as a precursor to this, as he sought to shed his ‘ladies man’ image and express himself on an altogether deeper level.

When I say immersing myself, I’d play records over and over and over – really sink them into my soul – and ‘Abraham, Martin And John’ was one of my most-loved singles back then, so who can tell how many times I listened to it. I felt every word, it’s such a majestic vocal performance, the highlight for me being the way he sings ‘can you tell me’ in the Martin verse, expressing the deeper grief felt by the black community regarding this particular loss (at least that’s what I’ve always figured). It’s easy to say that it touches my heart, but it’s wider than that – more like saturates my spirit, the welling up of emotion and accompanying physical sensation sometimes overwhelming. Only a human voice can do that to you (another personal example is Otis Redding singing ‘I can’t do what ten people tell me to do’ in ‘(Sittin’ On The) Dock of The Bay’).

Whilst the Dion original offered something of a hopeful ending with its final lines, Gaye’s 4th verse about Bobby simply repeats the first 3 – no ‘up over the hill’ here to give things a positive final spin, just ‘I just looked around and he was gone’ once more. That was the way I’d always known it, without sentiment, the words just expressing the senseless loss and helplessness. No answers, no explanation, no closure – this was a life lesson bestowed in the grooves of a record, its gravity in the directness and simplicity.

When I finally heard the Dion version, given how intimately I knew the Marvin Gaye single, those end lines felt out of place and somewhat twee, as though, like children, Holler felt the listeners needed a positive twist to what, in essence, is a pretty morbid subject matter. I’m not sure if Gaye was ever asked why he left those words out, but it’s clear he found them superfluous, and must have felt that giving the listener the ‘over the hill’ escape clause somehow lessened the impact of the song.

To mark the 50th anniversary of his death, the 4-part documentary series, ‘Bobby Kennedy For President’ was made available via Netflix earlier this year – a brilliant insight into his character and political career, it comes highly recommended if you want to dig deeper:
https://www.netflix.com/gb/title/80174282

One Response to A Song For Bobby