By Greg Wilson on December 30, 2013 in Black Culture, DJ / Club Culture, The Eighties 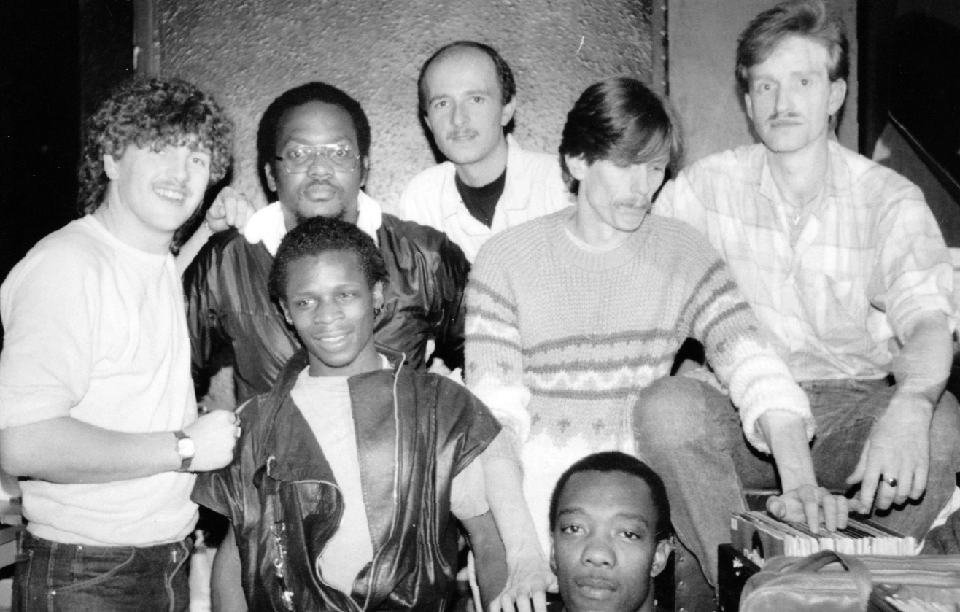 Having just marked the 10th anniversary of my DJ return, I’ve now reached the 30th anniversary of when I cut out first time around at the end of ’83 – my last Wigan Pier appearance on Tuesday 28th December, before rounding things off at Legend the next night. During the same week my final mix for Mike Shaft’s show on Piccadilly Radio was broadcast. Following on from the previous year’s ‘The Best Of 82’, which had caused such a stir, ‘The Best Of 83’ did what it said on the tin, bringing together the biggest tunes I was playing that year. My successor, Chad Jackson (a future DMC World Mixing Champion) would continue the ‘Best Of’ tradition on Piccadilly, with the baton later handed on to Stu Allan – these end of year mixes continuing until 1992.

Piccadilly Radio was a hugely important part of the city’s dance music heritage – I wrote this about the station in 2008:
http://www.electrofunkroots.co.uk/articles/dont_touch_that_dial.html

It’s via Mike Shaft, synonymous with black music on the Manchester airwaves, that I came across the remarkable photo that provides the lead image to this piece. I’d never seen this picture before but it turned up on Mike’s website recently and really gave me one of those nostalgic jolts.

Mike can’t recall who took the photo, or where it was taken, but I think I can more or less answer the latter. The fact that I’m still somewhat shaggy-haired dates it as 1983, a few months after I mixed live, freshly bubble-permed, on TV’s ‘The Tube’ in the February. Looking back through the archives, the only time all these DJs appeared on the same bill was for a trio of All-Dayer dates in May of that year, held at The Leadmill in Sheffield, Angels in Burnley and Tiffany’s in Manchester – so I can confidently narrow it down to one of these 3 dates. 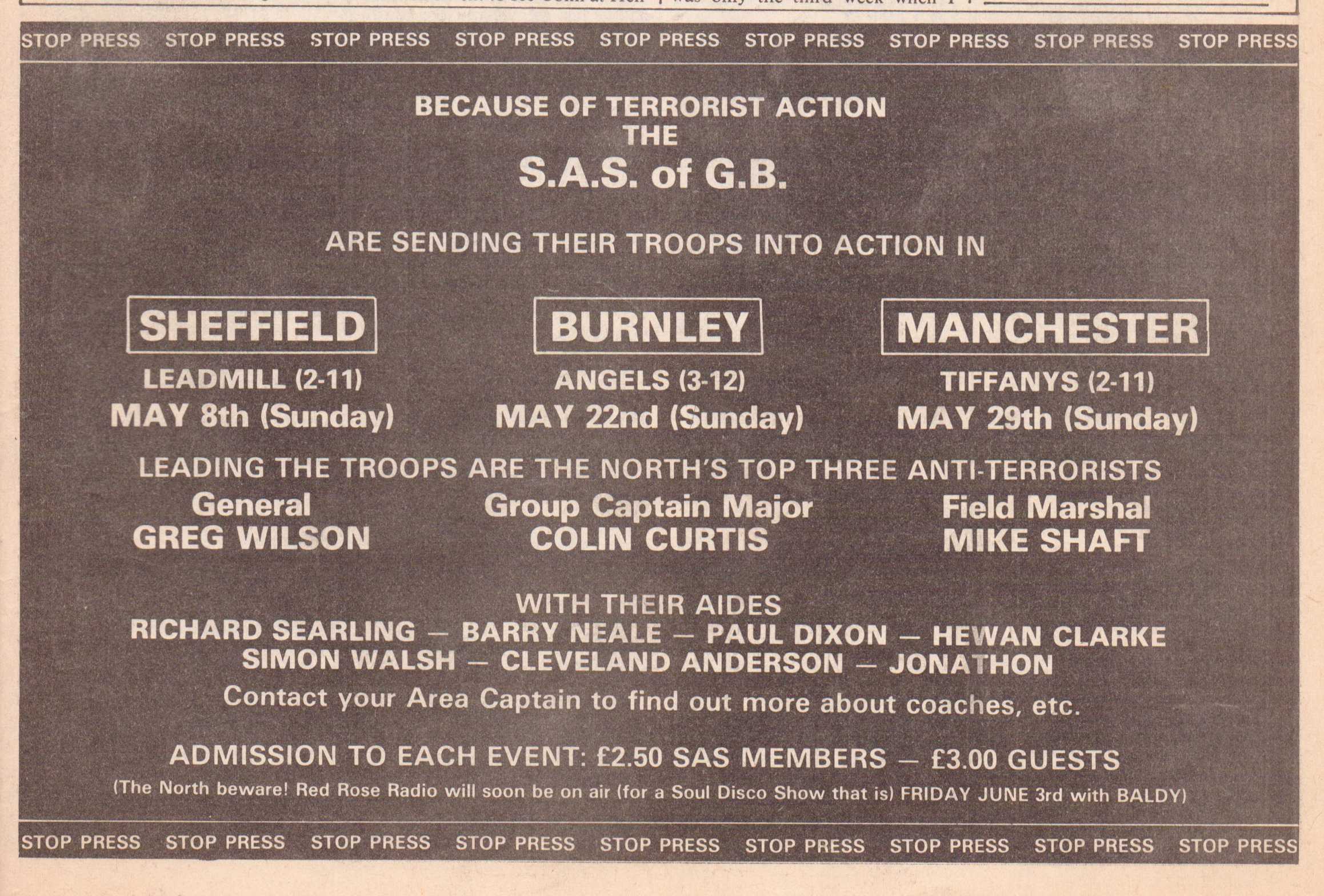 All-Dayers were held on Sundays and Bank Holidays, the most high profile of these bringing together a line-up of what might be referred to as ‘big name DJs’, those who hosted successful weekly club nights throughout the region. The DJ’s pictured lived in Stoke-On-Trent, Nottingham, London, Wigan and Bolton, with 2 from Manchester.

The All-Dayers in question were promoted by former Northern Soul stalwarts, Richard Searling and Bernie Goulding, under the S.A.S. of G.B. banner (Soul Appreciation Society Of Great Britain). Bernie wasn’t a DJ, but a record dealer who I’d met back when I was still at the Golden Guinea in New Brighton during the late ’70s. He’d sometimes drive over with a stock of new imports for me to listen through – ‘I Can’t Turn The Boogie Loose’ by The Controllers, which was one of the tracks on my first ‘Credit To The Edit’ album in 2005, was a 12” I remember picking up from Bernie on one of his visits.

Anyhow, here’s a bit of info about each of the DJs pictured, and their own individual legacy. It features some bona fide icons of the scene up North – collectively a group of DJs whose contribution to UK club culture is quite simply immeasurable: 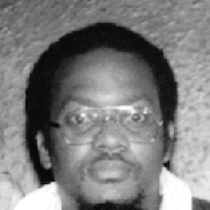 Mike was the lynchpin of the scene in the North-West, given the reach of his Soul Show, ‘T.C.O.B. (Taking Care Of Business)’, a weekly must listen for pretty much all the people in the region who professed to having their ear to the ground when it came to the latest black music releases – a sizeable audience to say the least. He invited me to put together mixes for the show, the first of their type on UK radio and a major development in my own DJ career. Apart from radio, he was the DJ at a number of important Manchester club nights, at venues including Pips, Rafters, Rufus, Placemate 7 and Legend.
Interview here at electrofunkroots:
http://www.electrofunkroots.co.uk/electrospective-event-mike-shaft-interview 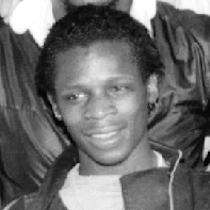 At a time when it was extremely rare for a Southern DJ to play up North, and vice-versa, Cleveland was the exception to the rule, a London DJ who became a regular part of the line-up at All-Dayers in cities including Manchester, Birmingham, Sheffield, Leeds, Nottingham etc. This gave him a unique overview of what was happening on both sides of the Watford Gap during the early ’80s period (he talks about this in the interview linked below). Cleveland would bring coach loads up from West London, and was largely responsible for introducing Black Echoes club columnist Lindsay Wesker to the scene in the Midlands and North, which he wrote about with great zeal:
http://www.electrofunkroots.co.uk/cleveland-anderson 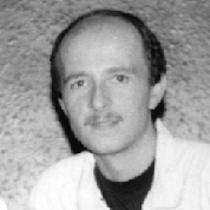 One of the leading lights of the Northern Soul movement, Richard initially made his name at Va-Va’s in Bolton, where he gained major kudos for unearthing one of the scene’s defining tracks, ‘Tainted Love’ by Gloria Jones (subsequently to become a multi-million selling cover version by Soft Cell). Forming one of the most famous DJ partnerships of all, when he hooked up with Russ Winstanley at Wigan Casino, Richard is a Soul aficionado of the highest order. I remember being absolutely staggered when I saw the room in which he housed his record collection back in the early-’80s – I’d never seen so much vinyl meticulously stored in a room at someone’s home. 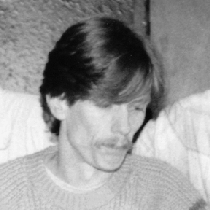 A triple legend who innovated on the Northern Soul, the Jazz-Funk and the early House scenes in the UK. I can’t think of another DJ who was central to the development of 3 distinct movements – with a whole string of influential residencies during the ’70s and ’80s, including the Golden Torch in Tunstall, Stoke, Blackpool Mecca, Rafters, Berlin and The Playpen in Manchester, and Rock City in Nottingham. Colin is undoubtedly one of the most important contributors to club culture in this country. It’s typical of him that, even as this picture is being taken, he still can’t resist taking a look through the record box to his left. Interview here at electrofunkroots:
http://www.electrofunkroots.co.uk/electrospective-event-colin-curtis-interview 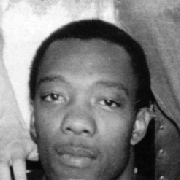 The quintessential Manchester DJ, Hewan has been around since the late ’70s when he started out in the Soul room at Pips. He’d become one of the North’s foremost Jazz specialist and a regular at the various All-Dayers in the region. However, his greatest claim to fame is being the original resident at The Haçienda during its formative years. His association with the black scene in Manchester, via clubs like The Gallery, Berlin and The Playpen, as well as Moss Side’s Reno, made him a central figure during the pre-Rave era. Interview at electrofunkroots:
http://www.electrofunkroots.co.uk/interviews/hewan_clarke.html 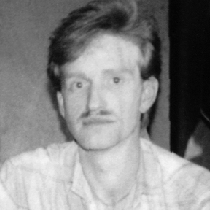 Jonathan (he didn’t DJ under his full name) was a young up-and-comer on the Northern Soul scene, but at a point when it was waning in popularity. As a one-time owner of Frank Wilson’s ‘Do I Love You (Indeed I Do)’ his name is forever a part of Northern Soul folklore – Jonathan paid a then hefty £250 for the record in 1978, selling it 12 months later for a profit of £100 (in 2009 a copy of the single sold for staggering £25,000!), As with many of his contemporaries, he subsequently embraced Jazz-Funk, before steering Nottingham’s Rock City, one of the top clubs of the era, through Electro-Funk and on into Hip Hop and House. 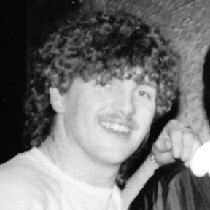 All of these DJs are still active to one level or another, in the clubs / on radio – music, especially black music, coursing through their veins. A special breed indeed, and all individuals I have great personal respect for. The very fact I’m in this photograph, alongside these illustrious figures, illustrates the fruition of my personal aspirations from when I set off on my DJ path in the mid-’70s – to eventually be held in high regard as a black music specialist. The company I kept confirmed this.

Quitting as a DJ, 7 months on from when this picture was taken, whilst I was right at the top of my game, and still only 23 years old, was a huge decision, and a somewhat reckless one given I’d left myself no financial safety net if things didn’t work out the way I’d hoped (which invariably they didn’t). Before you ask, as so many have before, ‘why did you pack it in?’, I refer you to the piece I wrote to cover this question, which can only be answered in a multi-layered sort of way:
http://www.electrofunkroots.co.uk/misc/why_did_i_quit.html

So rather than dwell on the implications of this decision, and how this impacted, and continues to impact on my life (although much more positively during more recent times), whilst marking this particular anniversary it’s good to raise a glass to my fellow DJs back then, both for their individual contributions to the scene and combined passion for the music, plus all the discussion, debate and personal philosophizing I’ve been fortunate to share in their company.

Serving as a musical time capsule, the final installment of my Early ’80s Floorfillers series has just been uploaded. These were my 10 biggest tracks when I called it a day 30 years ago: