By Greg Wilson on October 5, 2012 in Merseyside, The Beatles, The Sixties 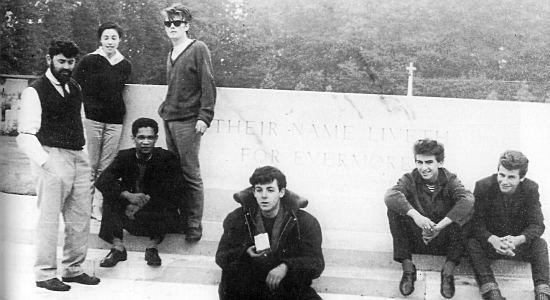 British Pop music was very different in 1962 – nowadays we take for granted the fact that the UK has been responsible for so many innovations within Pop and Rock, but this simply couldn’t have happened without The Beatles, and subsequently other artists who first made their mark in the ’60s, like The Rolling Stones, The Who, The Animals, The Kinks, The Yardbirds, The Spencer Davis Group, The Small Faces, Pink Floyd and Led Zeppelin etc. Back in ’62 the country’s biggest Pop star was Cliff Richard, an Elvis Presley wannabe who ran up a string of hits following his breakthrough with ‘Move It’ in 1958, but failed to make any impression on the US market. British records, apart from the odd one-off / novelty hit, were not taken seriously over in America – the big breakthrough would come in February 1964 when The Beatles topped the US chart with ‘I Want To Hold Your Hand’ (just 2 months later they’d famously occupy all of the top 5 places on the US singles chart, as well as the top 2 album positions).

‘Love Me Do’ would peak at #17 in the UK, the lowest position for an original Beatles release (although it would go all the way to #1 Stateside in ’64, and to #4 on the UK chart when re-released in 1982 to mark the 20th anniversary). Legend has it that Beatles manager (and record shop owner) Brian Epstein bought thousands of copies of the single in order to push it into the chart, although this was denied by Epstein and is regarded as a myth by Merseybeat editor Bill Harry.

Love Me Do Wikipedia:
http://en.wikipedia.org/wiki/Love_Me_Do

Living To Music – Arctic Monkeys ‘Whatever People Say I Am, That’s What I’m Not’
Video Blog – Happy Mondays ‘Wrote For Luck’ & ‘WFL’

3 Responses to Their Name Liveth For Evermore