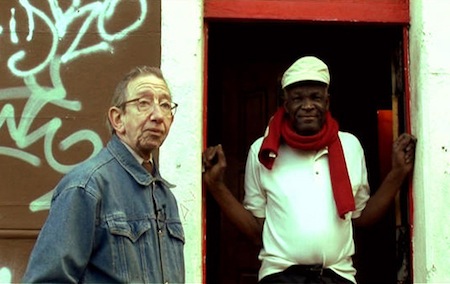 Thanks to the Ranking Maz P for making me aware of this wonderful short film documentary about DJ Derek (aka Derek Serpell-Morris), filmed 4 years ago and directed by Jamie Foord. Watch here on Vimeo in 2 parts (not sure why it’s not online as a complete item, having a total running time of less than 19 minutes):

Derek, then 67 (now in his ’70s), has become something of an institution during recent years, adored by an ever-increasing fanbase, most of whom are young enough to be his grandchildren (and, dare I say it, even great grandchildren). He’s now very much a firm festival favourite, and greatly in demand for club bookings far and wide. There’s obviously the novelty of having an OAP rocking the house, but novelty only goes so far, and this is a man who has lived, and continues to live the music he loves.

This music happens to be Reggae, in which he was schooled in the blues parties and shabeens held within the St Pauls district of his home city, Bristol. It was here where he began his DJ career, playing to an almost exclusively black audience at the Star and Garter pub. He attracted an older following (he wasn’t exactly a young man himself at the time, already past his mid-’30s), and called himself ‘Sweet Memory Sounds’ when he deejayed (which he picked up from the words of a customer who was complimenting his selections). Over a quarter of a century later, in 2006 he’d come to wider attention via his Trojan Records compilation of personal Reggae favourites, ‘DJ Derek Presents Sweet Memory Sounds’. 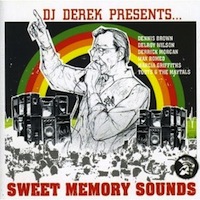 I met Derek about 5 or 6 years ago at a party in London thrown by Groove Armada. He was playing, in his trademark style, from 2 mini-discs that contained all his tunes. This was directly before I went on, so we were able to have a brief chat before the changeover. He told me that he’d been deejaying for a long time, ‘since 1978’, which made me feel pretty old myself, given that my own club debut was in 1975!

Having previously been an accountant, Derek had always had a great love of black music, dating back to the ’50s, when, like many other teenagers of the time, he discovered Rock & Roll, but, unlike the majority of them, he dug deeper, discovering its roots in Rhythm & Blues via Radio Luxembourg and, getting even closer to source, by tuning into American Forces Network (which broadcast to US military personnel stationed in the UK). He talks about this, and his ongoing love of black music, American and Jamaican, via Soul, Ska, Rock Steady and Funk, in the documentary, but Reggae would become the great enduring musical love of his life.

Away from music, he indulges his obsession with real ale, and travels the country fulfilling his intention to visit every Wetherspoon pub in the land! This grew out of the accomplishment of his previous aim, which was to travel on all the National Express bus routes in the UK. It’s safe to say that Derek is a fully-fledged anorak, in the original sense of the term, having developed a fascination with buses, and where they come from and go to. As they say, it takes all sorts, but big respect to a man who loves his life and lives it to the full.

I’d also like to point you in the direction of another brilliantly observed piece about Derek – this time something more recent, uploaded last month by director Yan Murawski. Titled ‘Derek’ (aka ‘Never Judge A Book By Its Cover’), it says so much about this extraordinary DJ in 4 short minutes:
http://player.vimeo.com/video/47731096 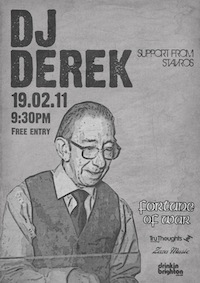