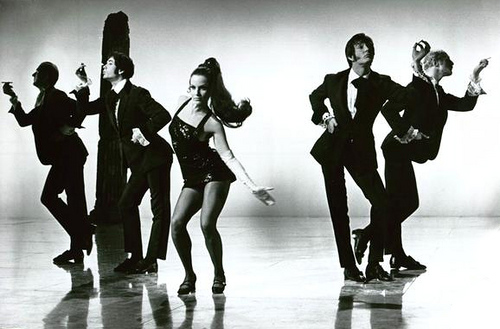 Bob Fosse was one of the most innovative choreographers of both Broadway’s and Hollywood’s post-war era, his best-known work being ‘Sweet Charity’ (director / choreographer – stage 1966, film 1969), ‘Cabaret’ (director / choreographer – film 1972), ‘Chicago’ (writer / director / choreographer – stage 1975), and ‘All That Jazz’ (writer / director / choreographer – film 1979). More recently one of his routines was, posthumously (Fosse died back in 1987), the influence behind Beyonce’s acclaimed ‘Single Ladies (Put A Ring On It)’ video in 2008. The singer had seen the TV clip of ‘Mexican Breakfast’, a Fosse choreographed number,  on YouTube – having original been aired on the Ed Sullivan Show in 1969, it’d been effectively mashed-up with a contemporary hit, 2006’s ‘Walk It Out’ by Unk: http://www.funnyordie.com/videos/e8a7d45f40/walk-it-out-fosse-from-ilikestuff. Beyonce drew inspiration from both the dancing, and the way it was filmed, with a camera set on a crane (the dancers included Fosse’s wife, Gwen Verdon).  No stranger to Fosse’s work, she had previously referenced ‘The Rich Man’s Frug’ in the video to 2007’s ‘Get Me Bodied’: http://youtu.be/tQaYXaPliIs

This is undoubtedly one of my favourite movie dance sequences – along with the memorable ‘Big Spender’ (a harbinger of the stylistic sleaze Fosse expertly brought to the academy award winning ‘Cabaret’),this  is the highlight of ‘Sweet Charity’, which, otherwise, isn’t a film I’d place anywhere near my personal favourites (an opinion echoed at the time by the general populace when it was a box office flop, losing a whopping $12,000,000, and was said to have almost put the mighty Universal Pictures out of business in the process).

The Frug was a short-lived American dance craze of the ’60s. Lead dancer, Suzanne Charny, got her big break strutting her stuff on the weekly pop show Hullabaloo, aired on US TV during the mid-’60s (it was good to find some clips of her online with the Hullabaloo Dancers, including this interpretation of the theme to the Batman TV show: http://youtu.be/amvE30VCk0w). She then went on to perform ‘The Rich Man’s Frug’ in the original Broadway stage production of ‘Sweet Charity’ in 1966, before she reprised her role on the big screen.  She’d subsequently entertain the troops in Vietnam and pop up now and again on TV, her acting credits including appearances in episodes of ’70s favourites like ‘Starsky & Hutch’, ‘Kojak’, ‘The Six Million Dollar Man’, ‘The Incredible Hulk’ and ‘The Rockford Files’. In 2004, at the age of 60, her contribution to dance was recognised in the US by the Professional Dancers Society.

That’s pretty much all that’s known about her – incredibly, nobody seems to have thought to interview her about ‘Sweet Charity’ and working with Bob Fosse (if someone has, they certainly haven’t thought to share it online). In my eyes, her sensational ‘Rich Man’s Frug’ performance affords her the status of cult screen goddess, as for those few marvellous minutes she’s coolness personified, perfectly channelling the somewhat surreal eccentricity of Fosse’s audacious choreographic mind with true iconic style – the long pony tail, little black dress and white gloves are stark and striking, especially given her largely expressionless face and the sheer quirkiness of movement.

What really brought it home for me was when I watched the ‘Fosse’ stage production on TV (its Broadway debut was in 1999). Although it was the same steps (albeit without Fosse himself around to fine tune), the girl chosen as lead Frug dancer was, as they say, close but no cigar, she just didn’t have the command of movement or the sleek sensuality Suzanne Charny brought to the piece – like a cover version that’s technically good, but falls down on that essential emotionality (or, in this case, essential non-emotionality). 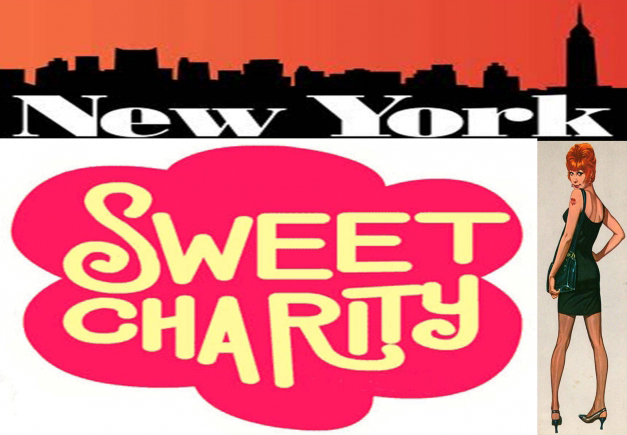 *(added on 28.09.12) I’ve just come across a whole section about Suzanne Charny on pages 42-47 of a book called ‘Glamour Girls Of Sixties Hollywood’ (which is available to read at Google Books – link below), where she does indeed talk about ‘Sweet Charity’ and Bob Fosse:
http://books.google.co.uk/books?id=CCUSa_GmDo8C&pg=PA44&lpg=PA44&dq=glamour+girls+of+sixties+hollywood

*(added on 06.08.14) Thanks to Scott Gardner for informing me that Suzanne Charny is nowadays a sculpturer – here’s her website: http://charnysculptures.com/home.html