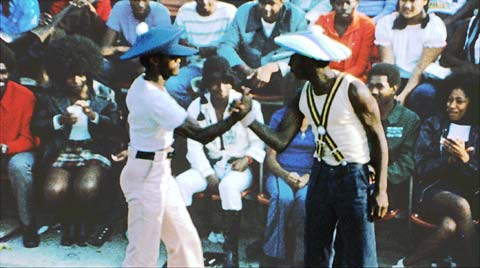 Rufus Thomas ‘The Breakdown’ & ‘Do The Funky Chicken’

Old timer Rufus Thomas was on the crest of a renaissance as he took to the stage at the Wattstax Music Festival, which was held at the Los Angeles Memorial Coliseum on August 20th 1972. The early ’70s had brought him 3 hit singles, ‘(Do The) Push And Pull’, The Breakdown and ‘Do The Funky Chicken’, one of the biggest dance tracks of the era, and he was hotter than he’d ever been. The veteran entertainer played it to the full, drawing on his vast experience as a showman extraordinaire, his pink threads a sensation as, with perfect comic timing, he asks the audience “ain’t I’m clean?”.

An important time capsule, insightfully caught on film by Mel Stuart, Wattstax took its title from the combination of Watts, the predominantly black LA neighbourhood, which had been the scene of one of the most destructive riots of the ’60s (taking place over 5 days between Aug 11th-15th 1965), and Stax, the seminal Memphis record label, which brought us so much great Soul music, from legendary artists including Otis Redding, Booker T. & The M.G.’s, The Staples Singers, Isaac Hayes and Johnnie Taylor. Wattstax became the biggest African-American gathering since the ‘Million Man March’ in 1965, and to mark the sheer scale of the occasion, which was dubbed ‘the black Woodstock’, the Reverend Jesse Jackson took to the stage at the start of the festival and gave the invocation, which began; “this is a beautiful day, this is a new day”, going on to announce that “today on this programme you will hear Gospel and Rhythm & Blues and Jazz, all those are just labels, we know that music is music…”. This speech was, of course, sampled to great effect by Andrew Weatherall at the intro of his remix of ‘Come Together’ by Primal Scream (1990), and later by myself in the opening and closing tracks on my Essential Mix in 2009.

This clip says everything about the importance of dance in black culture. When the crowd invade the field they don’t run to the front of the stage to stand and watch the performance, instead their first thought is to find dancing space so they can get down and do their thing. Everywhere the camera scans there’s serious dance action, including footage of some of the original pop ‘n’ lockers, whose style would evolve into body popping (see: https://blog.gregwilson.co.uk/2010/11/west-coast-moves/), and the sassy girl in the crowd wearing the red polka dot mini skirt, who causes quite a stir (I got my multi-talented mate Tim Collins, to make a similar dress for dancer Nandi Bhebhe when I hosted the silent disco at Liverpool’s Tate Gallery in 2009 – the other dancer that night, Christa Powell, wore an outfit based on the girl in the checked shirt, denim hot pants and tasseled boots who joins in with the pop ‘n’ lockers: http://youtu.be/zqYbo10PUV0).

I’m sure you’ll agree that Rufus Thomas’s control of the audience is majorly impressive. Like he says: