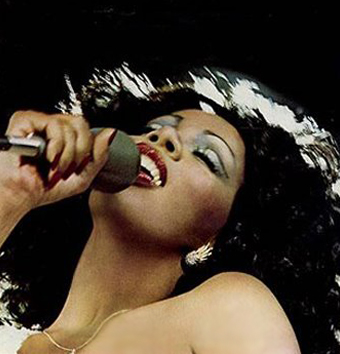 Just heard the news that disco diva Donna Summer died today at her home in Key West, Florida, aged 63. She’d been diagnosed with cancer last year, but had kept her illness private.

Her breakthrough single, the sensuous ‘Love To Love You Baby’ was released in the US in December 1975, the month I started out as a club DJ, and would go on to reach #4 on the UK chart, whilst the follow-up, an uptempo version of the Barry Manilow song ‘Could It Be Magic’ would also pick up plenty of club play, although it peaked at the more modest position of #40 (it would subsequently be covered in a similar style by Take That in 1992, for whom it was a top 3 hit). However, the record that cemented her status as the Queen of Disco (a mantle she took over from the original Disco Queen, Gloria Gaynor), was the seminal electronic dance masterpiece, ‘I Feel Love’, which topped the UK chart in 1977.

The hits would keep coming for the remainder of the ’70s – ‘Down Deep Inside (Theme From The Deep)’, ‘I Remember Yesterday’, ‘Love’s Unkind’, ‘I Love You’, ‘Rumour Has It’, ‘MacArthur Park’, ‘Hot Stuff’, ‘Bad Girls’ and her duo with Barbara Streisand, ‘No More Tears (Enough Is Enough)’, all reaching the top UK 20 – her association with European production duo Giorgio Moroder and Pete Bellotte, dating back to ‘Love To Love You Baby’, being one of the defining aspects of the Disco era.  Things tailed off in the ’80s, although she had a renaissance towards the end of the decade with a trio of top 20 hits in collaboration with British pop producers Stock Aitkin Waterman.

One of my personal favourite Donna Summer recordings was her 1982 cover of ‘State Of Independence’ (originally recorded by Jon & Vangelis), produced by the great Quincy Jones and backed by an all-star choir, which included Michael Jackson, Brenda Russell, James Ingram, Dionne Warwick, Michael McDonald, Lionel Richie and Stevie Wonder. Footage from the recording here:
http://youtu.be/84_IQKtNYhg

Summer was never comfortable with her sex siren image and in 1980 became a born-again Christian. In the mid-’80s she was embroiled in controversy, accused of making anti-gay remarks (a large proportion of her fan base being gay men). She allegedly said that the then relatively new disease, AIDS, was a punishment from God for the immoral lifestyles of homosexuals. She denied that she had ever made any such comment, and would later state that it had been ‘a terrible misunderstanding’.