By Greg Wilson on October 29, 2011 in Manchester, Radio, RIP, The Eighties, The Fifties, The Forties, The Nineties, The Seventies, The Sixties, TV 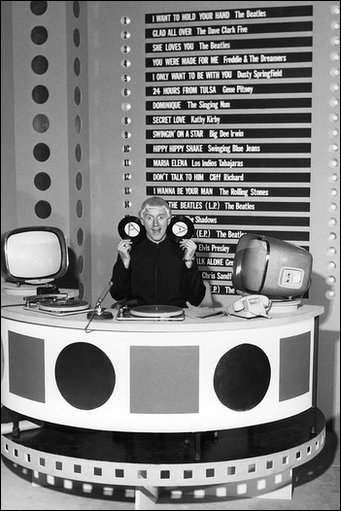 Leeds born Savile claimed to be the first DJ to use two turntables, in 1947. Although this remains disputed, there’s no doubt that Savile was a pioneer when it came to playing records in dance halls, most notably in his home city and across the Pennines in Manchester. Authors Bill Brewster & Frank Broughton would more recently hail him as ‘the first Superstar DJ’ in their history of the disc jockey, ‘Last Night A DJ Saved My Life’.

He’s best remembered for hosting Top Of The Pops in the ’60s and ’70s (he presented the first ever TOTP, from Manchester on New Year’s Day 1964, when The Beatles ‘I Want To Hold Your Hand’ was at Number 1), making dreams come true via his popular TV show, Jim’ll Fix It, which ran from 1975–1994, and his ceaseless charity work.

The eccentric long platinum blonde haired, cigar smoking, tracksuited / shellsuited, blinged-up showman also, bizarrely, enjoyed a stint as a professional wrestler. As a radio presenter he was originally heard on Radio Luxembourg between 1958-1967, before switching to BBC Radio 1 in 1968, the year following its launch. His famous catchphrases included “Now then, now then”, “As it ‘appens” and “How’s about that, then?”.

Bill Brewster explains the reasons why he believes Jimmy Savile was the greatest DJ of all-time:
http://youtu.be/J7v5QVpb1vE

Savile talks about his early days as a DJ here, in an interview from 2004 with Frank Broughton:
http://www.djhistory.com/interviews/jimmy-savile

*(added on 01.10.12) Rumours of Savile’s alleged abuse of under-age teenage girls have circulated for many years. A programme to be broadcast on ITV this Wednesday, ‘Exposure: The Other Side Of Jimmy Savile’ investigates these allegations, and today a number of newspapers carry related stories. The highly respected Pop commentator and broadcaster, Paul Gambaccini, said he had been waiting 30-years for the allegations to come out – read what he had to say here, in The Independent:
http://www.independent.co.uk/news/uk/home-news/paul-gambaccini-claims-sir-jimmy-savile-used-charity-work-to-prevent-sexual-abuse-of-schoolchildren-being-exposed-8191761.html

**(added on 20.11.12) With the Metropolitan Police describing Savile as ‘a predatory sex offender’, and Operation Yewtree, their investigation into his alleged sexual exploitation of hundreds of victims, which was launched last month, opening in excess of 400 lines of enquiry, he is no longer regarded the national hero he was lauded as being at the time of his death, but, instead, he is now reviled as the most notorious child abuser in British history. His infamy has obviously overshadowed his legacy to club culture, as an iconic British disc-jockey, and, in a new blog post, ‘Jimmy Savile – DJ Originator Or More Smoke And Mirrors?’, his cultural significance is re-assessed in light of these harrowing revelations:
https://blog.gregwilson.co.uk/2012/11/jimmy-savile-dj-originator-or-more-smoke-and-mirrors/

Whatever Happened To The Soul?
Racism In English Football