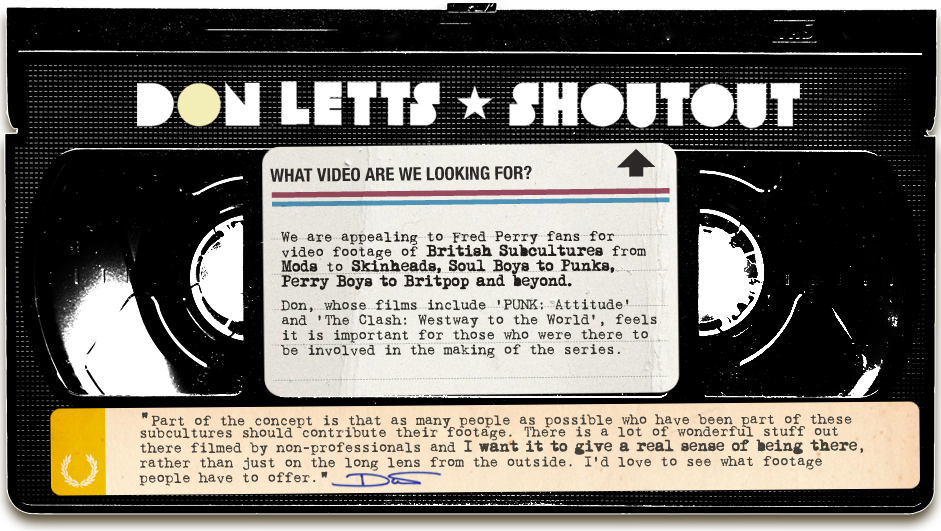 Just wanted to make you aware of a project my former Invisible Players colleague, Don Letts, has been commissioned to produce, focusing on the clothing brand, Fred Perry, and its cultural relevance in the UK from the Mods in the ’60s to Britpop in the ’90s, and right up to date via their association with Amy Winehouse, whose designs for the brand continue to be released, with the full blessing of her family, following her untimely death last July.

Through the ‘Tell Us Your Story’ website, Don is currently asking for people to come forward with any Fred Perry related footage they may have recorded down the years, whilst you can also submit your photos and share your memories on the site. So if you are, or you know someone who can contribute, the full lowdown is here:
http://www.fredperrytellusyourstory.com/stories/upload

Don, who shines immortal as the DJ that turned the Punks on to Reggae at London’s Roxy (’76/’77), and who later experienced chart success as a member of Big Audio Dynamite in the ’80s, has made numerous films and documentaries since his 1978 debut ‘The Punk Rock Movie’.  He currently presents his twice weekly ‘Culture Clash’ radio show on BBC6 Music.

Manchester Vibes In The Area
My Favourite Number 1