By Greg Wilson on October 21, 2011 in Black Culture, Hear, Merseyside, My First / My Favourite, Records, The Seventies, The Sixties 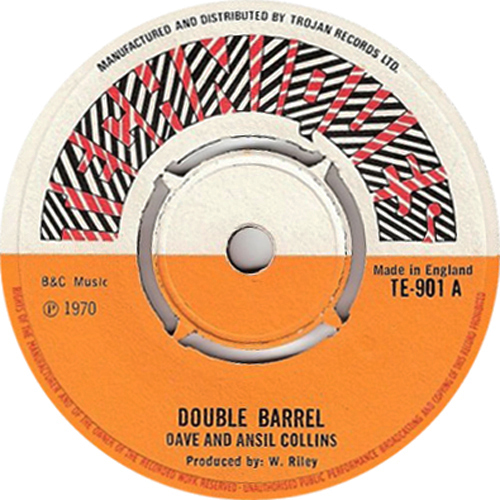 What was your favourite number 1?

Without ever properly considering this question I’ve heard myself instinctively tell people, on more than one occasion, that mine is ‘Double  Barrel’ by Dave & Ansil Collins, which claimed the top spot on the UK chart for the first 2 weeks of May 1971, when I was 11. Like everyone else, I assumed Dave & Ansil were brothers, but Dave was Dave Barker, who’d had previous success in Jamaica as a solo artist working with the great producer Lee ‘Scratch’ Perry. For ‘Double Barrel’ he’d been brought into the studio by another producer, Winston Riley, and asked to add a talking voice to Ansil’s backing track (Ansil was really Ansell, also sometimes credited as Ansel – I’ll stick to the spelling on the single I owned). Dave was encouraged, as he told Lloyd Bradley in ‘Bass Culture’, to “t’ink big like some big giant man. Like Hercules or James Bond, Double-O-Seven, or somet’ing”. Taking up the challenge he toasted the unforgettable line “I am the magnificent, I’m backed by the shack of a soul boss most turnin’ stormin’ sound o’soul…”

I obviously love this track to bits, but there are others I adore equally, so I figure the reason why this particular record jumps to mind is because it ticks other boxes. It sounded like nothing else, coming completely it out of leftfield, with nobody more shocked by its success than its creators. Dave recalls; “I had no idea that ‘Double Barrel’ would be so big. We did it in late 1969, maybe early 1970, and it was a few months after that I went back into Dynamic’s (the Kingston, JA, recording studio) with the same people and voiced ‘Monkey Spanner’ (the eventual follow-up, and also a Top 10 hit)…after that I forgot about them both and I was even so surprised after I hear that it was selling quite well. Then, it was in later part of 1970, almost a full year after I voice the track, that we heard the news that it was doing quite well in England, which took me completely by surprise”. Suddenly they were told to pack their bags as they were off to the UK to tour for 6-8 months, “We jus’ pick up and gone. We went practically straight from the airport in London to the Top Of The Pops studio, and the next week there it was…’Double Barrel’ the Number 1 tune in England. If I hadn’t been there and you just telling me about it I wouldn’t have believed it’.

Here they are on Top Of The Pops:

For me, this is the best kind of Number 1; a pure organic triumph, without a hint of hype – it was all there within the grooves of this inspired single. Some Jamaican musicians had happened to create a great record, which found its way to the ears (and caught the imagination) of young people over four and a half thousand miles away and, all of a sudden, those immortal words “I am the magnificent” were echoing out of the radio, and from the TV, enticing us into this genius tune that still evokes an otherworldliness to my ears despite having heard it many, many times throughout the past 40 years.

Following the Desmond Dekker & The Aces hit ‘Isrealites’ (1969), ‘Double Barrel’ was only the second Jamaican single to top the British charts. It’s also famously provided the recording debut for drummer, Sly Dunbar, aged just 15, who’d later join forces with bassist Robbie Shakespeare to form the mighty rhythm section, Sly & Robbie. The spoken intro to ‘Double Barrel’ would later inspire the opening to ‘One Step Beyond’ by Madness (1979), and when Chas Smash announced ‘this is the heavy, heavy monster sound’, he was quoting directly from the Dave & Ansil’s follow-up hit, ‘Monkey Spanner’. Needless to say, both Barker and Smash are continually spun from my Revox, and have popped up in my mixes many times – they’re like a pair of old friends. 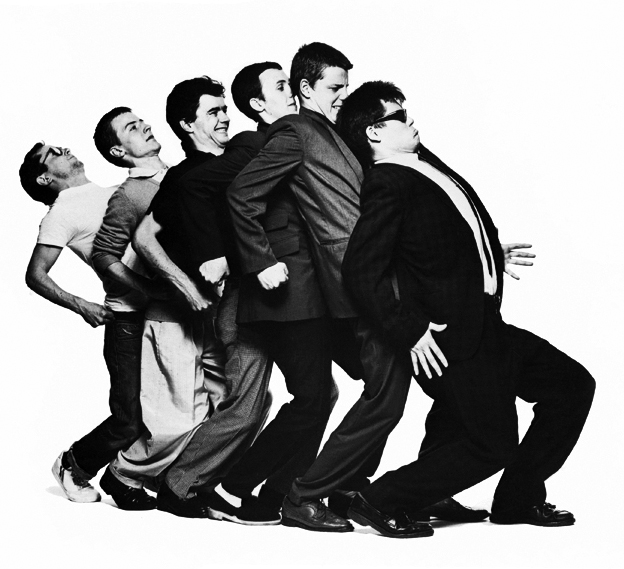 My sister bought Reggae singles as well as Soul, so most of the key releases were there for me to listen to at my own leisure at home – stuff like Desmond Dekker, Upsetters, Harry J. All-Stars, Bob & Marcia, Pioneers, Horace Faith etc. I was fortunate to be exposed to so much great black music via my sister, as I was via my brother.

My own personal memories of when ‘Double Barrel’ first came out are firmly linked in with the skinheads who descended on my seaside hometown of New Brighton in their hoards during the late ’60s / early ’70s. I have a particularly vivid recollection of walking down the promenade through hundreds of skinheads with my sister, who’d have been 17. One of them was her boyfriend at the time, but I couldn’t for the life of me fathom how she could pick him out – there were just so many of them and they all looked the same to me. It was one huge army of aggro. 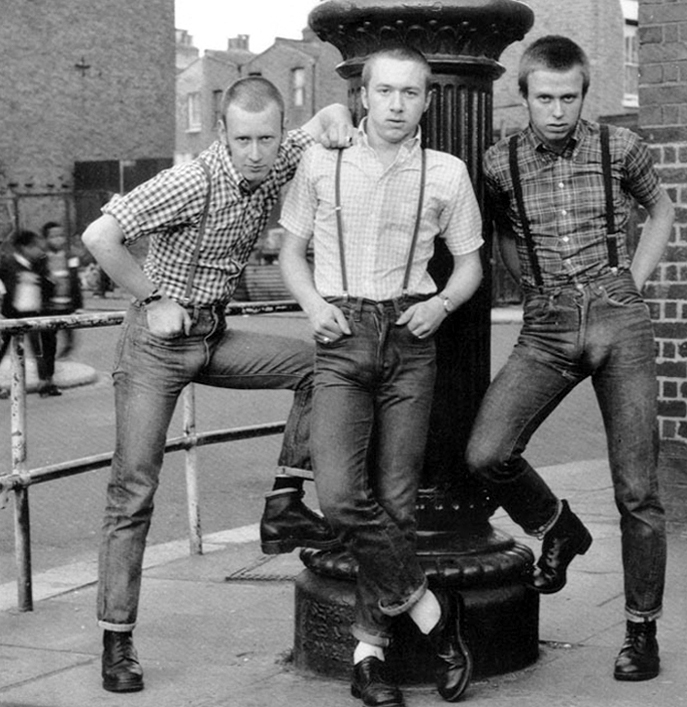 There was a sinister air when the skinheads were in town, but I couldn’t help but be fascinated by their menacing appearance. Their uniform consisted of Harrington jackets or Crombies, Ben Sherman or Fred Perry shirts (with braces), half-mast jeans, blue or white, and to top things off a pair of Dr. Martens (aka bovver boots) in cherry red or black. I was particularly mesmerised by the sight of them in full mob force surrounding the Waltzer in The Palace (the undercover fairground in New Brighton), watching the girls scream as they were mercilessly spun senseless in the cars. Music would be playing from the rides and Reggae featured prominently at the time, soundtracking the spectacle. I’d have heard ‘Double Barrel’ in this way on many occasions.

Sometimes it would kick off between the skinheads and the ‘palace lads’ (the hard as nails attendants from the fairground rides), or rival factions, and for a time running battles along the promenade would frequently erupt. There were also scooter gang cavalries of skins and suedeheads, the local one being called Axis, with all its members having the name on their screen, along with a personal number – Axis 1, of course, being the main man. Things seemed to tail off after the police clamped down, with tactics including taking the shoelaces out of their boots as they arrived on the ferries from Liverpool, or the trains from Birkenhead, in order to slow them down when trouble broke out.

The skinheads, having grown out of the Mod movement, where black music was revered by working class white kids, took up the baton in their championing of Jamaican Reggae, helping open the door to a whole wealth of recordings in the late ’60s and early ’70s, much of which was released on one of the most culturally important of all British labels, Trojan (‘Double Barrel’ was issued on the Techniques label, a Trojan subsidiary). 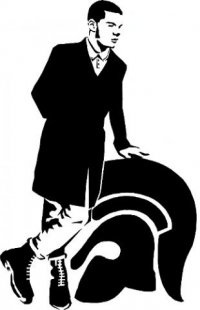 Later down the line the skinhead movement would be infiltrated with right wing extremists, and what was once racially progressive became racially divisive, a theme powerfully explored in the Shane Meadows film ‘This Is England’ (2006).

Like touring Soul and Blues artists before them, Dave & Ansil Collins were blown away by the British obsession with black music; “It still makes me smile today that it was so many white people into reggae like that. I was amazed” remembered Dave; “to see them get so wild where the music is concerned, it made me have to step back and check what is actually happening. I never believed for one minute that the English people could love music so much… These people, they pile up backstage and they are telling me about my life. Telling me the producers I recorded for, Harry J, Coxsone, Duke Reid, Lee Scratch Perry, Striker Lee, and I’m saying how come you know so much? It was amazing”.

Shoutout
Whatever Happened To The Soul?

4 Responses to My Favourite Number 1