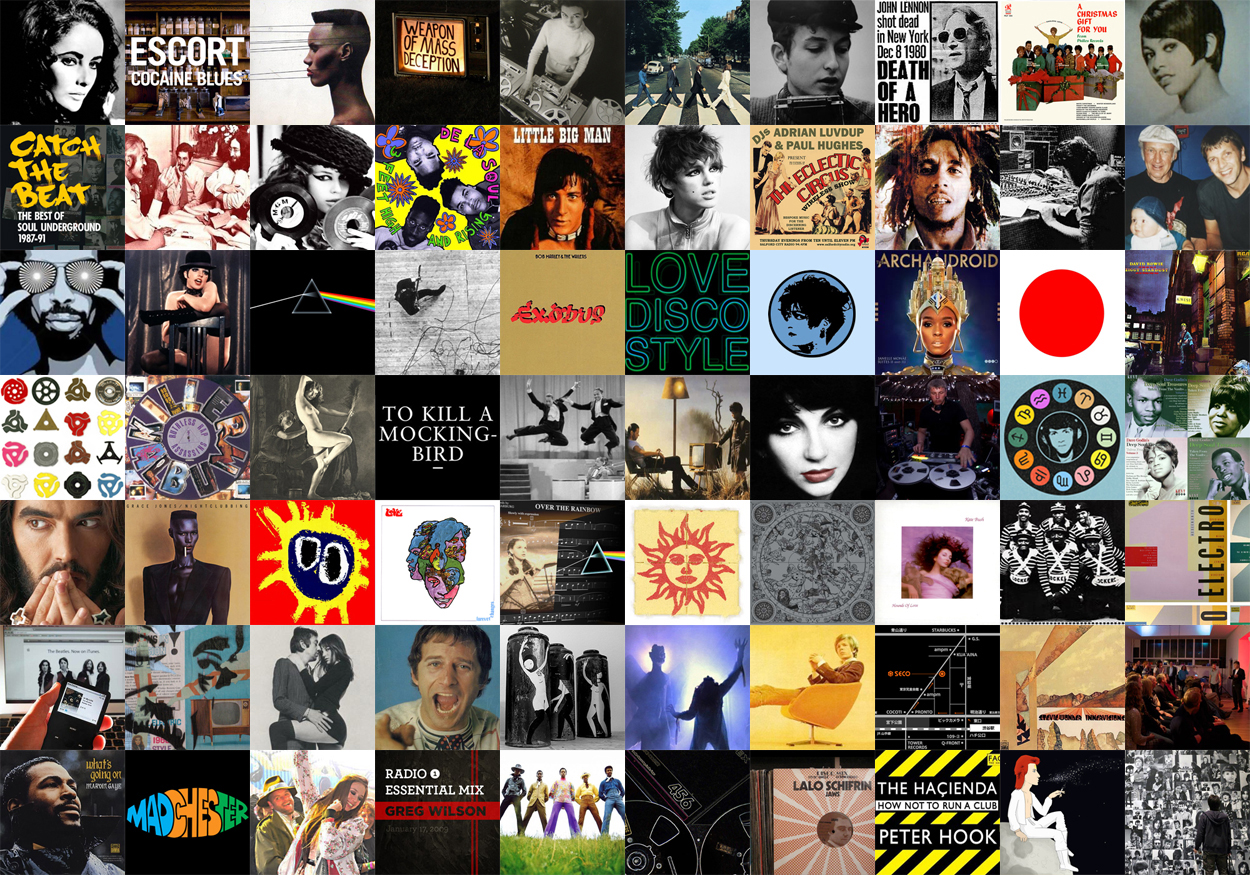 Today marks the first anniversary of my blog launch, when I quoted The Beatles to kick things off: https://blog.gregwilson.co.uk/2010/06/and-in-the-end-the-love-you-take-is-equal-to-the-love-you-make-2/

The blog has since become a mainstay of what I do, with 90 separate posts to date, an average of 7.5 per month throughout this first year. It’s pretty time-consuming, but well worth the effort as it allows me to cover a wide spectrum of interests and influences, which hopefully compliments my approach as a DJ, where I try to connect the past and present, both via the music I play and the way in which I play it.

It works on a random principle – rather than me looking for them, the topics find me. I draw from whatever enters my world at that given point, often stuff that figures in my past, but has re-appeared, for whatever reason, in my present. In some respects it’s like a diary of inspirations for me, provoking both new realisations and old memories.

The hope is that some of what you do resonates with others, so it’s hugely satisfying to look at the stats and see how people in their thousands, from all parts of the world, are visiting the site every week. I hadn’t imagined it to grow so quickly, especially given that it’s not an orthodox DJ blog centring solely around my bookings, mixes, edits etc. As I stated from the start:

I’m not a natural when it comes to writing – I’ve seen the naturals, and it flows out of them whereas I’m way more laboured. To compound this, slowing me down further still, I’m not much better than a one finger wonder on the keyboard. Everything I write about has a personal connection, either direct or indirect; I’m not one of those people who could write about remote things. I’ve written articles for some great magazines in the past, but I’ve never considered myself a writer, because it’s not something I could do on anything more than an ad-hoc basis (although the blog would appear to flip that statement on its head).

When, in 2003, prior to my DJ comeback, I wrote a couple of articles relating to the music of the early-’80s and its impact on British youth culture, I decided it would be disingenuous for me to write in the third person about things that I’d had first-hand experience of. It was only right that I put myself in the picture, bearing witness to the eras and events that had inspired me and so many others. I was aware that this may have left me open to accusations of bigging up these key aspects of our dance heritage purely because of my personal involvement in them. Having mulled this over I decided there was no other way – in order to tell this story I had to tell my own. It was impossible for me to take a totally detached view and, as objective as I try to be, there’s always going to be a degree of subjectivity in what I write, it’s unavoidable. But I needn’t have been too concerned – people told me that it was the personal connections that added meat to the bone, helping them get closer to the essence of what I was relaying – the warmth of this response shaping the way I’ve gone about things ever since.

I appreciate everyone’s support and encouragement during the past tweleve months. Thanks for reading, commenting and linking. Big up to Dan Smith for all his assistance, to Stu Robinson for setting the blog up in the first place, and to John Cunnick for unwittingly inspiring Living To Music back in 1967 (I had no idea that it would catch the imagination of so many people in the way it has).

Hopefully there is, and will continue to be, a bit of something here for everybody. If not, please pardon my indulgences.

All Along The Watchmen
SoundCloud Downloads

9 Responses to A Year In The Blogosphere