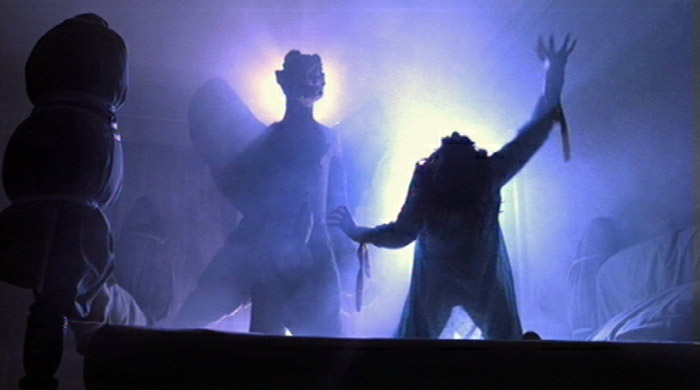 Which was the first movie to really scare the hell out of you?

Like many kids of my generation, during my pre-teen years I was fascinated by Dracula, Frankenstein, the Mummy and, of course, my favourite, The Wolfman, which used to be shown as part of a horror series every Monday night on ITV, if my memory serves me right. These mainly ‘Hammer Horrors’ (Hammer being a UK production company that specialised in the horror genre from the mid-’50s to the ’70s), were supplemented with dodgy US b-movies, one of which, for some strange reason, stuck in my memory, with a post-atomic giant scorpion terrorising an American city. I should make a special mention of a film I saw on TV that gave me a good spooking – the British classic, ‘Night Of The Demon’ (1957).

These films were shown ‘after the watershed’, so children wouldn’t be petrified into nightmares. I lived above a pub at the time, so my parents would be working downstairs, which presented the opportunity for me to sneak out of bed and watch from the doorway, with an ear on the stairs in case they popped up for something. Sometimes my brother or sister would be in and turn a blind eye, but often I was on my own.

They were all quite tame by today’s standards, but obviously made an impression. Where we lived had four floors – the ground floor was the pub, and our living accommodation was on the third floor (the fourth floor was derelict, which gave the stairway at the end of the corridor from which I watched these films, a particularly foreboding eeriness). The second floor was where the functions rooms were, plus a large kitchen that separated them. At the weekend these rooms were usually catering for weddings and various other parties and gatherings, but throughout the week they were deserted. I remember regularly freaking myself out when, at night, I walked along the corridor to the set of stairs that led to the living accommodation. These were behind a door that was directly opposite the glass door to one of the functions rooms and, as I approached it, I imagined the Wolfman or Frankenstein’s monster bursting out from the darkened room and grabbing me. Needless to say that, having fumbled with the key to open the door, I got up the stairs pretty sharpish!

By the time ‘The Exorcist’ was first shown in this country, in 1974, I’d just turned 14. I’d followed the newspaper reports, which were calling it the scariest film ever, and claiming that people in the US, where it had been in the cinema’s since the end of ’73, had literally jumped out of their seats in terror and ran up the aisles to the exits screaming. There was also much controversy about the subject matter, exorcism being a shadowy religious rite used to expel demons or evil spirits from the possessed. 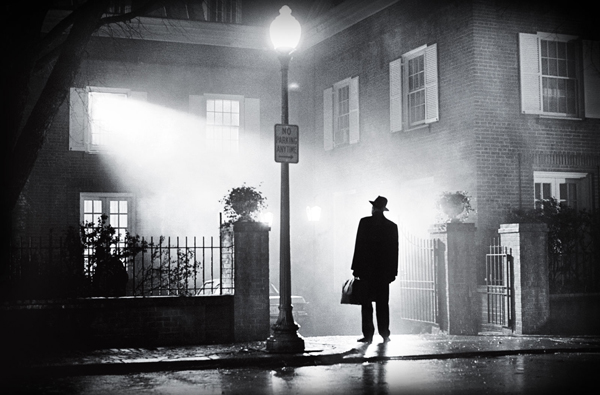 Emboldened by the fact that I’d managed to get into my first X rated film the previous year (see https://blog.gregwilson.co.uk/2010/07/my-first-x/) I decided that, by hook or by crook, I had to get to see this shocker. It was on at the Classic, a local cinema that would soon become part of the Unit 4 chain. I went with my great mate Derek Kelsey, and having prepared ourselves for the probability of trying to somehow get in via the fire exit when they knocked us back for being too young, as we fully expected to happen, my first shock of the night was when, without a hitch, we paid our money and waltzed straight in. A lot of people who’d watched the earlier showing had stayed for a second helping, and there was a real air of anticipation, not to mention trepidation. It was a film that had a lot to live up to, the hype had been colossal, but it delivered with bells on and, by the time I walked back out onto the street, I was suitably shook to the core (although this didn’t stop me going back for repeat viewings during the movie’s run).

The people in the cinema were generally scared shitless. During those points where it became too much for some of them, that nervous laughter which you only hear as a safety valve when the fear impulse becomes acute, was audible, and some people got up and left during the film, unable to handle the supreme tension whipped up by director William Friedkin, which was abruptly punctured with violent outbreaks of demonic rage from Regan, the film’s central character, or to be more precise, the devil inside her.

Dracula, Frankenstein, the Mummy and the Wolfman had nothing on this 12 year old girl whose gradual possession, as the film unfolded, provided the movies with what many would argue was its most menacing monster of all. Regan instantly replaced these traditional bogeymen behind the door at the end of that corridor. 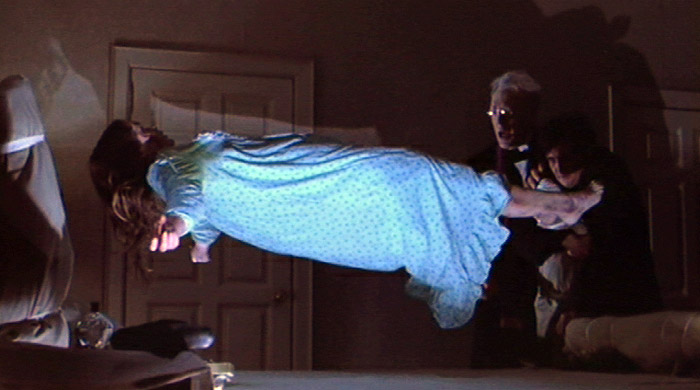 ‘The Exorcist’ was a disturbing experience for many, with some left traumatised for a long time after – I remember chatting to an older lad later that year who admitted to me that since he’d seen it, a few months previous, he was too afraid to sleep in the dark and had to have his light on all night, otherwise he just freaked out. He regretted ever going to see it as it had really affected him in a negative way, and even forced him to pull out of a trip with his school because of this newly acquired fear of things that go bump in the night.

Thankfully it didn’t get so out of hand for me, although when I walked along that second floor corridor I no longer saw the Wolfman jumping out at me, but the altogether more frightening form of Regan. Those stairs, once I’d negotiated the lock and swiftly closed the door behind me, had never felt more like sanctuary.

One part of the film that particularly stayed with me was the dream sequence, where the pendant is falling and the priest, Father Karras, is running towards his mother, who’s about to enter the subway. Somewhere amidst this there was a ghostly white face that burnt its way into my mind, and for years after I’d mention it to people who’d also seen the movie, but they didn’t seem to have a clue what I was on about (the same skeletal face re-appeared during the actual exorcism). It was only some years later, when the film was made available on VHS in the early ’80s (later temporarily withdrawn as a ‘video nasty’), that I was able to stop frame the image to see what it was, and I’d subsequently learn that the ‘in the blink of an eye’ effect was known as a subliminal cut – a once controversial technique which advertisers toyed with as a way of reaching our subconscious without us realising what was happening. 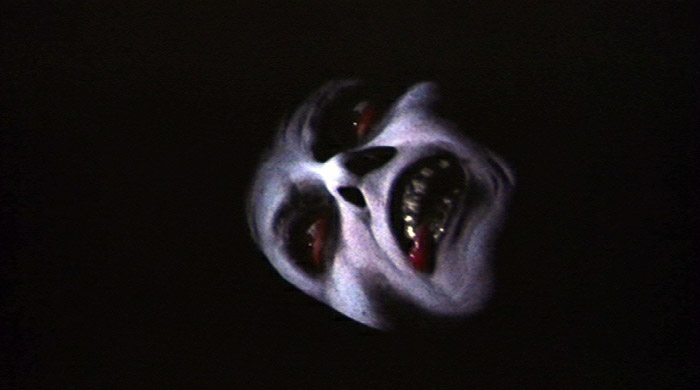 Another was the scene where Father Karras met Regan for the first time. With the demon now in control she’d been strapped to the bed and, whilst the priest converses with the possessor, the bedside draw flies open on its own. Keeping his composure Father Karras asks ‘do that again’, whilst the demon, in a gentle but teasing way, replies ‘in time’, Karras pushes it slightly, ‘no now’, but the demon simply repeats ‘in time’, but in a lower, more sinister tone, which made the hairs on the back of my neck stand on end. Needless to say I was hugely impressed with The Hypnotist, whose early ’90s twisted dance track, ‘Let Us Pray’, featured both ‘in time’s’ as part of a genius juxtaposition of samples that also included Frank Booth (Dennis Hopper) in ‘Blue Velvet’ and Kaa, the sly snake from Disney’s ‘Jungle Book’.

One of the most notorious scenes was left on the cutting room floor – this was the infamous spider-walk sequence, where a contorted Regan comes down the stairs arched backwards on her hands and feet. It’s creepy to the max, just to see the human body in such an unnatural position – too creepy, Friedkin decided, for the credibility of the storyline at this relatively early part of proceedings, before the possession was etched onto Regan’s face via the lacerations that gradually serve to obscure the child and reveal the beast. The spider-walk was one of the scenes added into the 2000 DVD, ‘The Exorcist: The Version You’ve Never Seen’.

Any talk of ‘The Exorcist’ wouldn’t be complete without a mention of its famous theme music, the opening of Mike Oldfield’s ‘Tubular Bells’, the first release on Richard Branson’s Virgin label in 1973. Its association with the film certainly played a key role in its phenomenal success, the album spending a staggering 279 weeks on the UK chart and gaining iconic status in the process.

15 Responses to My Most Scary Movie