By Greg Wilson on March 1, 2011 in Black Culture, CD’s / Digital, Hear, Living To Music, Records, See, The Eighties, The Seventies

This Sunday (March 6th), at 9pm, you’re invited to share a listening session with some likeminded souls, wherever you might be. This can be experienced either alone or communally, and you don’t need to leave the comfort of your own home to participate. Full lowdown here:
https://blog.gregwilson.co.uk/2010/06/living-to-music/

Grace Jones was undoubtedly one of the most cutting-edge artists of the early ’80s – her unique fusion of Reggae and New Wave, coupled with her strikingly stark androgynous image (created in partnership with stylist Jean-Paul Goude), setting her apart as a true cult icon.

Having recorded a trio of Disco influenced albums in the late ’70s, ‘Portfolio’ (1977), ‘Fame’ (1978), and ‘Muse’ (1979), all produced by remix innovator Tom Moulton, she changed her sound and really hit her stride in 1980 with ‘Warm Leatherette’. Drawing on her Jamaican roots she hooked-up with the legendary Reggae rhythm section of Sly Dunbar (drums) and Robbie Shakespeare (bass), plus keyboard ace Wally Badarou (amongst other top line musicians), and with Alex Sadkin and Island Records supremo Chris Blackwell producing (at the famous Compass Point Studios in the Bahamas) the result was a revelation. ‘Warm Leatherette’ spawned her first UK hit, a cover of ‘Private Life’ (originally recorded by The Pretenders) and this strange and somewhat severe looking feline was soon the subject of much fascination.

Including tracks written by Bill Withers, David Bowie & Iggy Pop, Sting and Australian group Flash and The Pan, ‘Nightclubbing’ was named album of the year by NME. The groundbreaking video, ‘A One Man Show’, was mainly made up of tracks from the LP – I blogged about it back in June 2010:
https://blog.gregwilson.co.uk/2010/06/a-one-man-show/

I was massively into Grace Jones throughout her Compass Point period – apart from ‘Warm Leatherette’ and ‘Nightclubbing’, this also included 1982’s ‘Living My Life’. I remember compiling a C90 cassette, which I played to death while I was driving, including tracks from these three albums, plus her epic Disco version of Edith Piaf’s ‘La Vie En Rose’ from ‘Portfolio’ – I wore that tape out for sure. 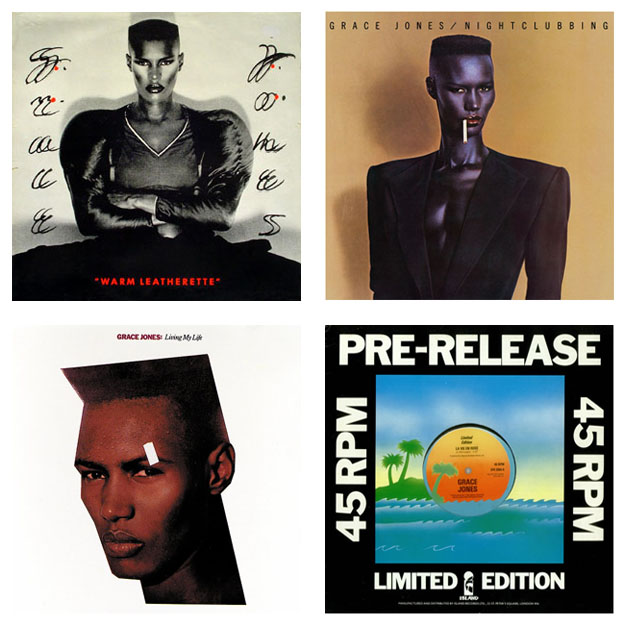 Although many people got into her via 1985’s ‘Slave To The Rhythm’, with quintessential ’80s producer Trevor Horn at the controls, I felt it was a bit of an everything but the kitchen sink overkill – too literal in projecting her larger than life persona (but certainly in keeping with the direction in which she was now moving). A new generation would come to know her not by her records, but via the movies, following her role as Zula, alongside Arnold Schwarzenegger in ‘Conan The Destroyer’ (1984), and later as Bond villain May Day in ‘A View To A Kill’ (1985). There was also small screen notoriety when she bizarrely whacked TV presenter Russell Harty during an interview, whilst her computer generated appearance in a groundbreaking Citroën car advert won acclaim and enhanced the somewhat scary image she’d cultivated (the ad was also utilized in the video for ‘Slave To The Rhythm’):
http://www.youtube.com/watch?v=kdT9oURGtTc

Although she flirted with the mainstream musically, Grace Jones never quite hit the commercial heights and her recordings failed to crack the top 10 of the UK singles chart (although her 1985 best of compilation album ‘Island Life’ did reach number 4). A 1986  re-issue of ‘Pull Up To The Bumper’ coupled with ‘La Vie En Rose’ equalled ‘Slave To The Rhythm’ as her biggest UK single, although they only reached the relatively modest peak of number 12.

Her recording career fizzled out after ‘Inside Story’ (1986) and ‘Bulletproof Heart’ (1989) failed to deliver. Then, almost two decades on, in 2008 she released her tenth studio album ‘Hurricane’, having assembled some of the old Compass Point crew including the key early 80’s ingredients of Dunbar, Shakespeare and Badarou.

I was invited to submit a remix for ‘Williams Blood’, the second single taken from ‘Hurricane’, by Wall Of Sound, the UK dance label that had signed up the album. I had to do it on spec (please refer to http://www.youtube.com/watch?v=xBsGiuAEPXc), which is something I refuse in normal circumstances – however, this was Grace Jones we were talking about, and I liked the track in question, so I made an exception. It was the artist herself who had the final say on which mixes were accepted (and a fair few had had a go), so it was a nice buzz to find out that mine was amongst those chosen. You can hear it at YouTube:
http://www.youtube.com/watch?v=NEJiSyvYymg

‘Nightclubbing’ by Grace Jones is the eighth Living To Music session, with the idea continuing to gain momentum month on month, both in its original context and via related gatherings. Classic Album Sundays, which has caused such a media stir in the past month or so, is lined-up for a trio of festival appearances this summer (more news in due course) and was recently the subject of a BBC Radio 6 news feature:
http://www.bbc.co.uk/6music/news/20110224_islington.shtml