By Greg Wilson on November 24, 2010 in My First / My Favourite, Records, See, The Eighties, The Seventies, TV 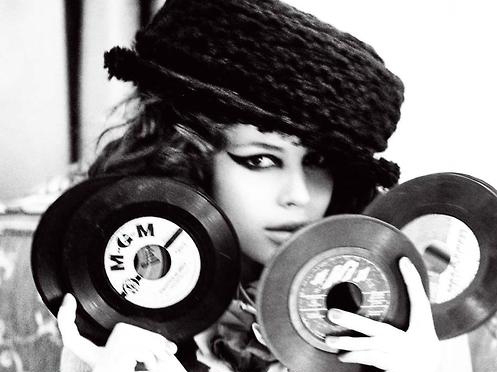 For my 50th blog post, I’m going to return to the ‘My First…’ theme that was so well received (‘My First 12”’ and ‘My First X’, both back in July), and ask an even more obvious question – what was the first record you ever purchased (the one you paid for with your own money, rather than it being bought for you – be it 7”, LP, 12”, cassette, CD or even eight-track)?

I shelled out for the first time in December 1971, when I was 11, buying from an electrical shop called Chester’s, up the road from where I lived on Victoria Rd in New Brighton.

However, before this, I already had access to a pretty strong selection of 7” singles, which came from two sources. The main one, as I’ve mentioned on many occasions, were the records that my brother and sister had bought, which I ‘acquired’ when they moved away from home (my brother going to college, my sister joining the Wrens). These were mainly Soul singles, the majority of which were on the Tamla Motown, Stax and Atlantic labels, with a smattering of Reggae (courtesy of my sister only) on labels like Trojan and Pyramid. My brother, who like many of his generation had left the Mod era behind, growing his hair and embracing the more ‘progressive’ Rock bands, like Led Zeppelin, Cream and Captain Beefheart, hardly noticed me pillage his 7” singles, which he’d pretty much stopped buying, LP’s being his format of choice (years later he’d nostalgically remember these 45s of his youth and ask for them back). I think my sister was just happy to leave her singles with someone who loved them like she did, and who better than her little brother? I’ve since compiled discs for them both, including as many of those tracks that I could remember. Here’s a photo of the three of us taken (in that very month of Dec ’71) at my brother’s 21st birthday party: 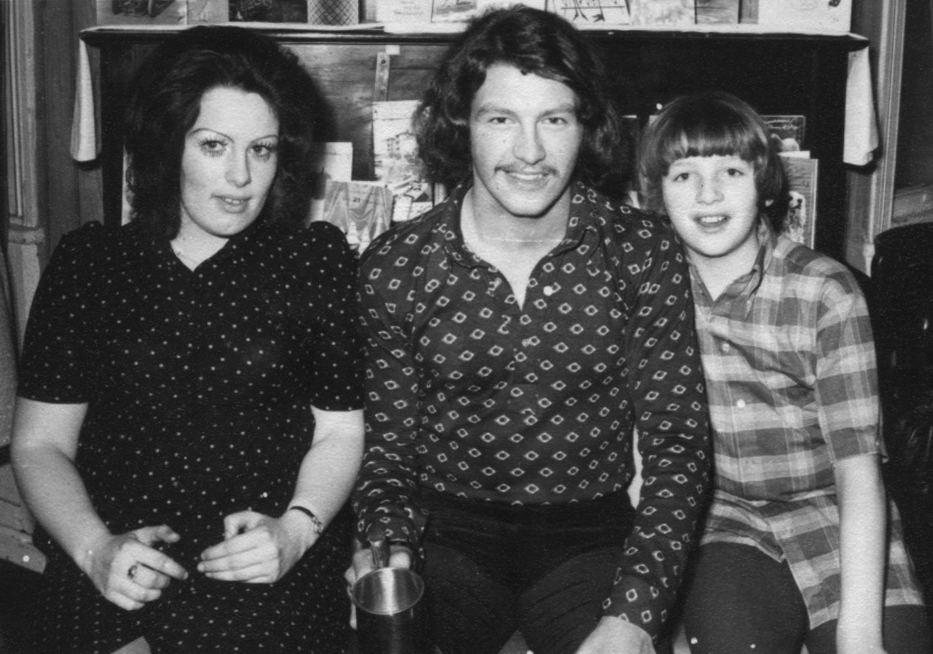 The second source was via the jukebox we had in the pub my parents ran, and which we lived above. My Mum or Dad would often give me half a crown (or it might have been a two bob bit) in the pre-decimalisation days, or 50p after (they could reclaim these coins from the machine when it was emptied), so I could play some tunes. This was generally during the daytime when the pub was quiet and I could sit in the back room, sometimes with a friend, listening to the singles on there. I devoured a lot of music, that neither my brother nor my sister owned, in this way.

Every couple of weeks the ‘Jukebox Man’ would come to the pub to add a few new singles, whilst taking out some old ones, and I’d hang around hoping he’d let me have a couple of the ones he was removing. I’d often bug him for a particular record I wanted, sometimes having to wait a number of visits before he finally replaced the one I was after (an example that springs to mind is Tami Lynn’s ‘I’m Gonna Run Away From You’). The ones I didn’t get my hands on would end up in the cut-price ‘ex-jukebox’ sections, having been sold on to record shops – an ex-jukebox record was easy to identify as the centre had been dinked out, so you needed to use an adapter, or, as we used to call it, a spider, in order to play it.

Had the first record I actually bought been on our jukebox I’d have probably waited on the Jukebox Man to eventually hand it over, but it wasn’t, so I went out and bought it with some money I’d no doubt earned from doing a job for my Dad around the pub. So what was it that brought me to the counter at Chester’s almost 41 years ago, where I happily parted with my hard earned cash? Not a great Soul or classic Reggae track, not even a hooky Pop hit of the day, but a novelty record by a then popular British comedian that would sit at the summit of the chart throughout the majority of Dec ’71. It was (strike up fanfare) Benny Hill with ‘Ernie (The Fastest Milkman In The West)’ (which, as it happens, also turns out to be the first record bought by Bill Brewster, the co-author of the book ‘Last Night A DJ Saved My Life’, who’s the same age as me).

Back in 1971 ‘The Benny Hill Show’ was compulsive viewing in many households – the combination of daft blokes and sexy babes was a particularly potent one, capturing that saucy seaside postcard mentality of the post-war generation, which helped bring about a whole wave of iconic British smut from ‘Carry On…’ to ‘Confessions Of…’. Most of the male viewers, young or old, were particularly partial to Hills Angels, the show’s famous eye candy, whose main purpose was to run around in their skimpys. The programme, of course, had a cult playground following, although I’m sure many parents wouldn’t have tolerated such muck polluting their children’s minds – mine were usually too busy working downstairs in the pub to monitor my own viewing habits, besides, if there was anything on that shouldn’t have been, I could hear them coming up the stairs if I watched from the hallway, giving me ample time to switch off the TV and get to my bedroom undetected. 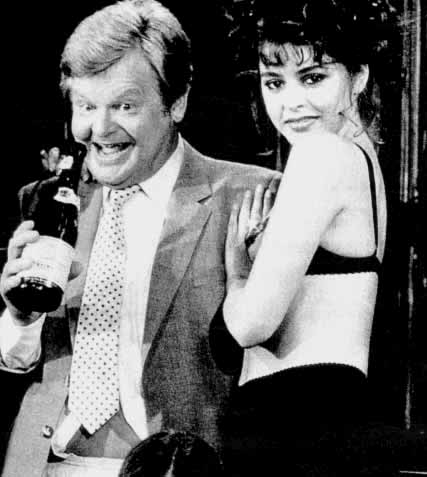 In 1971 ‘The Benny Hill Show’ would have been widely regarded as ‘naughty but nice’ or ‘good harmless fun’, but Hill would later suffer the fate of the politically incorrect, and eventually he’d be dumped in the dustbin of UK TV history (Ben Elton hastening his demise by denouncing him as ‘a dirty old man, tearing the clothes off nubile girls’, which, in turn, prompted The Independent newspaper to describe Elton’s assault on Hill as ‘like watching an elderly uncle being kicked to death by young thugs’). Unapologetically misogynistic, Hill’s sketches, in many respects, were neither big nor clever, so he remains something of a pervy period piece. However, I, and countless others, either laughed our heads off Beavis and Butthead style at his sleazy antics, whilst our eyes popped out at the sight of Hill’s Angels in various states of undress – we were banged to rights adolescent blimp addicts, that’s for sure. 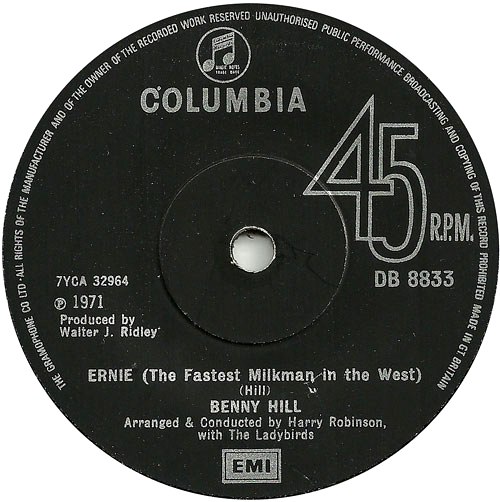 ‘Ernie (The Fastest Milkman In The West)’ caught the popular imagination with its silly story, catchy chorus and innuendo strewn lyrics, and would consequently take its place in the record books as the UK Christmas Number 1 for 1971. If you want to hear what it was that tickled the fancy of this 11 year old schoolboy (plus countless others throughout this country and beyond), here’s the tale of Ernie, Sue, Two-Ton Ted, and, of course, his trusty carthorse Trigger (although I must add that this comes with a ‘you had to be there at the time’ disclaimer):
http://www.youtube.com/watch?v=2mdXLfx0xoQ&feature=related

31 Responses to My First Record