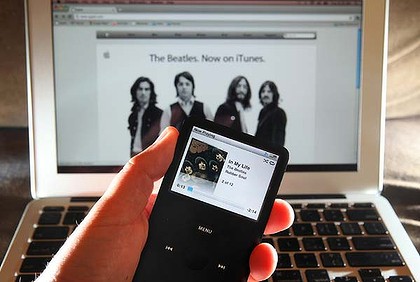 The Beatles.  Now on iTunes.

We are proud to announce that The Beatles are now available for the first time on the iTunes Store.

Starting today, the band’s 13 legendary remastered studio albums with iTunes LPs, the two-volume “Past Masters” compilation and the classic “Red” and “Blue” collections are available for purchase and download on iTunes worldwide as either albums or individual songs. Fans can also get a special digital “Beatles Box Set” featuring the “Live at the Washington Coliseum, 1964” concert film, a worldwide iTunes exclusive which captures the Beatles’ very first US concert.

Beatles fans can stream and view the “Live at the Washington Coliseum, 1964” concert film from iTunes for free for the remainder of this calendar year.

Watch The Beatles Through The Years and the trailer of the Washington Coliseum concert at:
http://beatles.chtah.com/a/tBM4rixAekWpmB8Vv6fDBTOAlO2/home2-1 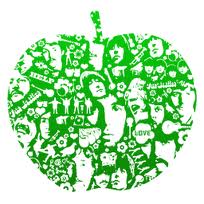 This news caught me completely on the hop. I knew that it was just a matter of time before the catalogue was going to be made available on iTunes, but I wasn’t aware that a date had been set for this – maybe I’ve just been looking in the wrong places (I’ve been touring in the US and Japan during the last three weeks). It just seems that there’s been a lack of fanfare for what is a landmark occasion in the digital realm. There’s obviously a reason for this (when it comes to any new Beatles product, all aspects of its promotion and marketing are very carefully considered), but I’m not quite sure what it is – perhaps it’s all primed to build momentum in the run up to Christmas.

I’ve only just finished reading ‘You Never Give Me Your Money’ by Peter Doggett, which centres on Apple Corps (the company set up by The Beatles) and the many legal tangles that followed its formation in 1968, continuing right up until recent times when Apple Corps and Apple Computer finally resolved their trademark dispute after a near two decade struggle.

The Beatles, and the generation they shaped, have reached old age, but their music continues to rejuvenate into the present, as it always will. It’s all a case of keeping it readily available in the necessary context, which here and now, as we move deeper into the 21st Century, is, like it or not, the digital domain.

The future is upon us – it might not seem important to most people that you can now (legally) download The Beatles, but it’s a significant marker of another generational shift – from vinyl, to compact disc, and now on to digital. The Sixties is sporting a long white beard, but continues to share its wisdom and wonder with those attuned enough to explore and excavate – many of whom, as the years roll on, will never own a CD, let alone an LP or 45.

One Response to Beatles On iTunes