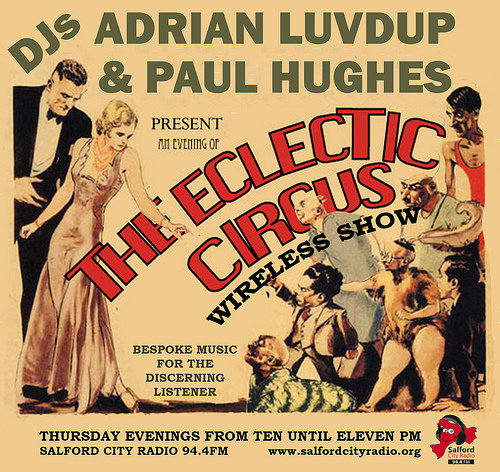 I first came across Adrian Luvdup in the early ’90s, when he was deejaying as one of the Luvdup Twins. I remember going to a night they played at in Liverpool that was promoted by the Girls On Top, Jill & Sonia, whose parties I used to enjoy (having said this I’d been to Most Excellent at The Brickhouse in Manchester prior to this and I’ve since learnt that Adrian was a resident there).  The ‘twins’ were an integral part of that post-Madchester period from which the Chemical Brothers (then students in the city) drew so much inspiration, with DJs like Justin Robertson, Richard Moonboots and Greg Fenton, along with Adrian, Mark, and subsequently Mike Luvdup (aka Balearic Mike), evolving a distinctly Mancunian brew of Balearia, which resonates right through to this day.

Nowadays Adrian is no longer a twin, but still very much Luvdup. He has a new partner, Paul Hughes, formerly part of the Last Rites crew, who operated the pre-party for the late great Electric Chair. The two of them host a Thursday night show (10pm-11pm) for the community station Salford City Radio called ‘The Eclectic Circus’, which is fast gaining cult status in Greater Manchester’s second city and, thanks to the internet, far beyond. What I really like about it is that whilst on the one hand it’s got a great knockabout feel to it, its presenters really know their shit and play some top tunes, so you’ve got that balance between entertaining and informing, which is a compelling combination.

I became aware of it when Adrian emailed me to ask if I’d be up for an interview, which has just been broadcast and has now been uploaded onto their SoundCloud page, where they archive their shows. It’s their second interview, their first being something of a coup – none other than the father of the remix, Tom Moulton.

I loved the Moulton interview, it has a real ease about it and there are loads of nuggets for those, like myself, who are fascinated by the nuances of NYC ’70s Disco culture – it’s great to hear it coming from the horse’s mouth, so to speak, bringing to life some of the stories I’ve previously read about in books about the Disco era, like the wonderful ‘Love Saves The Day’ by Tim Lawrence and Peter Shapiro’s ‘Turn The Beat Around’. The Moulton interview was pure knowledge, made all the more precious for me by the fact that this was being played on a small station in Salford. Tom Moulton enjoyed the encounter so much that he sent the guys an exclusive to play on the show – a truly titanic eighteen minute version of the already epic ‘Papa Was A Rolling Stone’ by The Temptations, which he remixed in 2008, but remains unreleased.

2 Responses to The Eclectic Circus