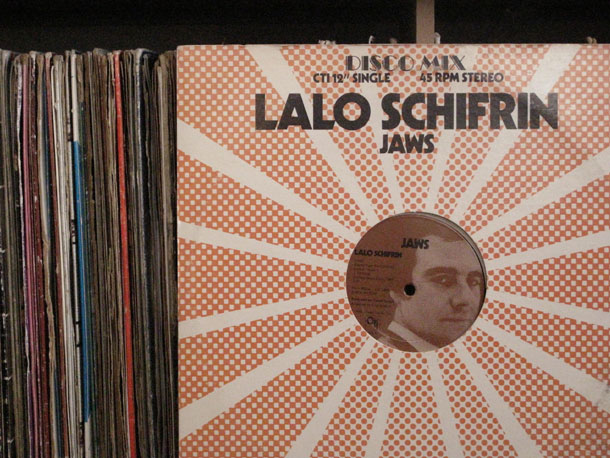 In August ‘76 the postman delivered what I originally thought was an LP, but, on closer inspection, discovered to be a 12” single’ – the first I’d ever seen. It included 3 tracks from the Lalo Schifrin album ‘Black Widow’ – on one side ‘Flamingo’ and ‘Quiet Village’, with the other side taken up by what would become a big UK club track, ‘Jaws’ (Schrifin’s discofied adaptation of the theme music from the 1975 blockbuster movie, which provided director Steven Spielberg with his major breakthrough). It was sent to me by the club promotion company M.I.F.

The first 12” singles were manufactured in the US in 1975, originally as a DJ only format for promotional purposes. They evolved (thanks to remix pioneer, Tom Moulton) as a result of US DJs wanting to play extended versions of Disco tracks, without losing level and sound quality, which happened if you put too much information into the grooves of a 7” (or, in the case of an LP, as one of a number of tracks packed onto a side) – the fact that a 12” single obviously had more space between the grooves than a 7” provided the solution to this problem. The first commercially issued 12” was ‘Ten Percent’ by Double Exposure, released in the US on Salsoul Records in June 1976, with Walter Gibbons providing an epic mix, which is regarded as one of the Disco era’s defining moments.

From a UK perspective, Blues & Soul advertised ‘the first UK released 12” 45 RPM singles’ as ‘Breakaway’ by Ernie Bush c/w ‘Chinese Kung Fu’ by Banzai (both specially remixed by Tom Moulton) and ‘For The Love Of Money’ by The Armada Orchestra c/w ‘Sting Your Jaws’ by Ultrafunk – available October 8th 1976 on their Contempo label. It seems that the ‘Jaws’ 12” I received was a US pressing, although, interestingly, pressed at 45 RPM (the standard speed that UK twelves would run at – US preferring 33 RPM). Following massive club support, it eventually entered the UK pop chart on October 9th, climbing as high as number 14.

Lalo Schifrin, an Argentinian Jazz pianist, composer and arranger, was best known for writing the ‘burning fuse’ theme music for the TV series ‘Mission Impossible’ in the ’60s, whilst his most famous ’70s composition was probably the ‘Theme From Enter The Dragon’, the spectacular Kung Fu movie that finally made Bruce Lee an international star in 1973. He also wrote scores for numerous other movies, including ‘Bullitt’ and ‘Dirty Harry’. ‘Jaws’ was composed by John Williams, and swept the board with Oscar, Grammy and Golden Globe awards for ‘best original score’ (he would become one of the most prolific of all film composers, providing the themes for ‘Star Wars’, ‘Close Encounters Of The Third Kind’, ‘Raiders Of The Lost Ark’, ‘E.T’ and ‘Superman’, amongst many others).

To Kill A Mockingbird
My First X