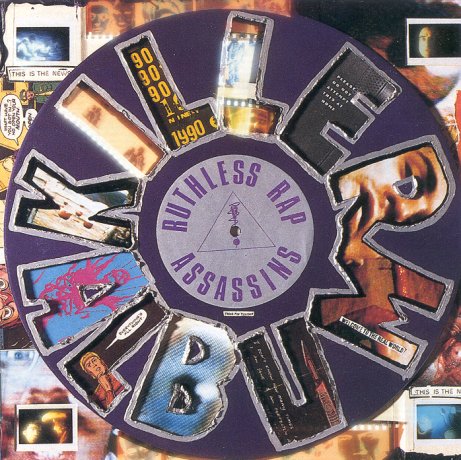 This month marks a big anniversary for me – it’s exactly twenty years since the crew I worked so closely with for over five years, as producer, manager and all round collaborator, saw their debut LP, the ‘Killer Album’, released via EMI.

I doubt most people reading this blog will have heard of it, but it’s a bit of a cult classic – lauded at the time as a seminal British Rap album that broke the mould in many ways. This is illustrated by the distinctive cover (above), which was unlike any previous Hip Hop album sleeve and provided designer, Brian Cannon, with his breakthrough (Cannon would become one of the most successful UK sleeve designers of the ’90s, and is best known for his work with Oasis and The Verve).

The ‘Killer Album’ marked the high point of a period of my life that, although it’s something I’m rarely asked about these days, was hugely significant for me on so many levels. I learnt a lot from Anderson, Carson and Kermit, the Ruthless Rap Assassins, and my time working with them.

Although critically acclaimed throughout the entire music press spectrum, this, unfortunately, didn’t translate to radio, and the crew’s singles never received the necessary plays for them to crossover to the wider record buying public. In the end we had to content ourselves with two minor hits, both of which reached the lowest possible chart position (number 75), resulting in the dubious distinction of being listed in The Guinness Book Of Hit Singles as the most successful ‘least successful British chart artist’ (those who’d spent just one week on the chart at number 75) – we’re the only act in chart history to do this twice!

Kermit (who later went on to form the chart topping band Black Grape, with ex-Happy Monday Shaun Ryder) is a mate from back in the Legend / Broken Glass days. He was the one who brought their demo tape to me just before I moved to London in the mid-’80s. This began an association which lasted until 1992, when the crew split up. There were lots of highs and eventual lows along the way, but it was a journey I wouldn’t have missed, one that’s helped shape my life, and I’m thankful to have shared it with those guys.

So, as you can imagine, it was wonderful for me to see all three Assassins together for the first time in eighteen years, when they all came along to the ‘Community’ night at the Contact Theatre in Manchester, where I deejayed last month.  A few weeks earlier I’d received an email from the former editor of Hip Hop Connection, Andy Cowan, who told me he was putting together a label via Cherry Red Records called Original Dope, to re-issue currently deleted British Hip Hop albums that had a big influence back in the day, and wanted to license the Rap Assassins’ back catalogue for the series.

Things have since moved very quickly, the upshot being that the anniversary will be celebrated in fine style, with the ‘Killer Album’ re-issued in September as the first Original Dope release (catalogue number ODOPE1001) , and the possibility of a couple of live dates to tie-in, one in Manchester, the other in London. I’ll keep you posted on further developments.

Here’s the video for the crew’s best-known track ‘And It Wasn’t A Dream’, listed in Mojo Magazine in March 2006 as one of ‘The 50 Greatest British Tracks Ever’ – full list, in chronological order here:
http://www.rocklistmusic.co.uk/mojo_p2.htm

There’s a Rap Assassins tribute site, which was set up by Mark Balsom in the late ’90s, including music, video and loads of info:
http://www.rapassassins.f9.co.uk/