By Greg Wilson on June 23, 2010 in Black Culture, Hear, Merseyside, See, The Beatles, The Sixties

Filmed by Granada TV in 1964, this is a wonderful piece of footage of Liverpool’s The Chants performing on Merseyside  – there’s something very heartfelt about it, especially the close-ups showing some of the girls swooning over them. The song is ‘I Could Write A Book’ and was written by Rodgers & Hart, originally appearing in the 1940 musical ‘Pal Joey’ (later, in 1957, made into a movie, where it was sung by Frank Sinatra). It would be the second single by The Chants, released on PYE records, and famously given the thumbs up by all four Beatles on the TV show Juke Box Jury (Dec 7th 1963), although even the Fabs’ wholehearted endorsement failed to help it break into the charts.

Whilst lesser lights on the Merseybeat scene had their fifteen minutes in the national spotlight, The Chants would, unfortunately, never have a hit single, despite releasing records throughout the ’60s and on into the ’70s (one of the band members, Eddie Amoo, would however go on to major success in the ’70s as a member of The Real Thing). The sad fact is that, as a black British group in racist times, they never got the breaks they needed, despite support from The Beatles and, for a period, having Brian Epstein manage them.

The night that Joe Ankrah of The Chants first crossed paths with The Beatles, who were supporting Little Richard at The Tower Ballroom in New Brighton (Oct 12th 1962), I’d have been a two year old tucked in bed fast asleep in the very next street, our house at that time, 76 Egerton Street, backing onto the Tower Grounds.  The Beatles’ first single, ‘Love Me Do’, had entered the chart that very week.

Bill Harry, founder of Merseybeat, wrote of the meeting,

“He (Joe) ‘blagged’ his way into Little Richard’s dressing room after the concert and Paul (McCartney) spotted him leaving. Paul wanted to find out who he was and was fascinated when Joe told him about being in an a cappella group. He then gave Joe a note, signed by himself, for the Chants to produce at the Cavern when the Beatles returned from Hamburg. They did this, turning up for one of the lunchtime sessions. They waited for the Beatles to come off stage and ‘waylaid’ them when they left the dressing room as the gig emptied. Paul introduced them to the rest of the group and then beckoned them onto the stage. 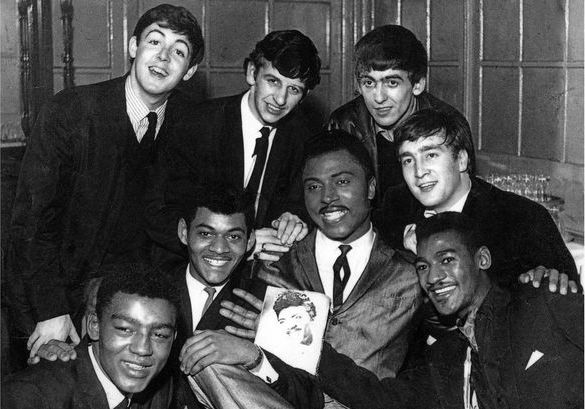 Eddie Amoo recalls, “They went ‘apeshit’ when we started to sing. I can still see George and John racing up to the stage with their mouths stuffed with hot dogs or whatever. The invitation to make our Cavern debut was given as soon as we finished ‘A Thousand Stars’ for them. They insisted we perform that very night. Everything happened completely spontaneously from that point.

On that Cavern debut, the Chants, backed by the Beatles, performed ‘Duke Of Earl’, ‘A Thousand Stars’, ‘16 Candles’ and ‘Come Go With Me’ before an enraptured audience, their set lasting approximately 20 minutes.

“The Beatles themselves offered to back us when we told them we’d never worked with a band before. We then rehearsed four songs with them and then we ran home to tell all and sundry that we had ‘made it’!

When Brian Epstein arrived at the Cavern that night he refused to allow the Beatles to back us, but they collectively persuaded him to change his mind – and when he heard us he invited us to appear on many subsequent appearances with them.”

The Chants by Bill Harry:
http://www.triumphpc.com/mersey-beat/a-z/chants.shtml

One Response to The One That Got Away