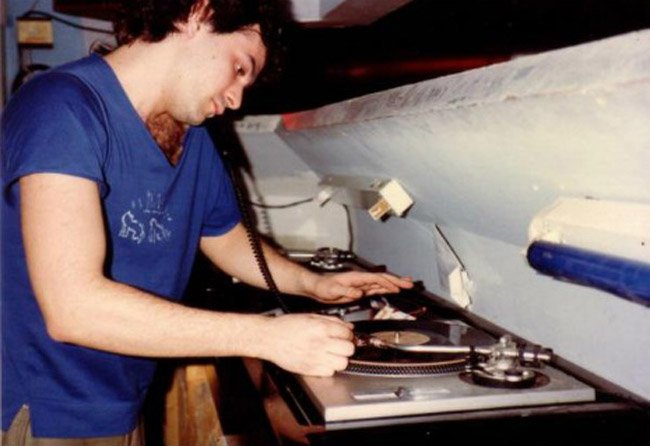 Really shocked to hear that one of the great New York DJs, Mark Kamins, died in Guadalajara, Mexico last Thursday (Feb 14th) following a heart attack – he was only 57. Although our paths nearly crossed almost 30 years ago, it wasn’t until 2007 that I finally got to meet Mark, when he came to see me play in Vienna, where he lived at the time, and then again in Paris in 2009, after he’d moved there. Having returned to his home city, we planned to hook-up in New York 2 years ago, when I was over for Brooklyn’s Mister Saturday Night, but he emailed to inform me that he was on the move again, having landed a new job tutoring on electronic music at a university in Guadalajara.

Back in the early ’80s Mark was resident at Danceteria, a key NYC venue, which was a major inspiration for Manchester’s Haçienda. He was famous for ‘discovering’ Madonna (his one-time girlfriend), who he introduced to Seymour Stein, the owner of Sire Records. He produced Madonna’s debut single, ‘Everybody’ in 1982, and would subsequently work with many artists over the years, including the Beastie Boys, Sinead O’Connor, and David Byrne. 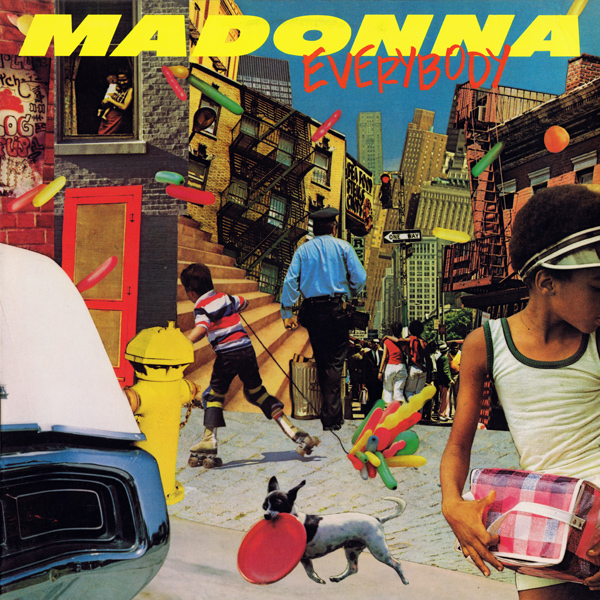 The link between The Haçienda and Danceteria is best illustrated by Manchester’s A Certain Ratio, a Factory band, of course, headlining at the New York club in December 1982, whilst a still unsung Madonna was the support act. 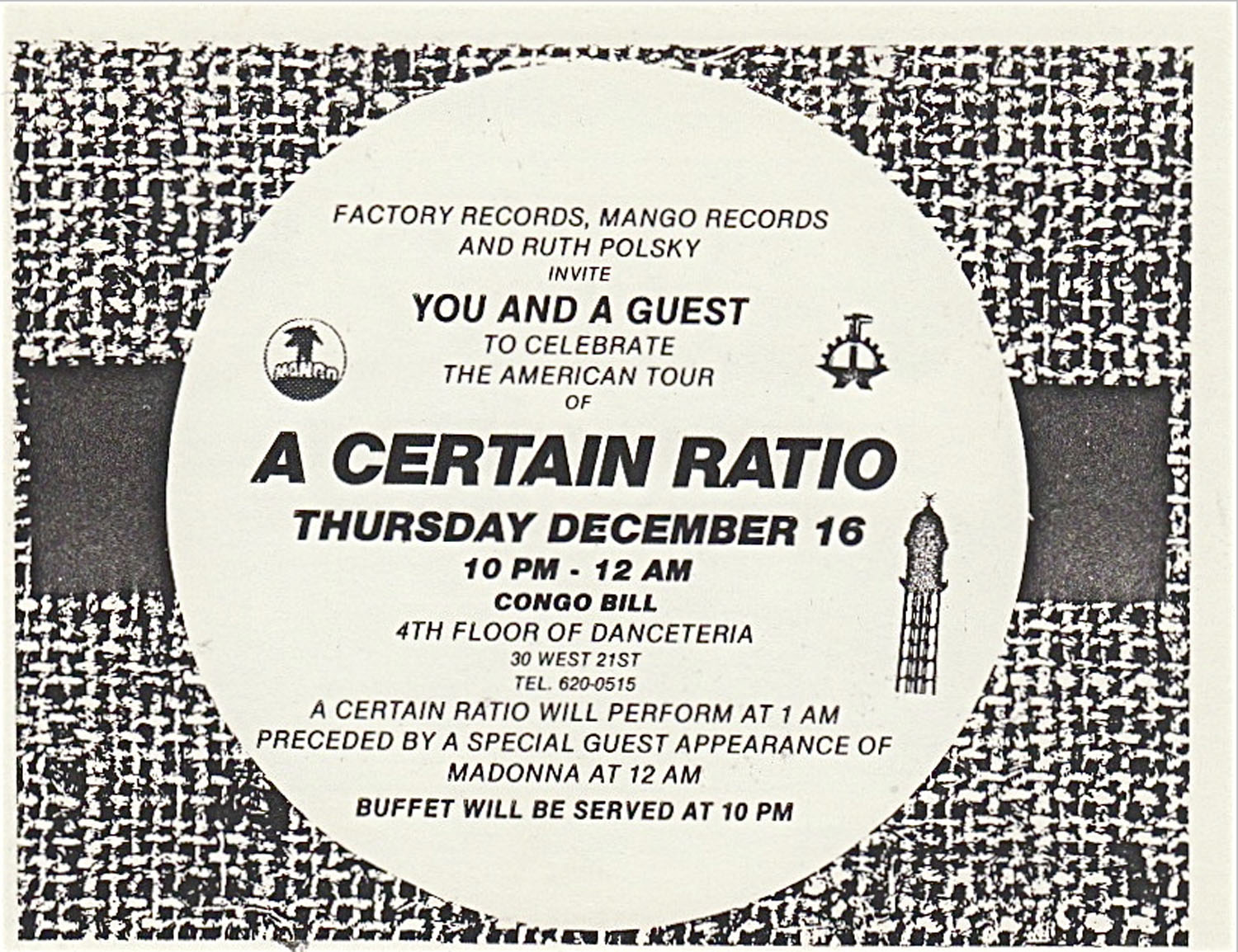 ‘Everybody’ was a track I played at Legend – not the full vocal, but the Dub mix. It was only available on import back then, the artist a complete unknown outside of the hipper NYC club community. It wouldn’t be until late ’83 that Madonna made her commercial breakthrough in the US, by which point she had another DJ boyfriend / collaborator, John ‘Jellybean’ Benitez. In many respects the weight of his association with such an iconic cultural figure has often seen Mark cast as but a stepping stone in the superstar’s career, rather than highlighted his own vital contribution at this critical juncture in the course of dance history, when he was very much one of New York’s DJ elite.

When I started my Friday nights at The Haçienda in August 1983, Mike Pickering, then the club’s booker, and New Order manager Rob Gretton, one of the club’s owners, were always talking in glowing terms about Danceteria and Mark, and it was clear to me that it was the spirit they’d felt there that they most wished to summon in Manchester, Mark combining a mixture of dance and alternative music. It’s testament to Danceteria that Mike and Rob, who had first-hand experience of Paradise Garage, The Loft, The Funhouse etc. held it in such high esteem. Mark had already remixed ‘Love Tempo’, released by Mike’s band Quando Quango on Factory, and would subsequently produce ‘Genius’ / ‘Rebel’ for the band, as well as mixing ‘Atom Rock’ (he also remixed Marcel King’s ‘Reach For Love’ for the label). Mark’s passing will have hit Mike particularly hard, as I know he was both friend and inspiration to the future Haçienda DJ legend.

In last year’s blog post, ‘The Haçienda Disco V Fiasco!’ (www.gregwilson.co.uk/2012/04/the-hacienda-disco-v-fiasco/), I mentioned the proposed DJ exchange that was put to me by Mike Pickering and Rob Gretton, where I’d go to New York for a month and work at Danceteria, whilst Mark came to Manchester. The idea never transpired, but the following year Mark did get to play at The Haçienda, and, in doing so, became the club’s very first US guest DJ, a number of years before such transatlantic bookings became the norm. 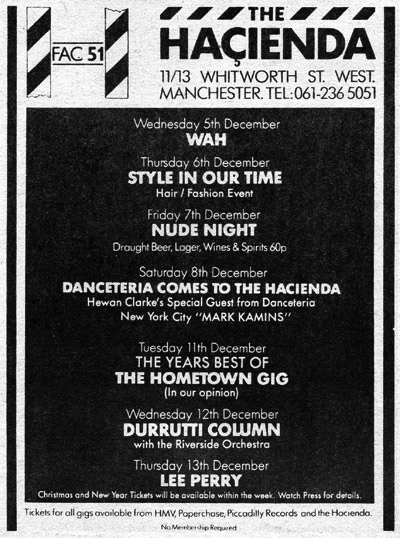 I kept in contact with Mark via email, and he was a big supporter of the blog, sending me regular messages of encouragement – I remember him being particularly complimentary about the How Clubbing Changed The World post and the Random Influences series. We’d touched on the possibility of doing 2 dates together over a weekend at some point, one in Manchester and one in New York, with reference to the exchange idea back in ‘83 – this year, exactly 3 decades on, would have been perfect, but it just wasn’t meant to be. His final email to me, during the Christmas holidays, was ever positive – he wrote; “Have a great new year my man. Sending lots of love. Keep on…..”

It’s such a shame that he now won’t be around in person for the publication of ‘Life and Death on the New York Dance Floor’, Tim Lawrence’s forthcoming book about NY club culture between those crucial hybrid years of 1980-83, for which Mark was a key interviewee. However, he’ll certainly be around in spirit, the book serving to enhance his legacy and bring his name to a new generation of enthusiasts. 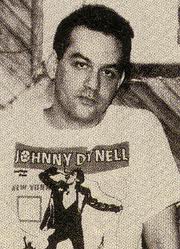 *thanks to Winston Reed for giving me a heads up on this 20 minute ‘Vanished Venues’ piece about Danceteria: http://soundcheck.wnyc.org/2010/oct/19/vanished-venues-danceteria/

How Do You Listen To Music?
Confessions Of A Teenage DJ