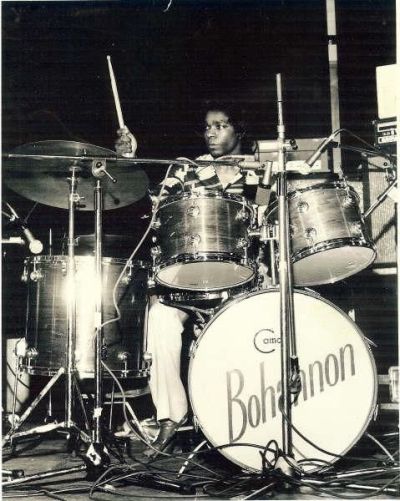 Following the recent passing of Manu Dibango and Bill Withers, another black music icon, Hamilton Bohannon, died last Friday aged 78 – the cause of death, at time of writing, still unknown.

Hailing from Georgia, the same state James Brown grew up in, Hamilton Bohannon, a formidable drummer, developed his own groove that informed Disco, but with the Funk sensibilities laid out by his predecessor. Born in 1942, he learned drums at school playing in a number of bands, including a brief stint with a young Jimi Hendrix whilst at college in Atlanta.

In 1964, he joined 13-year-old Stevie Wonder as tour drummer. He subsequently moved to Detroit in 1967, working as a live musician for the illustrious Motown Records. He formed his own touring unit, ‘Bohannon & The Motown Sound’ and backed some of the company’s hallowed acts – Marvin Gaye, The Temptations, Smokey Robinson, Diana Ross & The Supremes, and The Four Tops included.

When Motown set its sights on a new Los Angeles HQ, Bohannon stayed in Detroit, putting his own band together and signing to New York’s Dakar label, releasing his debut album ‘Stop & Go’ in 1973, followed by ‘Keep On Dancin’’ (1974), which contained the single ‘South African Man’. It was his first chart success, although not in his home country, but over in the UK where it peaked at #22.

In 1975 he breached the UK top 10 with ‘Disco Stomp’, whilst debuting on the US Disco chart, climbing to #11. Later that year he finally penetrated the US R&B top 40, with ‘Foot Stompin’ Music’ scraping in at #39, whilst completing a hat-trick of UK top 30 hits. The track would also provide his highest US Disco position, reaching #3.

His lack of R&B chart success is surprising, his only top 10 entry his most celebrated recording, the Mercury released ‘Let’s Start The Dance’ (1978). He’d place a trio of tracks in the US Disco Top 20 between 1976-77 – ‘Bohannon’s Beat’, ‘Dance Your Ass Off’ and ‘Andrea’ – before releasing his defining track. Driven by the fiery vocal of former Motown artist Carolyn Crawford, ‘Let’s Start The Dance’ is a rhythmic force, pressing the groove into your body with all its might. Its modest chart placings, #9 R&B, #7 Disco, #56 UK is unreflective of its enduring popularity.

Signing to MCA Records in 1984, further success would be elusive with dance music taking an electronic direction. In 2017 a street in his hometown, Newnan, was named Bohannon Drive in his honour.

Bill Withers
Last Festival ‘Til When?