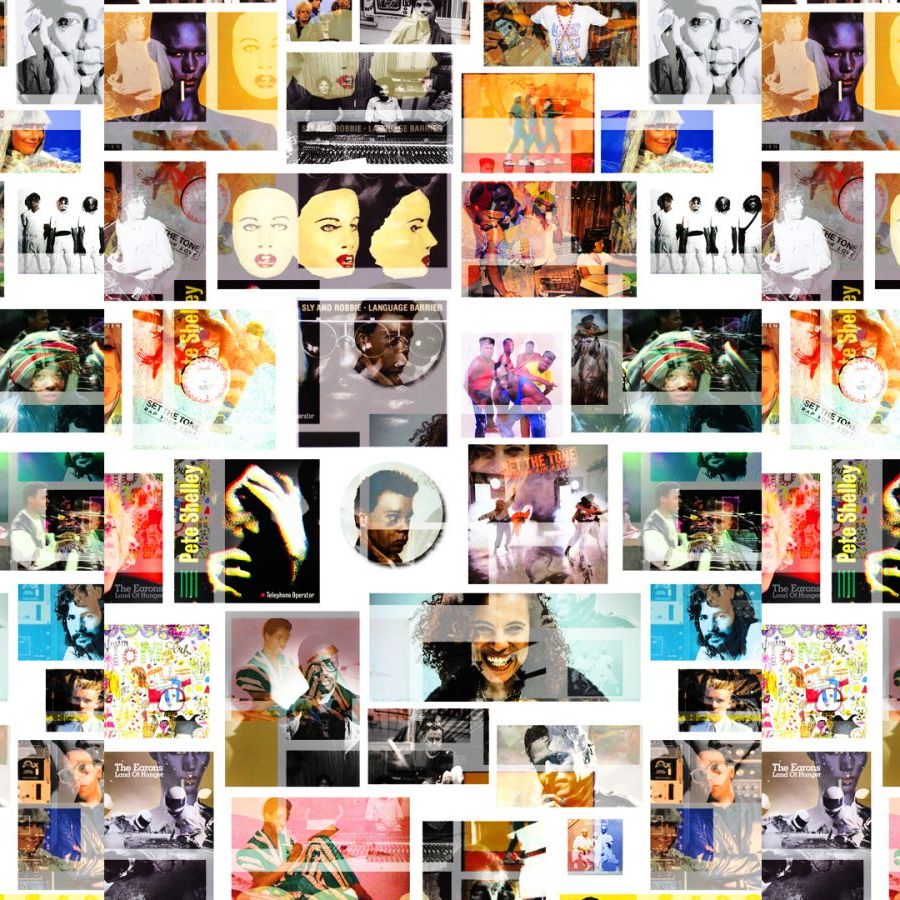 Trevor Jackson is something of a cultural maven whose thirty-plus years in the more underground corridors of the music industry has seen him fulfil a number of catalytic roles – starting off as a graphic designer at Champion Records in the late-‘80s, responsible for the S-Express ‘Theme From S-Express’ and Raze ‘Break 4 Love’ sleeves, amongst many other subsequently. Later a recording artist in his own right (Playgroup), a record company owner (Output) and, of course, a DJ, he continues to do his thing in his own inimitable way.

In 2005, when my first Credit To The Edit album was issued, Trevor kindly provided one of the quotes Tirk utilized as part of their promotional campaign for the release. I was surprised that he knew who I was, let alone cite me as an inspiration. Around that time he was regarded as one of the main players on what was then dubbed the Electroclash scene, which took its main inspiration from New York’s Punk-Funk and the British/European electronic bands of the wonderfully hybrid early-‘80s.

It was this era that provided the main source of material for an idea he pitched to Island Records, or rather their parent company Universal Music Group. Island, which was born in Jamaica back in 1959, with the visionary Chris Blackwell at the helm, was, following it’s re-location to London, the quintessential UK independent label, releasing a wealth of music both on the main label, plus R&B off-shoot, Sue, and later the essential Reggae label Trojan. Island would have its big acts, scoring regular chart hits, but it would also support more nominal artists – the label’s roster containing all manner of interesting, exotic and esoteric artists.

Trevor’s idea was a compilation series that combined both known and obscure mostly early-‘80s releases on Island and its subsidiary labels, generally using dubs or alternative mixes, many of which have never made it to CD / digital. Such a compilation seems totally within the ethos of the Island of Chris Blackwell, but the music business is a very different realm these days and the project would be viewed as but a marginal issue by Universal, the music juggernaut that nowadays administers Island’s catalogue, so the idea was unfortunately rejected.

So, as not to totally waste this supreme effort, he compiled 322 minutes of music to SoundCloud, under the title; ‘Trevor Jackson Selects Island’, featuring a plethora of artists including Will Powers, Grace Jones, Malcom McLaren & The Worlds Famous Supreme Team, Gwen Guthrie, Art Of Noise, Warp 9, David Joseph, Ryuichi Sakamoto and many more. The upload really caught the imagination and it racked up over 5000 plays in no time, but no sooner was it up than it had been taken down, having infringed Universal’s copyright on the platform. As a consequence, it now resides at Mixcloud, which has a different relationship with the majors, renamed ‘Trevor Jackson – Island Records Extra Special’:

There should be a place for the obscure and oddity, but sadly, so much music and so many mixes sit on a shelf somewhere, the original master tapes decaying, the contents never having been converted to digital, let alone been made available. The record company’s role is to exploit the product that comes under its stewardship, for this is the only way the artists can earn royalties from it, but instead it rots away, as there’s always something more important to do than digitise something that, in the greater scheme of things, is only going to generate minute income.

It’s no secret that, for many years, master tapes have been lost, destroyed or allowed to decay. Much of the content of dance compilations covering the ‘70s and ‘80s released during recent decades has been sourced from vinyl, as the master tapes were unavailable. It would seem that in this digital age that it should be a prerequisite that all music under a company’s ownership should be available to buy digitally, including all mixes and variants – there’s no physical product here, so it would hardly need major investment. This should be the very least a label does for the artists under its jurisdiction, if not ownership should surely revert to these artists, or their estates.

I’m often disappointed to find that dub or instrumental mixes of early-‘80s tracks, which were the main versions in the underground clubs at the time, haven’t been digitised – so the only format available is often the inferior vocal. With this in mind I’m constantly hearing DJs nowadays playing ‘the wrong’ version of some cult-classic or other, oblivious to the fact that all real fun was to be found on the other side of the vinyl. 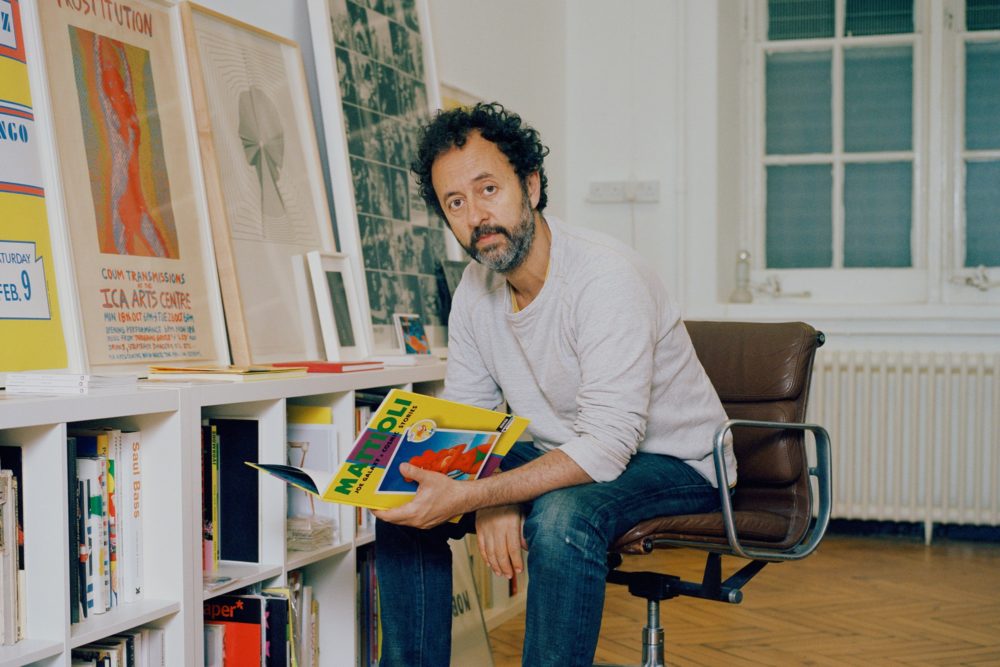 It’s such a shame that when a specialist like Trevor Jackson helps expose these hidden corners, especially with such a culturally important label, that he isn’t encouraged to bring his expertise to bear in helping monetise this music, which currently has little value, apart from in the second-hand vinyl market, which only benefits record dealers and not the artists whose work this originally was.

At least these versions can be appreciated now via Mixcloud, but CD/digital would have been really nice. Listening through, it was great to re-visit some tracks and discover others I’d missed at the time.

One track that pretty much stopped me in my tracks is something I hadn’t heard for so long that I didn’t immediately recognise it. It was only when I’d realised that the effect I was listening to sounded like a DJ switching between 2 copies of the same record that I realised what it was. It was me doing exactly that, but back in 1983, on the first ever record I was involved with – a promo only ‘instrumental mix’ of ‘Heaven Sent’ by Paul Haig, the official version having been released on Les Disques Du Crépuscule, the Belgium label licensed to Island. 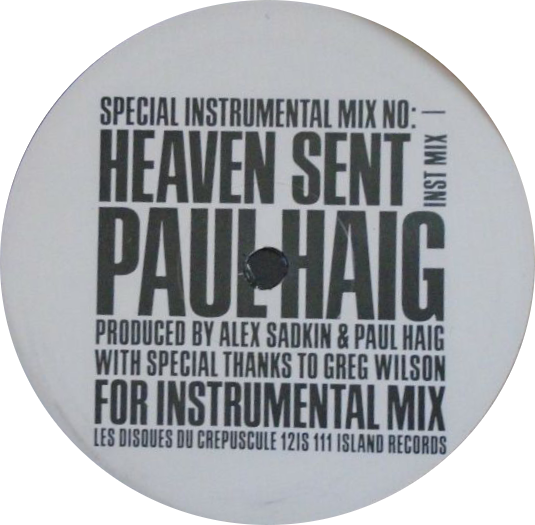 I have to admit that I’ve always been slightly embarrassed about this mix, as you often are with your first try at anything, and especially because it wasn’t a mix (I didn’t have access to the multitrack, as this suggested), but an edit, which I put together using 2 copies of the Paul Haig 12” and a razor blade. It was, to the best of my knowledge, the first UK re-edit on vinyl – people had edited to shorten a track previously, providing radio versions, but this was aimed at DJs (I even have copies of the reaction reports they all sent back somewhere).

I can hear its obvious clumsiness, it was all thrown together in a couple of hours, but in the context of Trevor’s mix, it didn’t offend me so much, but fitted in nicely amongst all the other mutated grooves he’d picked out of the past. This all came about following my appearance on The Tube, the Channel 4 music show, in Feb ’83, when I’d demonstrated mixing using 2 copies of David Joseph’s ‘You Can’t Hide (Your Love From Me)’. It was on the back of this that the DJ promo department at Island, David Joseph’s label, approached me regarding the Paul Haig edit.

That it was included was a big surprise, not least because this obscurity doesn’t even have an entry in Discogs, which illustrates just how deep Trevor has delved into this area. I never even played it myself at the time – being a black music specialist, its more alternative sound just didn’t fit my vibe. I’d have preferred to have worked on something like the David Joseph track, but Larry Levan was busy remixing that in New York, so it was a case of beggars can’t be choosers, at least if I wanted to make a break into this then still relatively new arena of remixers, pretty much exclusively US-based at this point. I remember being disappointed that I wasn’t being asked to go into a studio, but put this together at home to keep costs to a minimum, and also that it wasn’t a full release, but a promo, with a few hundred copies pressed exclusively for their DJ mailing list. Still, it was a start, albeit a slow one that wouldn’t gain momentum until the following year with the ‘UK Electro’ album.

Trevor continues to work as an audio/visual artist and his fortnightly shows on NTS Radio are regularly archived at Mixcloud.