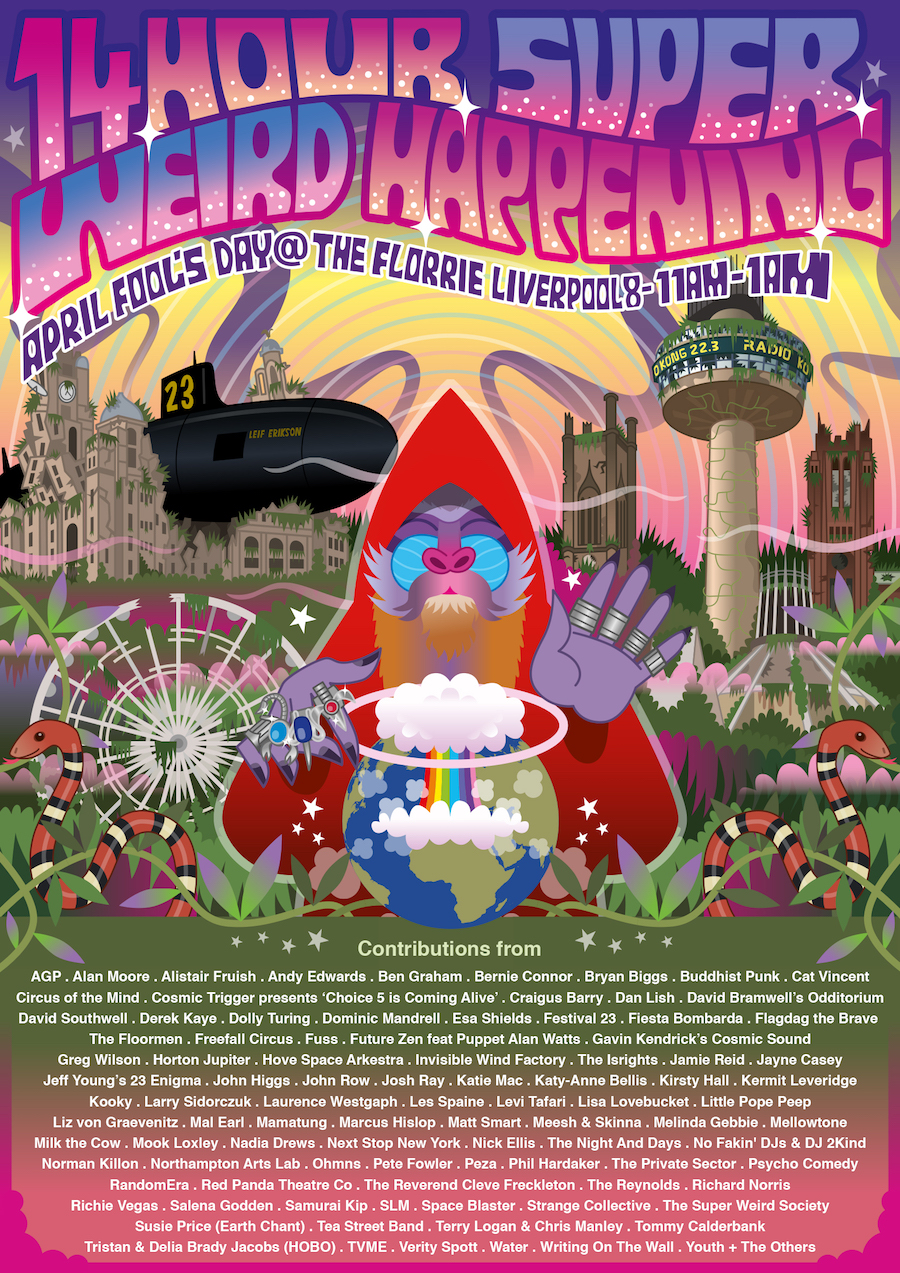 On April Fools’ Day our record label, Super Weird Substance, is hosting its most ambitious event to date – a 14 hour long Happening that takes over The Florrie, a stunning Grade II Victorian community heritage venue in Liverpool.

Kicking off at 11am, there’ll be contributions from a literal plethora of artists, the event including art installations, exhibitions, panel discussions, spoken word, live art, acrobats, musicians, live bands, DJs and who knows what. Everyone participating is giving their time and energy free of charge – all profits will go to The Florrie, which is in constant need of funds, surviving largely through the passion of those who run it.

It is, in effect, a one-day festival, with all the different spaces in the building put to creative use. The intention of the Happening is to bring together the various individuals and collectives whose paths we’ve crossed since launching Super Weird Substance on April Fools’ Day 2014 – our own fool’s leap. 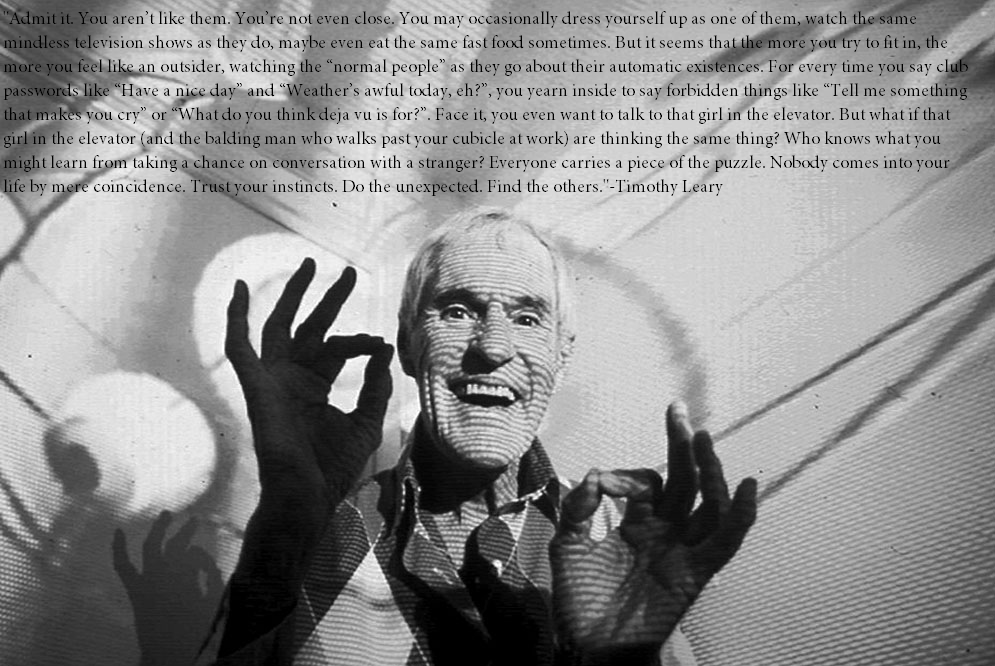 Further to this, the Happening is all about connecting previously disparate groups and individuals – as psychedelic guru Timothy Leary once put it, finding ‘the others’. The fact that everyone has entered into the spirit of things in such a positive manner makes this a very unique and remarkable gathering indeed. At its basis, it’s all about old friends and new celebrating their connectivity, and we hope that the legacy of this event will be the interactions and ideas explored subsequent to what happens on April 1st.

We’re providing the environment and the context, but, in many respects, it’s as much about what people take away with them as what actually takes place on the day. 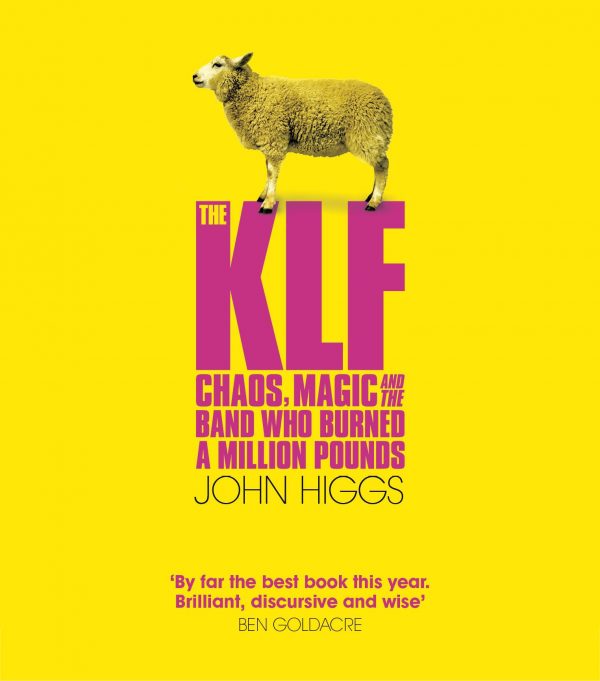 The central connector has been John Higgs, via his book ‘The KLF: Chaos, Magic And The Band Who Burned A Million Pounds’, which highlights Carl Jung’s ‘Pool Of Life’ dream in 1927, and all the mythos that’s subsequently tumbled out of it. With this in mind, the location for this Happening could only be Liverpool.

Liverpool is on a roll – as I wrote a few years ago ‘it’s crystal clear to anyone who spends some time in the city that things are on the up and up. The planets are aligning and Liverpool’s star is in the ascendancy – it’s time for artists to be brave and bold, pushing against the same old to create a new approach that chimes with the times in which we live.’

Jimmy Cauty and Bill Drummond’s artistic boldness and bravery is now the stuff of legend. Having left The KLF behind in 1992, along with their Brit statuette, they burnt the loot on the Isle Of Jura as the K Foundation in 1994; later writing a contract on a car, which they then rolled off a cliff, declaring not to speak about its torching for 23 years.

August 23rd 2017 is 23 years on from the Jura combustion, and on January 5th a poster appeared online declaring ‘2017: What The Fuck Is Going On’ and concluding with the intriguing news that ‘The Justified Ancients Of Mu Mu (the earliest Drummond / Cauty collaboration – the name, adapted from Robert Shea & Robert Anton Wilson’s’ 1975 Discordian classic, ‘The Illuminatus! Trilogy’) are currently at work in their light industrial unit’ and that ‘this work will not be made public until the 23rd of August 2017.’

This was followed by a further poster announcement on Feb 6th; K2 Plant Hire present 2023 – a trilogy by The Justified Ancients Of Mu Mu’, whilst publishers Faber & Faber clarify this as a book release, which they pitched as “utopian costume drama, set in the near future, written in the recent past”.

Only last week, on March 6th, a third poster appeared proclaiming that ‘The Justified Ancients Of Mu Mu will be unearthing aspects of the 2023 trilogy across Liverpool from 00.23 on the 23rd to 23.23 on the 27th Aug 2017’. Once again, it could only be Liverpool.

The Florrie was Jimmy Cauty’s ADP Riot Tour stop-off in Liverpool last year, whilst Jamie Reid, best-known for his seminal Sex Pistols artwork, chose the venue for his recent Casting Seeds exhibition. The moment I saw the place it shouted ‘HAPPENING’ at me. 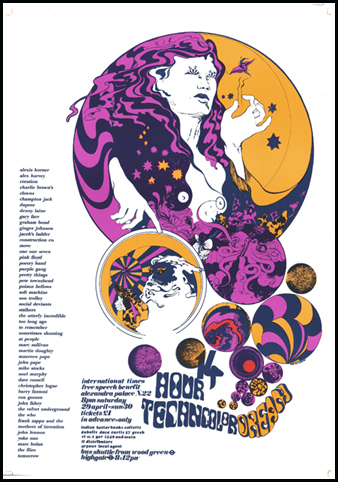 Almost fifty years on from when the International Times unleashed The 14 Hour Technicolor Dream, a seismic countercultural event at the Alexandra Palace in London on April 29th 1967, the 14 Hour Super Weird Happening hopes to evoke the spirit of the era and its fabled ‘summer of love’.

Once declared ‘the centre of the creative universe’ by beat poet Allen Ginsberg, Liverpool has always been a magnet for inspired mavericks, giving birth to some rich artistic expression as a result. With this in mind, the Happening will explore some key area’s of the city’s cultural heritage.

Jayne Casey, a leading cultural figure in the city since her late ’70s days with Big In Japan, local DJ and musical sage Bernie Connor, along the aforementioned writer John Higgs, will make up the panel exploring the modern mythos surrounding Carl Jung, Mathew Street and the Eric’s era, including the catalytic contribution of Roger Eagle, whilst 1967 will be revisited in an examination of this crucial year’s impact on subsequent culture (panelists listed later in piece), whilst we’ll look at how things played out from a local perspective. 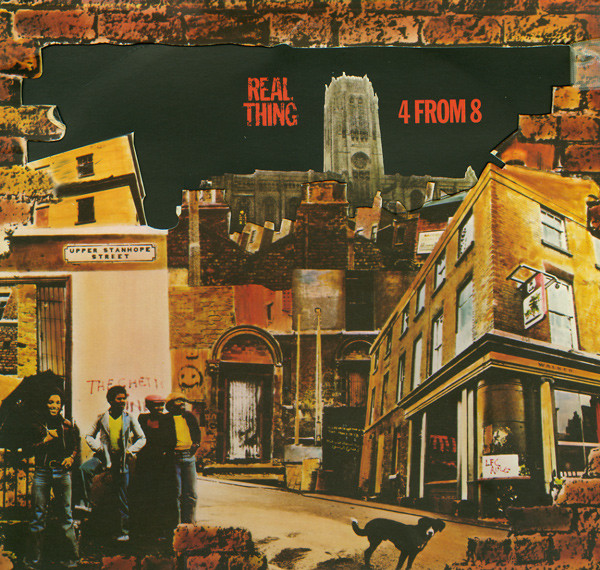 As a port city Liverpool has always been outward-looking and when black American music first landed on its shores it really resonated. This significant link will be highlighted during the day, plus we’ll shine a light on the city’s own, sometimes forgotten black music legacy.

Liverpool 8, the district in which The Florrie is located, has deep roots with Liverpool’s black community, and the discussion panel will consist of British black history specialist Laurence Westgaph, dub poet Levi Tafari and Les Spaine, a long-time friend, and an aspirational figure when I was starting out as a DJ – Les holding court at one of Liverpool’s all-time classic clubs, The Timepiece, back in the ’70s, which I wrote about in a recent edition of ‘Discotheque Archives’, the monthly column I write for DJ Mag:
https://djmag.com/features/greg-wilsons-discotheque-archives-11 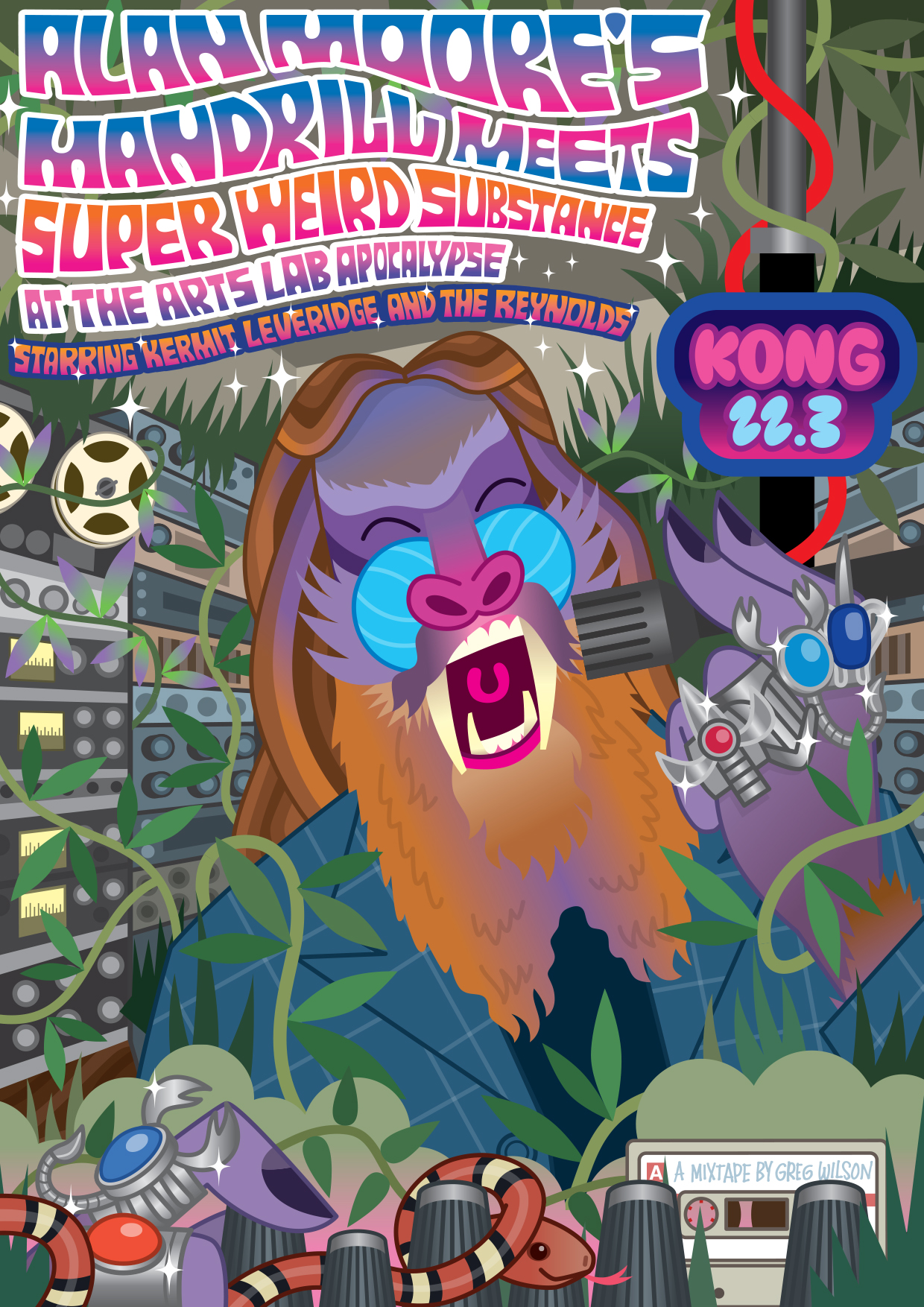 Special thanks to the very brilliant Pete Fowler who went above and beyond in creating the artwork not only for the event poster, but also the mixtape, ‘Alan Moore’s Mandrill Meets Super Weird Substance At The Arts Lab Apocalypse’. For the Florrie poster our hooded man image becomes the hooded mandrill. ‘Mandrillifesto’ has certainly informed a lot of our thinking of late, the mixtape the most enjoyable thing I’ve worked on in years – Kermit Leveridge and The Reynolds blowing me away with their rhythmic and melodic vocal weaving, whilst Alan joined in the fun and games adding his killer KONG 22.3 Mandrill links. More about the mixtape here:
http://www.superweirdsubstance.com/alan-moore-mandrill-meets-super-weird-substance-arts-lab-apocalypse/

After a decade in the making, Alan Moore’s momentous novel ‘Jerusalem’, one of the 10 longest in the English language, was finally published in September 2016. Set within the Boroughs of Northampton, it’s a book like no other, scanning the history of the area right back to medieval times, and taking in a wealth of local characters, some famous, others more obscure. The book has been described as a ‘working class mythology’, its main focus on the everyday people of the town, not least Alan’s own family. Alan is, of course, famous for his comics, including classics like ‘Watchmen’, ‘V For Vendetta’, ‘From Hell’ and ‘League Of Extraordinary Gentlemen’. His body of work is truly vast and, for me and many others, he’s the greatest writer of our age – the one who makes most sense of the world around us, not least with regards to recent developments. 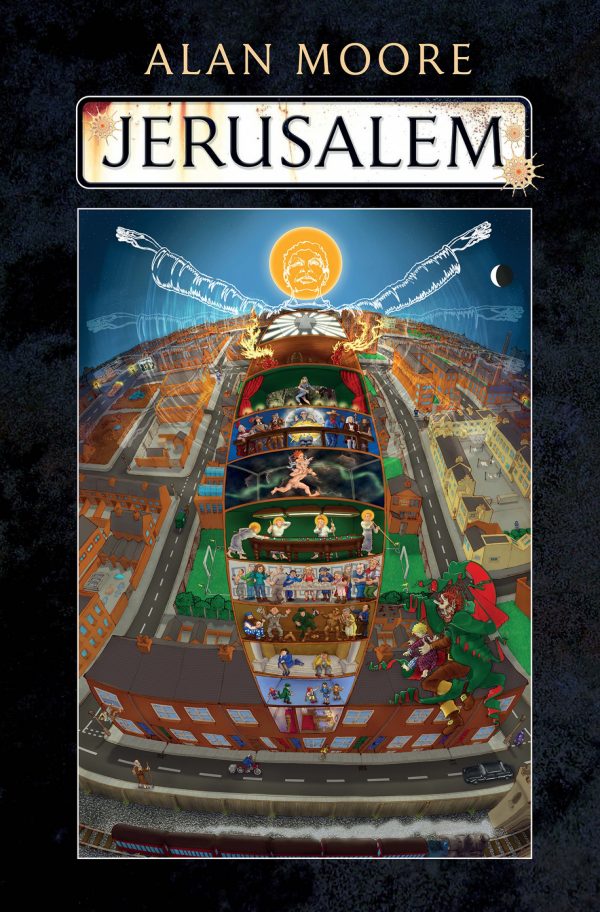 Completing ‘Jerusalem’ was a bittersweet experience – having worked my way through its 1200 odd pages, I didn’t want it to end. The first thought on having read it was the desire to read it all over again, the incredible detail within its pages becoming more apparent with each chapter.

So, to have Alan as our special guest at the Happening is quite something, especially given he’s rarely ventured out of Northampton during recent times. We’re also thrilled to have Alan’s wife, the artist Melinda Gebbie, contributing – she’ll be exhibiting some of her work, whilst appearing on our 1967 panel along with Bryan Biggs, the artistic director at Liverpool’s Bluecoat, which is currently celebrating its 300th anniversary, and DJ Norman Killon, who was at Liverpool’s famous R&B club, The Sink (now The Magnet) in the ‘60s. Melinda will bring some San Franciscan wisdom to the discussion, coming from the city at the centre of the hippie universe during the hallowed ‘summer of love’. We’ll also hear John Row’s ode to the 14 Hour Technicolour Dream, which he attended 50 years ago, on his 20th birthday.

The event begins in the morning at 11am, and everyone arriving during that first hour for our ‘parade of fools’ will receive a gift. The final batch of tickets are now on sale via Skiddle, but I need to warn you that these will be gone in no time, so, if you want to be part of the day, don’t delay. 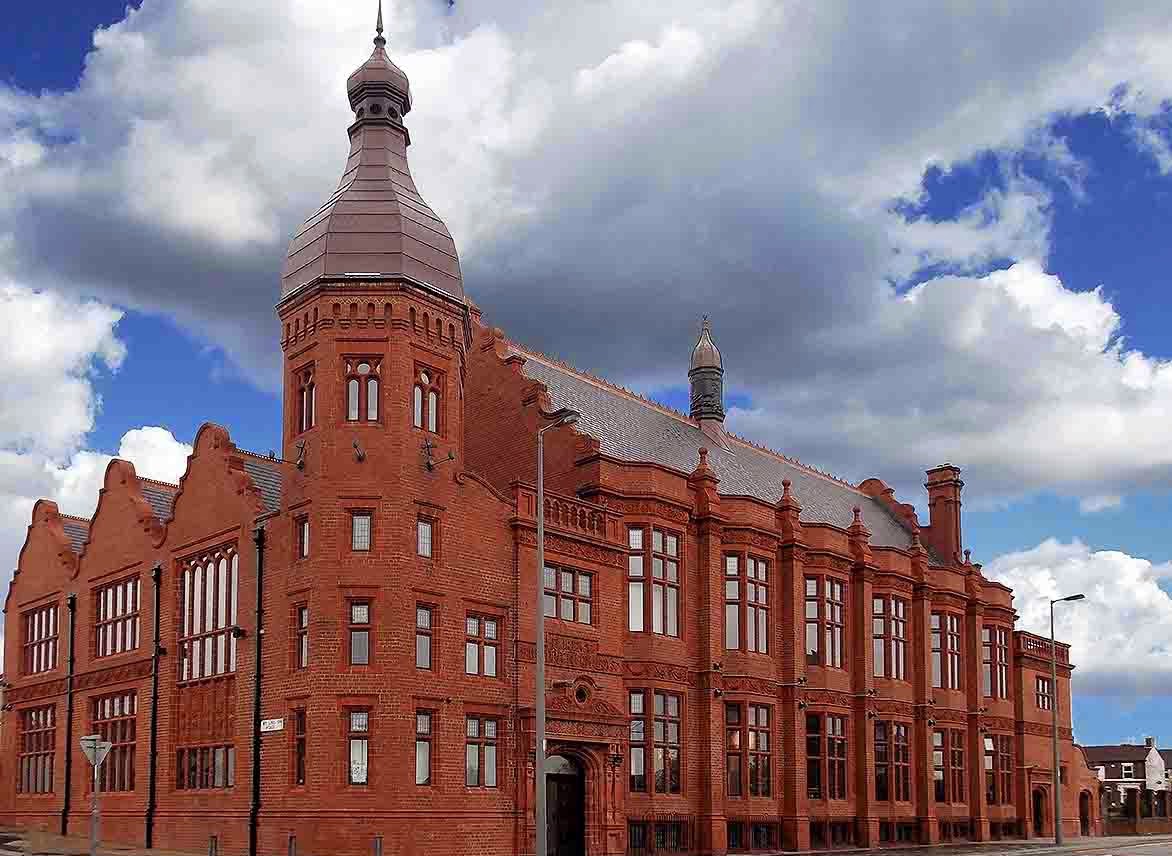 The panel discussions and spoken word will take place between midday and 6pm, the emphasis switching to more or a party vibe after Jamie Reid and Alan Moore have been presented by another legendary figure, record producer Youth, in the Main Hall. Local favourites, The Tea Street Band will then perform live before the Super Weird Society, and I’ll be rounding things off.

There are far too many people appearing to list them all in this post – all contributors are listed on the poster. There will be DJs, including Richard Norris, Derek Kaye and Peza playing in various spaces throughout the building, and a local bands room enhancing the live performance aspect of proceedings.

Special mention must be made of Festival 23, Cosmic Trigger, Next Stop New York, No Fakin’, The Odditorium, Arts Lab Northampton, The Private Sector, Invisible Wind Factory and Fiesta Bombarda for their invaluable input, as well as Nicko Otaegui, Sam Garlick and Paula McMahon who’ve been busy working behind the scenes, and, of course, Anne, Tommy, Timo, Karen and all the crew at The Florrie, plus Josh, Tracey and Jill from the Super Weird side of things. 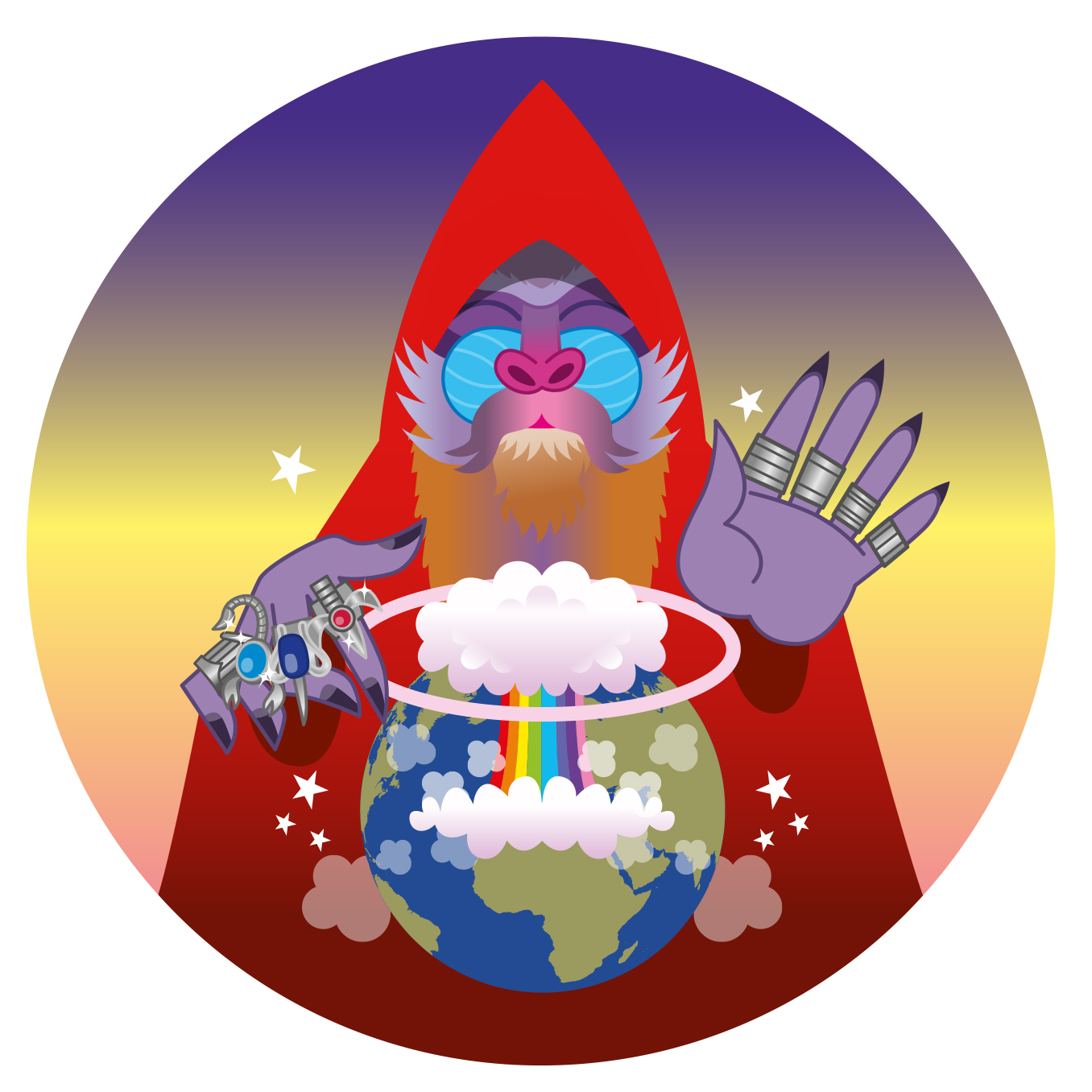