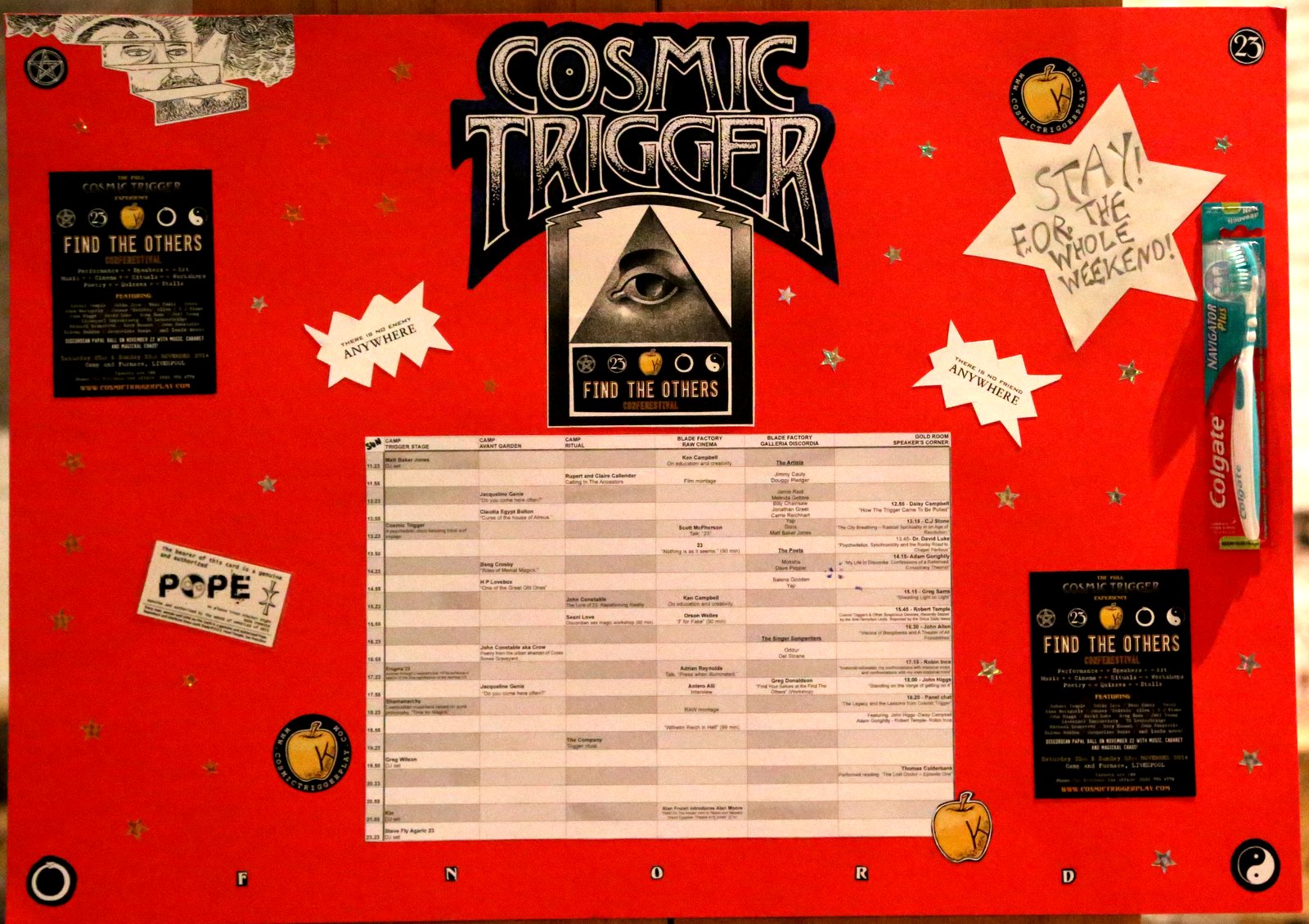 First up I have to say that fortune favours the brave, and Daisy Eris Campbell and her brilliant cast and production crew are destined, I’ve no doubt, to really make their mark via ‘Cosmic Trigger’, a bold adaptation of the Robert Anton Wilson book. Hugely ambitious in its scope, the 4 hour play now moves to London where there’ll be performances at LOST Theatre in SW8, kicking off tonight and running through until Saturday – needless to say that it’s highly recommended. The backstory to all this can be accessed via ‘The Gateway Drug’, which you can read here:
https://blog.gregwilson.co.uk/2014/11/the-gateway-drug/

Its Liverpool debut was a major success, and I was so fortunate that this fell on a weekend I wasn’t out on the road – now I can happily say ‘I was there’. I was also able to step in when the legendary ambient sound sculptor Mixmaster Morris had to pull out of Sunday’s proceedings, my remit being to bring Disco to the Discordians between 8pm – 10pm, during the finale of the 3 day festival with its various elements of fantasia and phantasmagoria.

Here’s the recording, bookended by 2 topical tracks and available to stream / download via SoundCloud:

An already weirdly wonderful weekend was made all the more extraordinary by an announcement that Daisy was to marry her beau, Greg Donaldson, at 6.23pm, right there in Camp & Furnace – and a very beautiful wedding it was, surrounded, as they were, by warmth and love. With the wedding plans, as is the prerogative of Eris, the goddess of chaos, strife and disorder, throwing the schedule up in the air, I was asked to start after the vows had been spoken, to kick things into party mode – I hadn’t expected to find myself in the role of wedding DJ, but was more than happy to oblige, although my planned opening track, Steinski & Mass Media’s cut & paste masterpiece ‘The Motorcade Sped On’ (its JFK theme relevant to the play), wasn’t quite appropriate as the first record you hear after you’re wed, even if it was a Discordian ceremony. Led Zeppelin’s ‘Whole Lotta Love’ (V’s Dub Edit) seemed more suited to the occasion and would prove to be a popular choice. 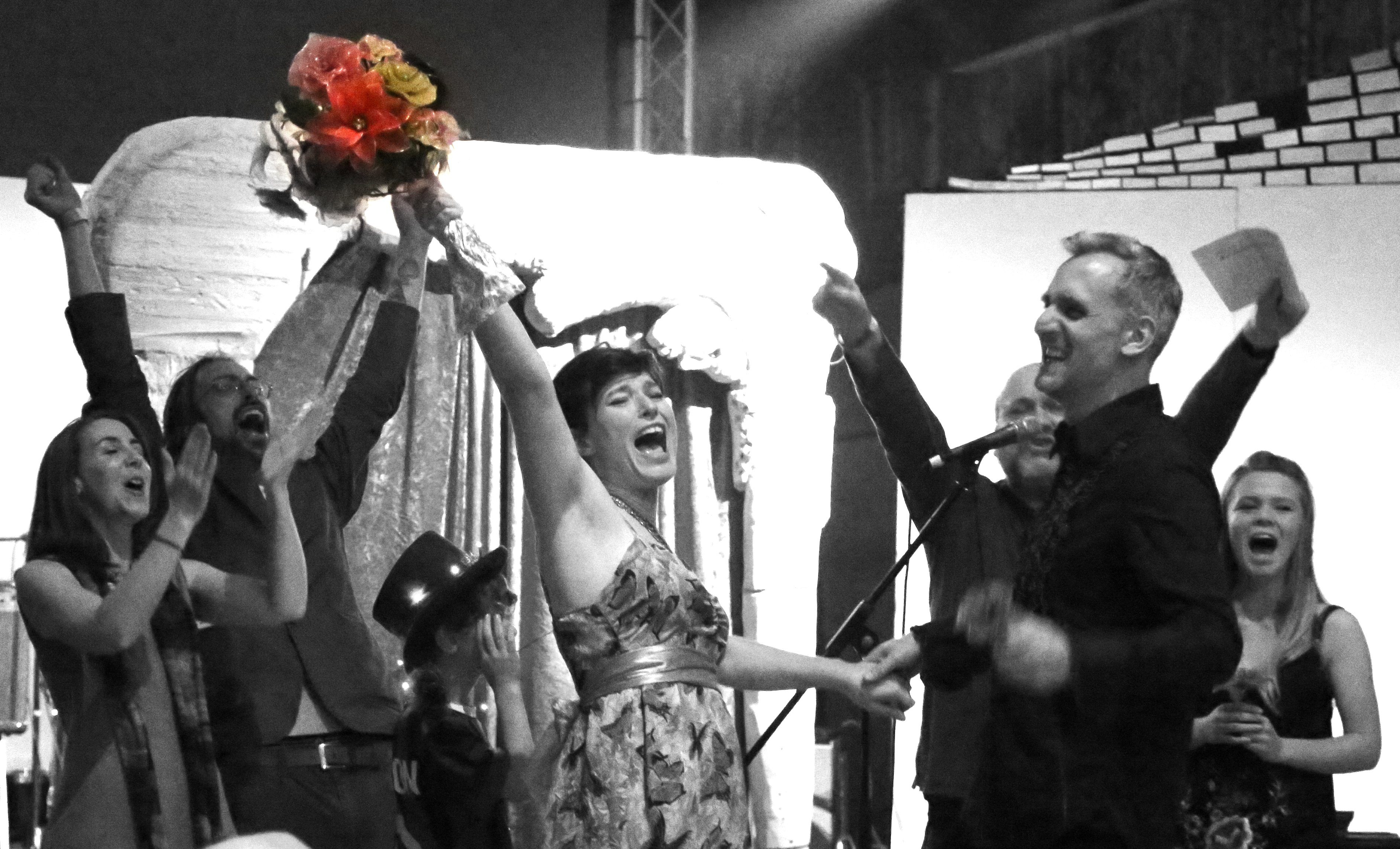 However, just before the wedding was about to roll into motion I received a hurried message to inform me that, amidst these new developments, they’d totally forgotten that there was still a band scheduled to appear, so the plan was now for them to go on straight after the nuptials and play some numbers before I started.

However, with the ceremony completed there was no band on the stage below, and I was getting signals from the sound desk to start playing. I must add that I was high up on a balcony, overlooking the room – a great vantage point, but a difficult location to receive a quick message, access being backstage and up a steep flight of stairs. There was a slight period of confusion, but it actually worked a treat as it allowed the space for an impromptu chorus of the song ‘Daisy, Daisy’ from the congregation. It was after this that I played ‘Whole Lotta Love’ and the party kicked in. But then, just a few tracks later, things went decidedly discordant. I looked over the balcony to discover the band now on stage and busily tuning up their instruments getting ready to play, seemingly oblivious to the cacophony of sound now filling the room. To save everyone’s ears further unease I quickly faded out the track I was playing and left the band, who introduced themselves as Shamanarchy, to do their thing. 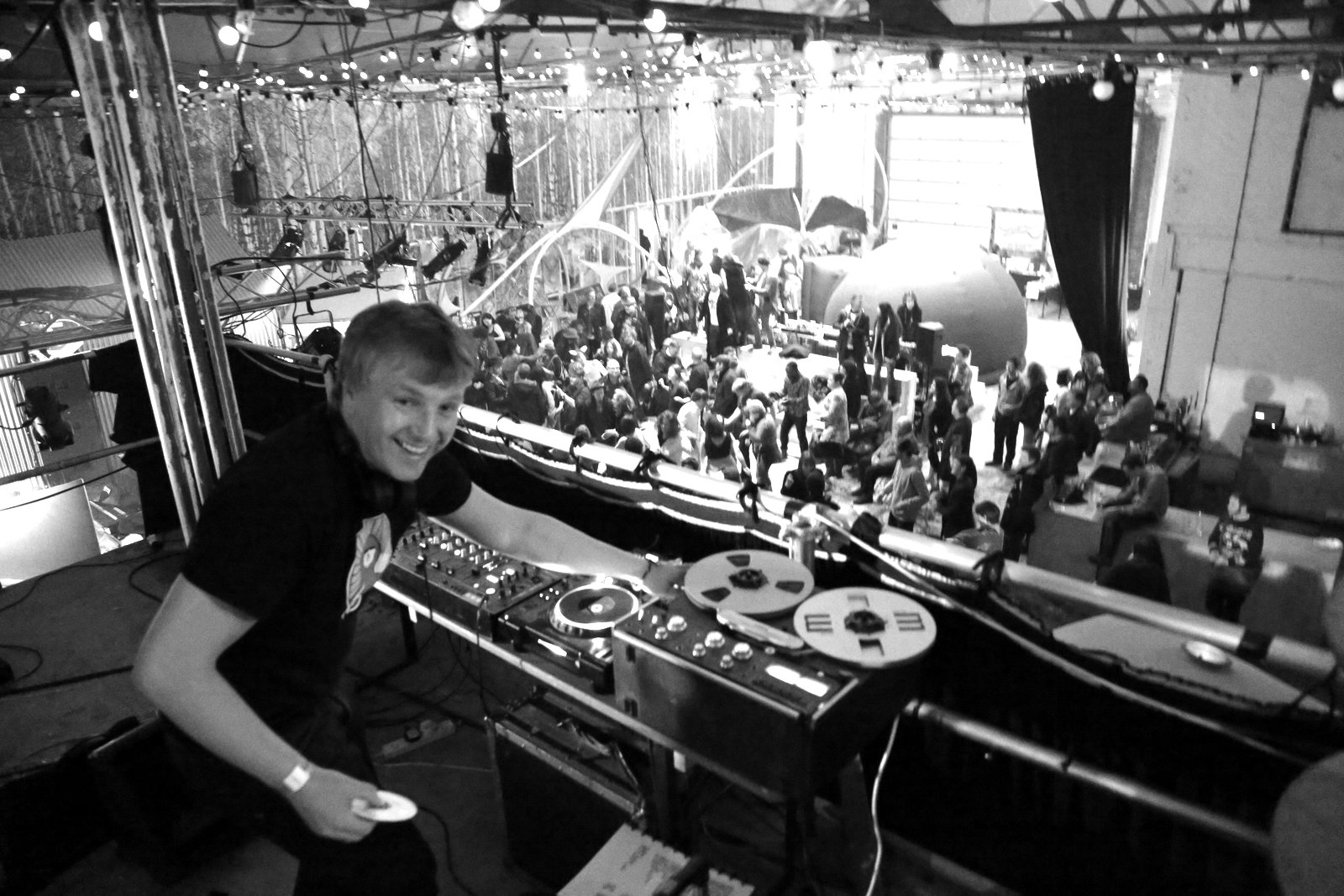 The interruption had its upside, for it enabled me to start all over again after Shamanarchy had played for about half an hour, this time with the track I’d originally intended as my opener. Furthermore it was still only 7.30pm, so I ended up playing for an extra half hour in this unique setting.

After I’d finished I was just in time to go off into a side room to view the never previously shown film of Alan Moore’s ‘The Moon And Serpent Grand Egyptian Theatre Of Marvels’, the first of his occult ‘workings’, performed in London in 1994 in the form of a monologue by Moore, who had only recently declared himself a magician. Powerful stuff on a number of levels, and a more than fitting conclusion to a potent event. It was also great to catch up with author John Higgs who kindly gave me a copy of his new book ‘Standing On The Verge Of Getting It On’, currently a limited edition of just 111 copies, which I’m obviously intrigued to read.

The events of this weekend have already gone down in Liverpool folklore, for the moment ‘Cosmic Trigger’ was staged it linked directly to ‘Illuminatus!’, presented in the city in 1976 by Daisy’s father, the force of nature that was Ken Campbell, now re-animated, both in puppet and human form, as one of most memorable characters in this karmic wheel of a theatrical production. He may have physically left this mortal coil back in 2008, but his energy and spirit are reborn through this remarkable play – expect a reappraisal of the great man’s life and career in the years to come. ‘Is it heroic?’, he famously asked, and his daughter courageously took up the challenge and made her leap of faith. This risk, I’m sure, will be well and truly rewarded, and I expect to see ‘Cosmic Trigger’ not only triumph in this country, but to cross continents in the future. 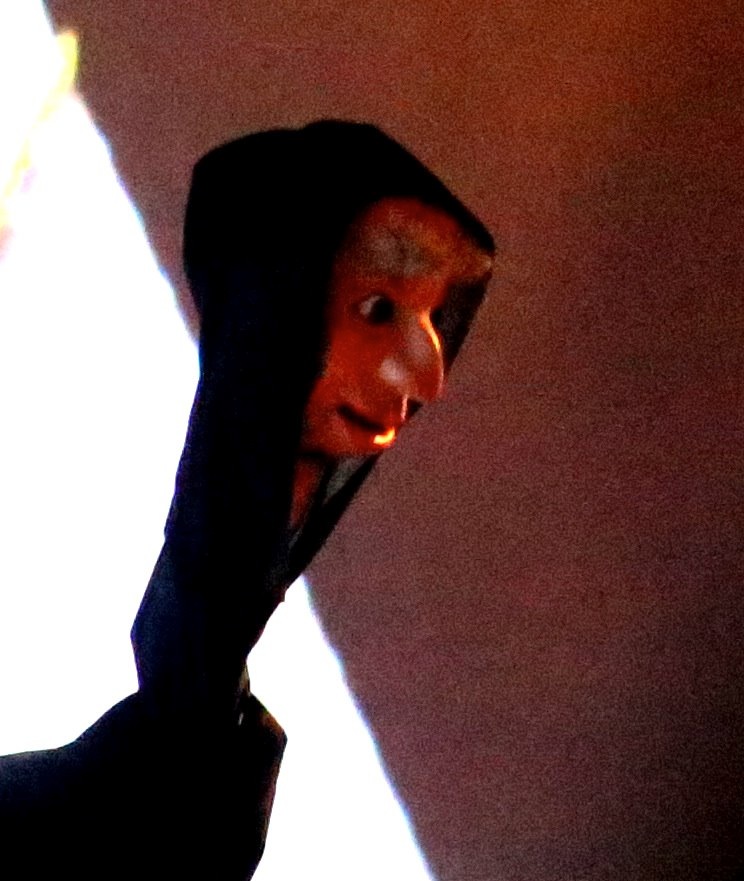 The fact I was invited to play a bit part in this weekends proceedings, whilst, when attending the preview performance 2 nights earlier, witnessing the first ever staging of the play anywhere, as Ken Campbell might have said, on ‘Planet World’ drew me directly into a narrative that dates back 87 years, to Carl Jung’s ‘Pool Of Life’ dream in 1927 – Jung’s theory of synchronicity continuing to bear its fruit.

For myself and a number of others in attendance, ‘Cosmic Trigger’ marked the completion of a sequence of gatherings commencing just over 2 months earlier with our first Super Weird Happening in Manchester, and taking in subsequent Happenings in Glasgow, Bristol, Liverpool and London, a wrap party for friends and family in Chester, plus the 23 day in Liverpool on October 23rd and a trip across the Pennines to see Alan Moore at the Leeds Film Festival (as well as touching base afterwards with Howard Marks and Dave Beer). Mucho food for the soul – it’ll take a long time before all this adventuring and finding of others properly sinks in. 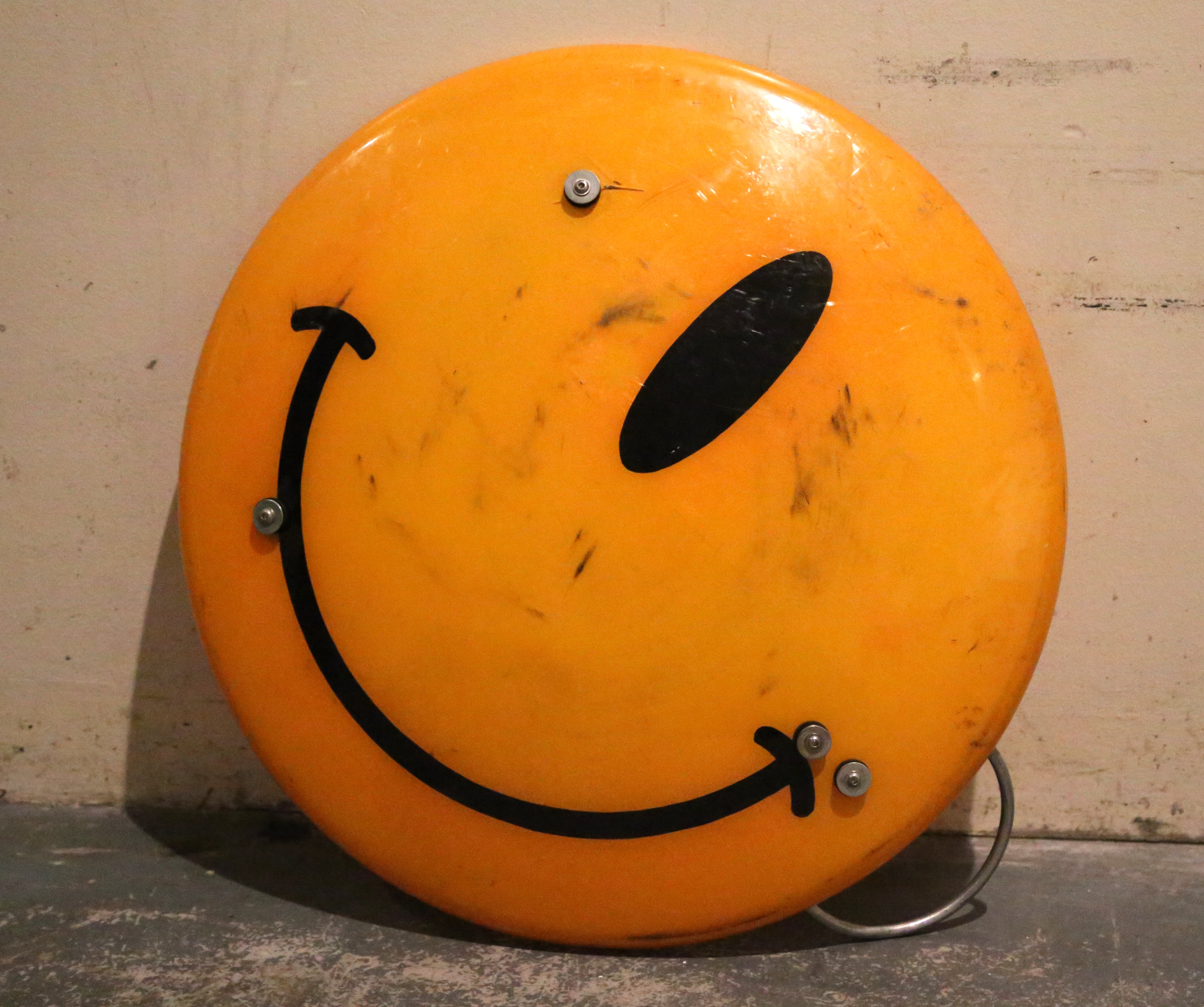