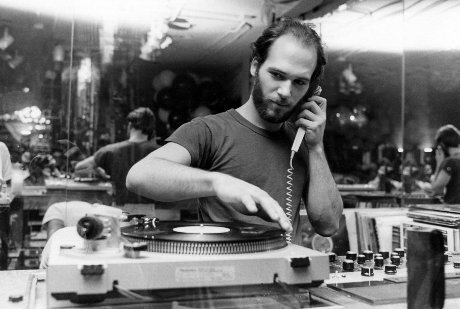 A week on Saturday I play a pretty special London gig at Loft Studios alongside NYC edit maestro Danny Krivit, the guy who set the standard back in the ’80s with his classic re-imagining of MFSB’s ‘Love Is The Message’, one of the quintessential New York Disco anthems. Full lowdown on the gig here, at Resident Advisor: http://www.residentadvisor.net/event.aspx?440816 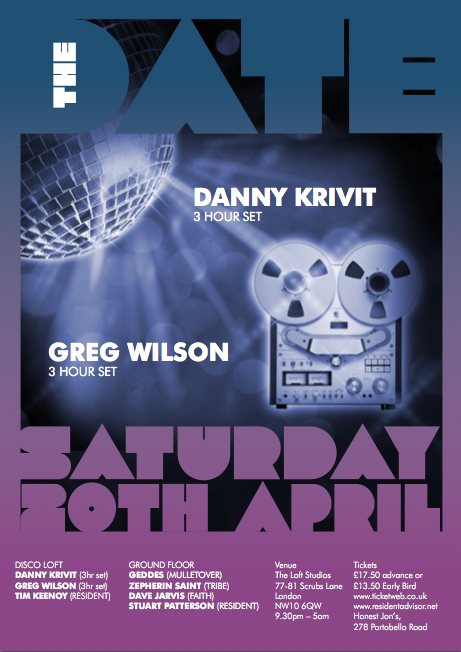 Back in 2006, I interviewed Danny about a lesser known part of his legacy, that of a leading Roller DJ on the late ’70s / early ’80s New York skate scene (particularly The Roxy), whilst researching my article on Boogie: http://www.electrofunkroots.co.uk/articles/the_building_blocks_of_boogie.html

This resulted in a secondary piece for the online magazine Discopia, called ‘Danny Krivit – Roller DJ’. Discopia unfortunately disappeared into the cyber ether not long after it was published, along with a whole host of other articles (not least a classic Danny Wang piece about his Disco awakening), so this provides me with the opportunity to re-publish here, highlighting a part of Disco culture that never really took a hold in the UK, but made a big impact Stateside.

I recently spoke to New York DJ and edit master, Danny Krivit, whilst researching an article I was writing about Boogie. Danny is a true authority on the evolution of New York club culture, having experienced it all first hand, from The Loft and The Gallery onwards. Although I only needed to verify a few points with him, I took the opportunity to ask him some questions about the Roller Disco era of the ’70s and early ’80s, which played a major part in his illustrious DJ career.

As DJ at the Roxy, New York’s most celebrated roller rink, and, later, at Laces for a 10 year period, Danny’s knowledge on the subject is, once again, from direct experience. Furthermore, he not only played the music, but was an accomplished skater himself. A story often told about Danny is that, along with his girlfriend, Daphne Rubin Vega, he would frequently go to the Paradise Garage during the daytime and skate around the dancefloor whilst Larry Levan listened to new tunes over the legendary club’s soundsystem (Levan could also sometimes be found skating at the Roxy). 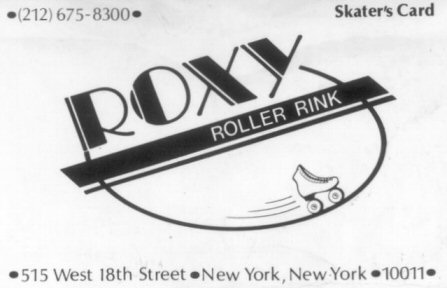 In 1982, with its popularity as a roller rink on the wane, the Roxy would convert into a dance club on Thursday, Friday and Saturday, attracting a Hip Hop audience as breakdancers, rather than roller skaters, now flocked to the venue. DJs like Afrika Bambaataa and Jazzy Jay played the tunes, whilst the Rock Steady Crew were its most famous b boys (the Rock Steady Crew can be seen battling the New York City Breakers at The Roxy in the film, ‘Beat Street’).

Roller Disco was imported to the UK, but never took off in the way it had in the States, so this is a part of dance culture that we know very little of in Britain.

Andrew Mason, from New York’s Wax Poetics magazine, had told me that Danny once explained to him that a slightly shuffled clap / snare on the 2nd and 4th beats (as opposed to a steady 4 on the floor beat) was best suited for skaters, who pushed off on alternate legs to that rhythm.

I started by asking Danny about this:

“There were certain things about certain genres of music, at the time, that were almost made ideally for skating. What would happen is that a record might be right in that tempo, like 110 or 120bpm, but if it wasn’t the right kind of groove, then it didn’t lend itself to roller skating. Basically, the tempo could go up very fast as long as it adhered to that type of rhythm. The ideal things at the time for roller skating was that whole trend of music that was kind of around the Solar sound (Shalamar, The Whispers, Dynasty etc).

“‘Good Times’ (Chic) was just the biggest thing, then you had Vaughan Mason (‘Bounce, Rock, Skate, Roll’), you had ‘Rappers Delight’ (Sugarhill Gang), you had 6 other records (in a similar style).

The music had not changed all that much, the audience just hated the title (Disco), there was a stigma about it, but there was a need for it. So this stuff was still coming out and places like the Garage were flourishing and you’d call it ‘Garage music’, because you couldn’t call it what you used to.

In general, they were records that grooved. The Freestyle thing didn’t work, Hip Hop was very jagged, and a lot of the really good soulful stuff from the ’70s could be a bit too frantic. The other thing was that there was a real tendancy to get into downtempo stuff because you were playing these really crowded places and you had to use music as crowd control. People couldn’t enjoy themselves to fast records when you had a good party, so you would either have to break up the floor and have just men only, and let them go nuts, or, most of the time, you’d play much slower, in that 100 beats-per-minute area. 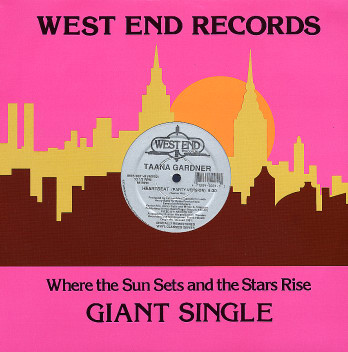 I was actually looking for records slower than that, and I remember when ‘Heartbeat’ (Taana Gardner) came out. People think of it now as this huge hit, but when it first came out clubs sneered at it. It was like ‘what do we play with that?’, because there was nothing out then, that was happening, around that tempo. It just sounded like you were on drugs, because there was no Hip Hop scene and the R&B scene was more radio or retro, but for roller skating it was just ideal.”

Primarily, the roller skating crowd (in New York) was usually 50% or more black. When the roller skating started to get more popular in the early-mid ’80s, that’s when I started seeing more white rinks, because before that those same rinks were ice skating rinks. It wasn’t exclusively black, but it was definitely more of an ethnic, you know, either a mixed crowd or more black or Latino. 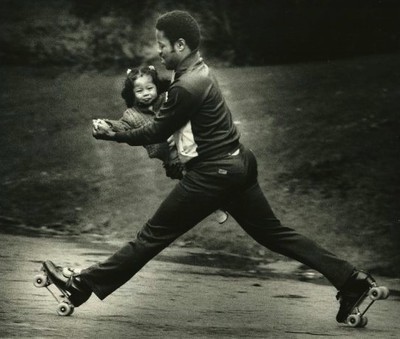 When it started hitting in the late ’70s it was a mixed crowd leaning towards an ethnic crowd. Then, towards the early ’80s, it started splitting off. The serious skaters would be in the rinks that were predominantly black or Latino, mostly black, and the whiter rinks were really more novice, with skaters that looked like they were skating to any song – it didn’t matter.”

“The rinks were very large, Roxy’s a good example, which, for roller skating, I had an unusually large crowd of maybe twelve hundred people. Twelve hundred people roller skating, cos they’re all moving around, is kind of like three or four thousand people dancing, cos they’re taking up that kind of space. The DJ booth, generally, in most rinks is in the centre. When I’m playing for a crowd and they try to stick you in some room, off to side or something, all the way up top or away from the crowd, where you just have this little window to look through, you’re getting the smallest little slither of their energy. When they put you in the middle you’re getting energy from the back of your head, everything’s hitting you from all the way round – like the pyramid philosophy, pyramid power. This was very different, you know, the whole thing of playing for them. It taught me about really playing on the groove and not just beat on beat mixing, cos you can make perfect mixes that just aren’t in the groove.

Most places had a microphone, you need it for crowd control. I wasn’t saying this record’s this or that, but plenty of times I’d have to say ‘slow down, as this guy fell over here’ or ‘now I want all the ladies to clear the floor, it’s going to be men only’ or ‘couples only’ or that we’re going to reverse, you know, that kind of stuff.” 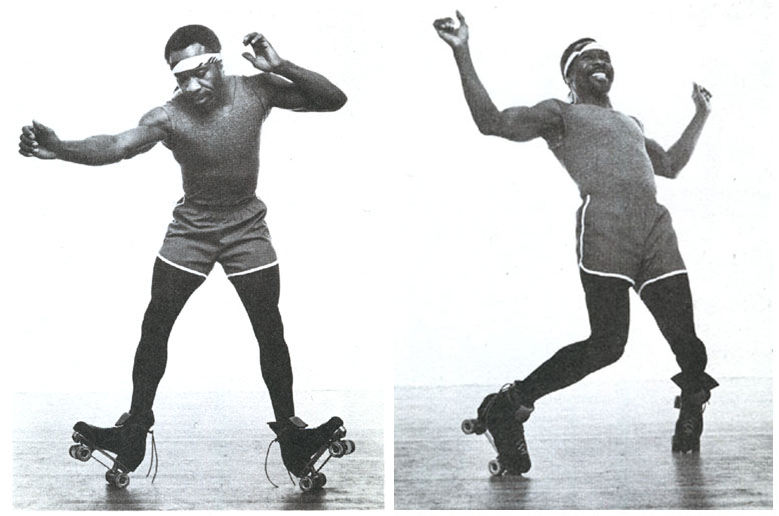 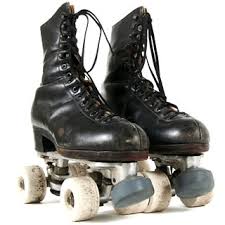