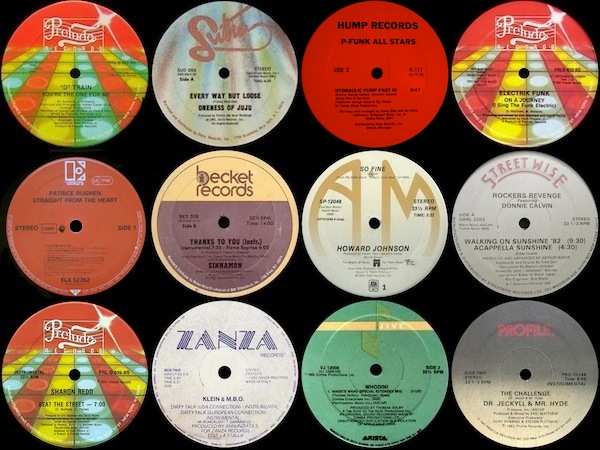 Just uploaded the December ’82 edition of ‘Early ’80s Floorfillers’, which re-visits the biggest tracks I was playing on my nights back in ’82/’83, when I was a black music specialist, resident at venues including Wigan Pier, Legend, The Exit, Berties and The Haçienda in Manchester, and The Stars Bar in Huddersfield. The series is available to stream / download via SoundCloud and my Electrofunkroots website, which includes label / record sleeve scans for all the tracks that make the chart, along with a list of ‘other big tunes’ that month.

It’s great to now have a complete month by month archive for 1982 – this wouldn’t have been possible without the weekly record lists / info sheets I gave out at the time, which included a Top 20 Floorfillers chart based on dancefloor reaction at my nights. It’s thanks to these that I’ve been able to approach this series from a definitive standpoint.

1982 was such a seminal year in the evolution of dance music, the new Electro-Funk direction, which culture-shocked the UK underground club scene out of the old (Soul, Funk, Disco, Jazz-Funk) and on into the new (Hip Hop, House, Techno). This metamorphosis is perfectly illustrated by comparing the January and December Top 10’s – January still has a definite Jazz leaning, including tracks by Lessette Wilson ‘Caveman Boogie’, The Jones Girls ‘Nights Over Egypt’, Grover Washington Jr. ‘Little Black Samba’ and Ray Barretto ‘Passtime Paradise’, whilst in sharp contrast December is Electro dominated, with Grandmaster Flash & The Furious Five ‘Scorpio’, Malcolm McLaren & The World’s Famous Supreme Team ‘Buffalo Gals’, Orbit ‘The Beat Goes On’, Whodini ‘Magic’s Wand’ and Man Parrish ‘Hip Hop Be-Bop (Don’t Stop)’. It’s a seismic shift that would cause a major schism in black music circles, many rejecting the Electro sound as mindless computerised muzak, whilst others, especially the younger black audience, fully embracing it, thus setting the wheels in motion for what would follow throughout the decade, as drum machines, sequencers and samplers took centre stage.

Dance culture would take a whole new course following the emergence of Electro, and 1982 was the crucial year, so ‘Early ’80s Floorfillers’ provides a time capsule of how this transition took place from the roots outwards, via the wealth and breadth of its underground music, which pretty much re-wrote the rules with regards to how dance tracks were recorded. I went into this in a bit more depth in October’s blog post ‘The EDM From Way Back When’:

With the year now complete, I was able to compile a Top 100 list as part of the ‘1982 Floorfillers Review’ that’s just gone online. Once again, this includes record label / sleeve scans and all main credits. You can view it here:

The top labels for ’82 were the classic New York dance imprints Prelude and West End, which both had 6 releases in the monthly Top 10s, Prelude providing 3 chart toppers – the instrumental mixes of D Train’s ‘You’re The One For Me’ in January and Electrik Funk’s ‘On A Journey (I Sing The Funk Electric)’ in April, and François Kevorkian’s instrumental remix of Sharon Redd’s ‘Beat The Street’ in September. Kevorkian was head of A&R at Prelude during this period, and also had a mix credit on ‘You’re The One For Me’, as well as 2 other tracks that made the monthly Top 10s. This total of 4 ‘mixed by’ credits was also shared with 4 others – Arthur Baker, Shep Pettibone, Tee Scott and the duo Nick Martinelli & David Todd.

The largely unsung Eric Matthew was the most prolific producer working with an assortment of artists on the Profile, Prelude, Becket and Radar labels. 7 of his productions would feature in the monthly Top 10’s (4 being co-productions with Darryl Payne, including the highest placing, Sinnamon’s ‘Thanks To You’, which took the year end #2 position). Matthew (real name Joseph Tucci) set up Radar in 1982, and would also make the Top 100 list with a further Radar production, ‘Knock Me Out’ by Gary’s Gang – the fact that he had 8 massive tunes in a 12 month span is testimony to just how prolific he was that year, and how his contribution to underground dance music has barely been touched upon. He first made an impact as part of Gary’s Gang, co-writing and producing their late ’70s material, including the Disco hits ‘Keep On Dancing’ and ‘Let’s Lovedance Tonight’, for the Sam label, but his early ’80s recordings are, in my opinion, his most important, his work, in retrospect, at the very gateway of change, symbolising these changes. 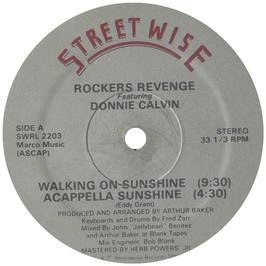 The biggest record of the year on the underground scene, ‘Walking On Sunshine’ by Rockers Revenge Featuring Donnie Calvin, would, unlike the majority of tracks in the Top 100, subsequently become a huge hit in the UK, reaching #4, and providing the perfect example of how the upfront DJs could break dance records here, resulting in major crossover success that year for a track that had failed to dent the top 75 when the original version was released by Eddy Grant in 1979 (it was the only Eddy Grant track to fail to make the Top 40 between ‘Living On The Frontline’ in ’79 and ‘Electric Avenue’ in ’83). The point being that the success of ‘Walking On Sunshine’ was not a given, and, despite being a huge dance tune, it failed to find similar crossover success in its country of origin. Produced by the great Arthur Baker, who is widely regarded as the most influential dance music producer of the early ’80s, the impact of his studio innovation immense, ‘Walking On Sunshine’ is an era defining record par excellence, which remains an enduring electronic dance anthem 30 years on. 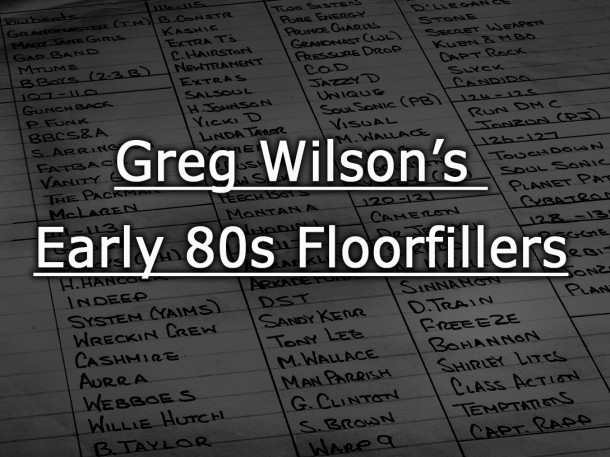 All editions of ‘Early 80’s Floorfillers, plus full accompanying info, can be found here:
http://www.electrofunkroots.co.uk/category/record-lists/