By Greg Wilson on May 30, 2012 in CD’s / Digital, DVD, Hear, Live Performance, Living To Music, Records, Remixes / Edits, The Eighties, The Seventies, Video 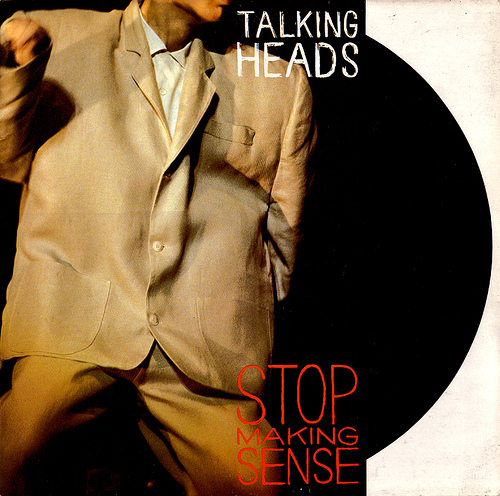 This Sunday (June 3rd) at 9pm, you’re invited to share a listening session with some likeminded souls, wherever you might be. This can be experienced either alone or communally, and you don’t need to leave the comfort of your own home to participate. Full lowdown here:
https://blog.gregwilson.co.uk/2010/06/living-to-music/

Only the 2nd live recording selected for Living To Music (the first being James Brown ‘Live At The Apollo’ last Sept: https://blog.gregwilson.co.uk/2011/08/living-to-music-james-brown-live-at-the-apollo/), ‘Stop Making Sense’ is the soundtrack to a brilliantly original stage performance, which is available on DVD and highly recommended. However, I don’t want to muddy the waters, so let’s keep to audio for now (but give yourselves a treat and check out the video footage at a later time). Certainly one of my favourite live performances – this was a band absolutely at the top of their game, with a frontman who many would say was the coolest dude on the planet back then. David Byrne (vocals / guitar), Jerry Harrison (keyboard / guitar), Tina Weymouth (bass) and Chris Franz (drums), once leading lights of the New Wave, were appealing to an ever growing audience, with their biggest hits still ahead of them.

As if this wasn’t already a powerful enough line-up in its own right, bringing the Funk to the table, the band is gradually supplemented by a trio of serious kick ass black musicians who’d appeared on their previous album ‘Speaking In Tongues’ (1983), namely Alex Weir (guitar), Steve Scales (percussion) and, of course, Parliament / Funkadelic mainman Bernie Worrell (keyboards), as well as one of the sassiest b vox combinations you’re likely to come across, Lynn Mabry and Ednah Holt. The chemistry between the 9 performers is a joy to behold.

The original album release in 1984 only featured 9 tracks, but in 1999, to mark the 15th anniversary, a 16 track version was issued. Feel free to choose between the 2 – I’ll be going for the ‘Special New Edition’.

As many of you will already know, my edit of the opening track, a whole new take on their earliest hit, 1977’s ‘Psycho Killer’, has been a massive tune for me during recent times, plus a number of other DJs, including Andrew Weatherall and Optimo. Hear it here on YouTube:
http://youtu.be/HZdAmQlvgLA

A second big edit from the album came courtesy of Cosmic Boogie, who squeezed even more juice out of ‘Slippery People’:
http://youtu.be/xuT0XPZx3Z8