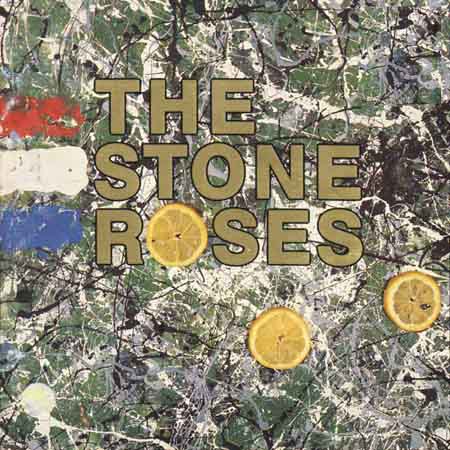 On New Years Day at 9pm, you’re invited to share a listening session with some likeminded souls, wherever you might be. This can be experienced either alone or communally, and you don’t need to leave the comfort of your own home to participate. Full lowdown here:
https://blog.gregwilson.co.uk/2010/06/living-to-music/

As we enter 2012 I thought this would be the ideal Living To Music choice to kick off the year, especially given that the first Sunday in January is also the first day of a new year. This highly acclaimed and much-loved 1989 LP, which perfectly caught the mood of the times, provides us with the opportunity to re-visit the past, whilst looking ahead to the summer. When an announcement was made earlier this year, that The Stone Roses are to re-form for 2 shows at Manchester’s Heaton Park in June 2012 (with a 3rd later added), there was genuine intrigue and anticipation. This wasn’t a case of another comeback cash-in, but something more symbolic. If ever there was a band with unfinished business to accomplish, it’s The Stone Roses. 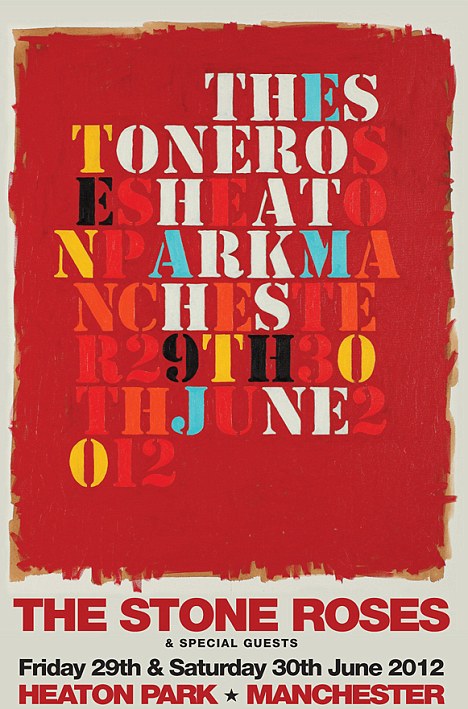 I first came across them in the summer of 1989. I was living in London at the time, sharing a house in Wembley with Brian Cannon, a young graphic designer fresh from his degree course in Leeds, who I knew from my time in Wigan (I’d first come across him in 1984 via a graffiti piece he’d sprayed on a Wigan wall). I’d brought him in to work on the Ruthless Rap Assassins, who I was managing and producing. The Assassins had signed to EMI, and the first of their 2 albums would appear the following year – see: https://blog.gregwilson.co.uk/2010/07/killer-album. It was Brian who brought The Stone Roses’ music into the house, initially 12” releases like ‘Sally Cinnamon’, ‘Elephant Stone’ and ‘Made Of Stone’, and then this wonderful album.

It was during the mid-late ’80s that my Beatles obsession was it its height and I eagerly absorbed everything I could that was associated with them. ‘The Stone Roses’ evoked that mid-’60s Beatles / Byrds sound, although, paradoxically, it didn’t feel nostalgic, but fresh, vibrant and here, now. It perfectly linked back to that long-lost ’60s ethos, whilst appealing to the Acid House generation, who might be dancing to repetitive beats in the clubs, but were likely to be chilling out afterwards listening to this inspirational long player. It also caught the moment when LSD temporarily re-appeared at the cusp of British youth culture – a far cheaper alternative to ecstasy, which was selling for between £15-£20, whilst acid was only a couple of quid for a spaced out 8+ hour trip (ecstasy was, however, regarded as far more conducive to clubbing, so once the price came down, acid soon disappeared).

By tuning me into The Stone Roses, and the Happy Mondays for that matter, Brian was, in a sense, reciprocating, for a few years earlier I’d sat him down to listen to my recently discovered big obsession when he came to visit me in Liverpool. ‘What have you got for me this time?’ he said, ‘The Beatles’ said I, ‘The Beatles?’ he repeated with a bemused expression that asked ‘have you gone totally mad?’ (it would be almost a decade before Oasis made it cool to be into The Beatles again). ‘Just sit and listen’ I told him. He did, and during the years ahead he’d absorb all the references that would serve him so well later down the line, when he hooked-up with another Beatles obsessive, Noel Gallagher, becoming the designer for Oasis, and a key member of the band’s inner-circle. He’d met Noel at 23 New Mount Street in Manchester, where I’d opened my Murdertone office on moving back up North in 1990, the Rap Assassins, of course, being from the city. Noel then worked for the Inspiral Carpets, who also had an office in the building, then, in many respects, the creative hub for Manchester’s small but vibrant music business. With the Rap Assassins album imminent, Brian took an office next to mine, he’d call his company Microdot, a name I suggested to him (it was a type of trip doing the rounds in Manchester at the time). Microdot, which later re-located to London, will be forever associated with the Britpop movement, with an in-demand Brian designing sleeves not only for Oasis, but The Verve, Cast, Suede, and others. Only last month he picked up Lifetime Achievement recognition for his work at the Annual Design Awards.

Just the other day, I was up in the loft rummaging around when I came across the cassette I made for Brian on that aforementioned mid-’80s night in Liverpool, which must have come back into my possession when we shared the house in London – a compilation called ‘My Very 1st Beatle Tape’: 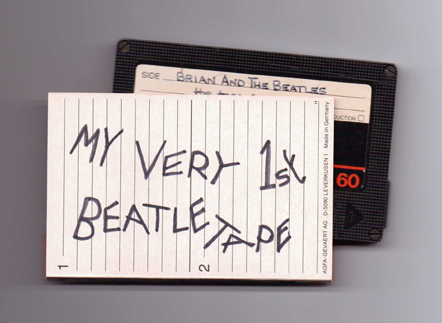 Back to the Roses. It’s easy to forget that this is an album that barely crept into the top 20 of the UK chart when it was first released back in 1989 – its peak position of number 5 not being achieved until 20 years later, in 2009. Back then, as Madchester was, for those of us fortunate enough to experience it directly, the centre of the musical universe, it felt like the Stone Roses were the biggest band in the land, when in reality this was all about the underground breaking gradually into mainstream consciousness. To consider the album in this context helps capture its essence, as an absolute breath of fresh air, which, although echoing the ’60s, perfectly encapsulated the era in which it was made, with all its energy, ecstasy and experimentation.

Their implosion is the stuff of legend, as the band, and all the dreams wrapped up in them, slowly unravelled. In short, having taken 5 years to record the all-important follow-up album, ‘Second Coming’, they’d let the grass grow under their feet and the new kids on the block, Oasis, a group that readily cited their influence, rode off into the sunset of superstardom many thought was the destination the Roses had mapped out before them.

During the early ’90s I often worked out of Square One Studios in Bury, where the Roses were camped out, and it was clear to everyone that there were big problems. With the pressure of expectation acute, the muse was hiding away and the group dynamic became increasingly unhealthy. It was a negative spiral, and their producer, John Leckie, eventually lost patience and jumped ship, with the band subsequently re-locating to Monmouth, where the album was finally completed – unfortunately, about 4 years too late.

Despite only recording the 2 albums, they left a huge legacy, their debut album regularly coming high up, and even topping, the best ever lists here in the UK. Like many, my greatest personal memory of the group was the almost mythical Spike Island gathering on 27th May 1990 (I also attended their infamous press conference the night before, which was hugely entertaining). I spent the event in the guest enclosure in a suitably ecstatic state – it was a ‘Go Bang’ moment when it felt like I was with all my friends at once (certainly a wonderful grouping of them, including Brian Cannon, musician / journalist John Robb, who would later write a book about the band, and Ian Tilton, whose photographs adorn the sleeve of their debut album). I described the day in Sarah Champion’s book, ‘And God Created Manchester’ (1990), as ‘like being in the Garden Of Eden‘ – it was far out, as the hippies used to say;  the peak of that magical Madchester vibe that would soon turn sour.

The Stone Roses will always have a special place in the hearts of those of us who lived those heady rave on days in the rainy city, when their music became ingrained into our being. In Dec 07 I was the final DJ, bar the residents, to play at Manchester’s now fabled Electric Chair – one of the city’s most important club nights in recent memory (more here: https://blog.gregwilson.co.uk/2011/10/manchester-vibes-in-the-area/). I wanted to finish off with a track that truly summoned up the spirit of Manchester, and settled on ‘I Wanna Be Adored’ – an ethereal anthem from an era that placed the city at the forefront of popular culture. Whilst ‘Fools Gold’ is obviously the Roses track most geared to the dancefloor, ‘I Wanna Be Adored’ evoked the unity evident in that E’d up epoch, subsequently echoing through to the Electric Chair and still dearly cherished by those who experienced it first hand, whilst becoming a source of continued fascination for those who didn’t. Thankfully I can say ‘I was there’, and when I played ‘I Wanna Be Adored’ that night, 18 years on, I knew that the same memories resonated strongly with others – only a great album can be of its time whilst, paradoxically, remaining timeless, and ‘The Stone Roses’ certainly fits this description hand in glove and deserves all the adoration it generates.