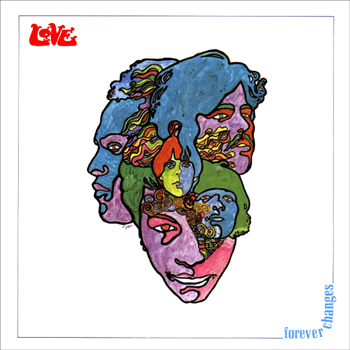 This Sunday (May 1st), at 9pm, you’re invited to share a listening session with some likeminded souls, wherever you might be. This can be experienced either alone or communally, and you don’t need to leave the comfort of your own home to participate. Full lowdown here:
https://blog.gregwilson.co.uk/2010/06/living-to-music/

Described as ‘one of the first racially diverse American pop bands’, Love, led by Memphis born ‘black hippie’, Arthur Lee, broke the mould. Hailing from Los Angeles, the band issued their self-titled debut album in 1966, following up with ‘De Capo’ in early ’67, before releasing the LP they’re best remembered for, ‘Forever Changes’ towards the end of the same year.

Major commercial success eluded the band, their highest chart placings being in the UK rather than their US homeland  – ‘Forever Changes’ reaching number 24, with ‘Out Here’, a 1969 release, peaking at number 29. However, their cult status has endured and ‘Forever Changes’ regularly appears on best all-time album lists, most notably NME, who placed it at number 6, Rolling Stone, where it came in at number 40, and Mojo, where it was number 11 in the main list, whilst being named the second best psychedelic album ever.

‘Forever Changes’ was recorded on the West Coast at the height of the psychedelic era – in Hollywood’s legendary Sunset Sound Recorders during the fabled ’67 Summer Of Love, when California was firmly positioned at the centre of the cultural universe.

One of the main plusses of the Living To Music sessions is that they’ve enabled many of the participants to listen to recordings they’ve never previously heard. So, with this in mind, I thought it only right that rather than just selecting albums I already know and love, I should from time to time provide myself with the opportunity to pick something I’ve personally intended to listen to, but never got around to. I’m somewhat ashamed to say that ‘Forever Changes’ falls into this category for me, having, to date, eluded my ears in its entirety. I thought it was high time I put this right.